The Best Dressed Man in the Music Industry

I’m sitting in the passenger seat of a BMW estate, eating coconut and mango ice cream. At £2.50 a scoop it's a bit pricey, but no one comes to a music festival for cheap ice cream.

I’ve got the engine running. It’s late evening, early September, in a field in the English countryside and I’m not going to sit here and pretend I’ve not turned the heated seat on.

My name is Andy Inglis and I’m an Artist Manager, Tour Manager, Lecturer, and sometimes it’s my job to sit in the passenger seat of a BMW and eat ice cream.

In an hour or so, after my artist (Will Doyle aka East India Youth) and sound engineer (George) have finished watching Sufjan Stevens, I’ll drive us back to our Airbnb, along unlit, unfamiliar roads. We’ve been here the whole day and they’re a bit loose; earlier I saw them crowd-surfing during a Fat White Family show. We headlined the Big Top at End of The Road Festival last night and tomorrow we fly out from Bristol into Dublin to play another festival. The show was great.

Maybe four thousand people, and Will up there alone, thrashing around, tethered to his instruments but entirely unhinged, his physical theatrics surprising those who were expecting nothing more engaging than a guy nodding behind a laptop.

I love working at festivals, behind the scenes, hanging around with the production crew and security. I haven’t been to one as a punter for over ten years, after being offered heroin at half past ten in the morning at T In The Park, then watching a lad drinking Tennents Lager though a catheter attached to a colostomy bag slung over his shoulder. I watch bands for a living. It’s the last thing I want to be doing for fun.

These days I wear one of three identical suits, seven identical shirts, and one of eight ties of varying hues and styles.

Will and George return to the car in high spirits. I put Sea Oleena on, get on the road. George’s head drops next to me, Will’s vanished from the rear-view mirror, curled up on the back seat. Nine months in and it already feels like a long year. We released the album in April and we’ve been doing shows and promo to support it since then. Toured North America a couple of times, Japan for a week, a large part of Europe, Russia, and on it goes until mid December, then we’ll take a break. In late January there’s a two week tour of Singapore, New Zealand and Australia and then… I really have no idea. We’ll be coming off the road so he can write the third album and I’ll need to find something to do, somewhere to go. 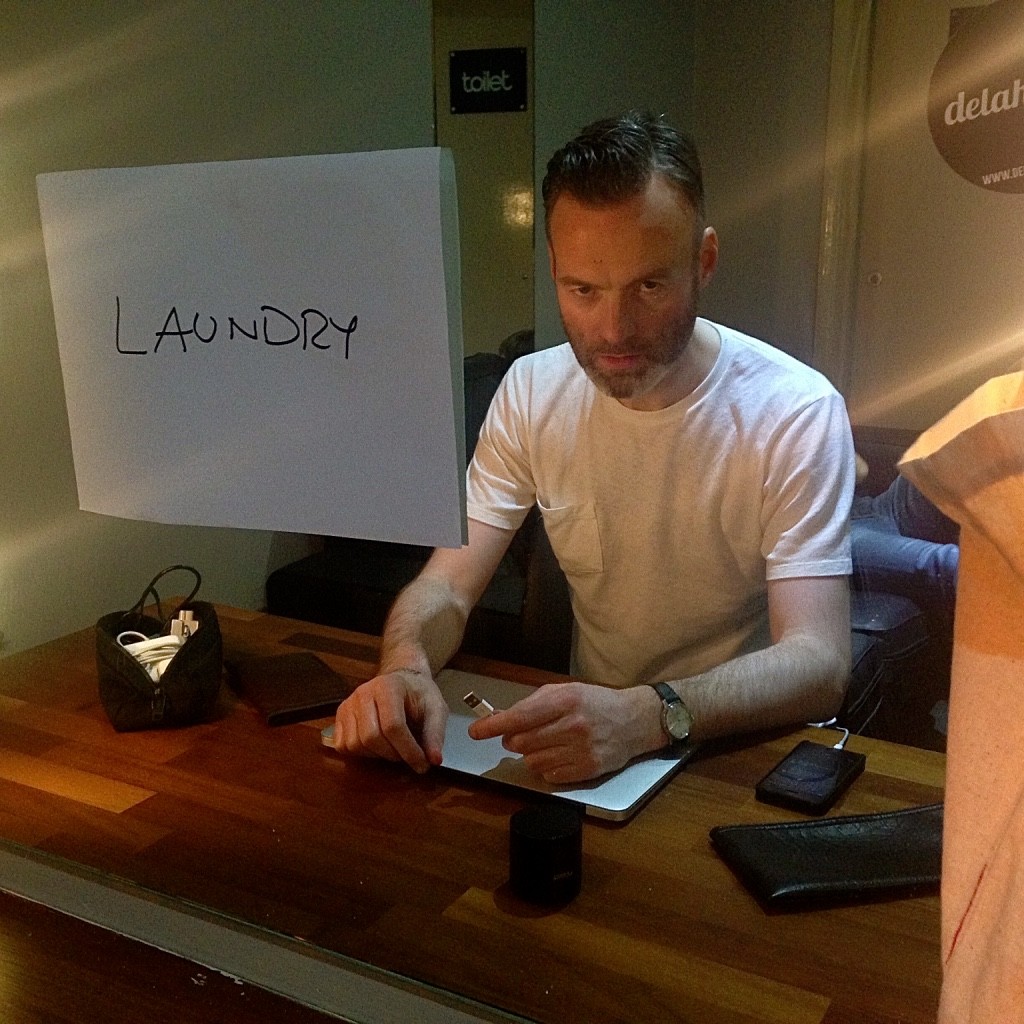 I moved to London in 1997 and, other than a couple of stints in Norway and Belgium, lived there until 2012, whereupon I gave up my flat and sold or gave away most of what I owned, save for a few winter coats in the attic. I used to be obsessed with clothes, like you. These days I wear one of three identical suits, seven identical shirts, and one of eight ties of varying hues and styles. My working days can sometimes last for twenty hours, and can be hugely mentally and physically demanding. The last thing I need in the morning is a sartorial choice to make.

My attire is frequently commented upon:

A shirt and tie has a curious effect on people. I can stride into places I’ve no right to be, and those around me just figure I’m allowed. And since I’m more or less the only one dressing this way on the production side of the entire global live music industry, people remember me. But it can close doors too. I based myself out of Berlin for five weeks this summer - with occasional trips to London, Stockholm and Riga - and in Berlin shirts and ties equate to finance, to capitalism, and capitalists are the enemy. People stare. Really stare. I stare back. They keep staring. Not many world capitals have such a prominent anarchist/far-left movement though. A friend of mine was away and gave me his apartment and the desk at his shared office. For seven days and nights I shuttled back and forth on the U-Bahn, back and forth, back and forth, as people do in their lives. Lovely apartment. Big and bright. Great office. Many friendly people, some friends and acquaintances. A nice situation. Until the eighth morning when I woke up, head in my hands, and had to talk myself down from packing up and moving into a hotel. I hadn’t spent that long in the same place in over three years and I was freaked out. Physical stasis makes me uncomfortable, so living in one place or having any kind of romantic relationship are apt to cause me great consternation.

We flew into Dublin the next morning to close the Other Voices stage at Electric Picnic Festival that night. Will pointed out that Interpol were playing. My friend Brian is their Tour Manager, overseeing a travelling party of around fourteen. Brian is from Houston, TX, wears a substantial beard and fixes cars with his hands. We shot the breeze for a few minutes and I said to Will and George that, while I loved them dearly, I missed the days of travelling with a full band and crew, despite the hassle this can bring. In fact, I miss it because of the hassle. I need grief, adversity, problems to solve, insurmountable logistical cliff-faces to scale. Someone being ten minutes late for lobby call doesn’t cut it. I want U.S. Border Control raids on the tour bus, crippling mystery illnesses that afflict the singer three hours before stage in Tokyo, and terrifying electrical storms that threaten to wreck entire festivals. Which, in the case of the latter, I faced in August in a small hilltop town in Sicily.

The first thing we noticed was the change in air pressure, eating outside, under a gazebo, in a back alley, as guests of Ypsigrock Festival in Castelbuono. We saw the sky darken and heard the first, distant, growl of thunder. The day had been typically cloudless, and a relentless, glaring heat of around 36º had me standing behind Will on stage during soundcheck with an umbrella, keeping the sun off his face, and his laptop and MIDI controller in some kind of shade so he could see what he was doing.

We finished our meal and got up to leave just as JP and Davis - the Lighting Designer and Backline Tech for headline act Metronomy - ran out of a different part of the restaurant toward site. They’re just being cautious, I thought, and we strolled onto the main thoroughfare of this beautiful settlement in the shadow of the Madonie Mountain Range, as locals and tourists dodged and swerved between us to find cover. The wind had picked up and dense grey clouds were slowly closing in above. We paused often, taking pictures on our phones of a mesmerising change of light as we entered the main square. About a hundred people had gathered under the cover of the awning of the main church, and they watched us with a pity reserved for idiots, the waiters darting around, grabbing tables and chairs, a typically laid-back evening disintegrating around them. We met Andreas, a tall German photographer who’d taken pictures of Will earlier that day for a documentary the festival had commissioned, and as I expressed my amazement at the measures everyone seemed to be taking for a thunderstorm, he took a slow look around.

The rain started, softly at first, as the portentous sky continued to blacken, and we turned and moved to cover the last two hundred metres to the entrance of the festival site, to the confines of the medieval castle in which the stage was housed. I took a small umbrella from my bag and, as I opened it, the storm hit, suddenly, as if a switch had been flicked from ‘Ominous’ to ‘Destroy Everything’. 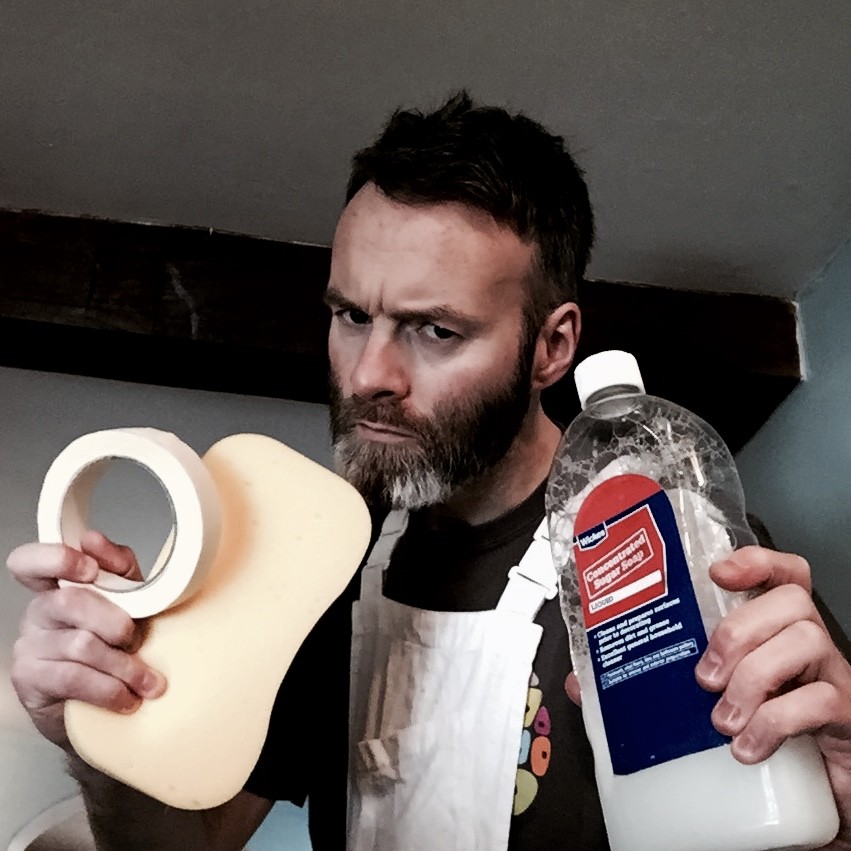 In under five seconds I was enveloped by the heaviest rain I’ve ever witnessed, and Will and George took to their heels, charging up the hill, clinging to the side of the buildings. I sprinted after them but they quickly vanished in a biblical torrent. I reached the entrance to the castle, security guards barring my way. I took the umbrella down to retrieve my Artist pass from my pocket and was instantly drenched. “Closed!” he shouted over the barrage. “CLOSED!”. “I have to get on stage! My equipment!” He was unmoved. Another guard recognised me and let me through. I ran past members of bands and crew huddled in doorways, and onto stage which had been hydraulically lowered and was now half its former height, the lighting trusses lying on their sides. I saw two of the stage crew try to pull a cover over an amplifier, and as the wind denied them they relented and ran for cover, beaten back by nature. I was alone up there and saw that someone had covered our gear in tarpaulin and towels, but much of it was exposed, the wind and rain now ripping across the stage horizontally.

Physical stasis makes me uncomfortable, so living in one place or having any kind of romantic relationship are apt to cause me great consternation.

I scrambled around, alone, soaked to the skin, recovering what I could, stumbling over cables and stands, my path intermittently illuminated by the lightning. For some reason I stopped and looked up, out over the audience area, deserted, as the storm continued to grow in intensity, directly above me now, unleashing everything it had with a violence and malice I’ve never experienced. If I hadn’t been so focussed on covering the gear, I’d have been terrified. It was so loud I couldn't hear the voices shouting at me to get the fuck off, to safety, as the Gods did their best to wipe Ypsigrock off the face of the Earth.

With hindsight it was more or less the dumbest thing I've ever done. Miraculously, two hours later, thanks to Herculean efforts led by the stage crew, Will walked on to a sold-out audience and delivered a triumphant show, capping one of the most memorable weekends of my life.

Later, we walked back down the hill to the town square, and stood there, enjoying the late evening, the tables and chairs back in place, families and festival-goers enjoying the warm summer air. We talked about the show, and the storm, and ate ice cream because sometimes, at the end of a twenty hour day, it’s my job to stand in the square of a picturesque Sicilian town and eat ice cream.

Andy Inglis presents a one-day tour management course The Road To Tour Management 2016 on 22 February from 10am-6pm at the University of Westminster, London. Book online and use promo code LOBF2016 to get £20 off the total price.