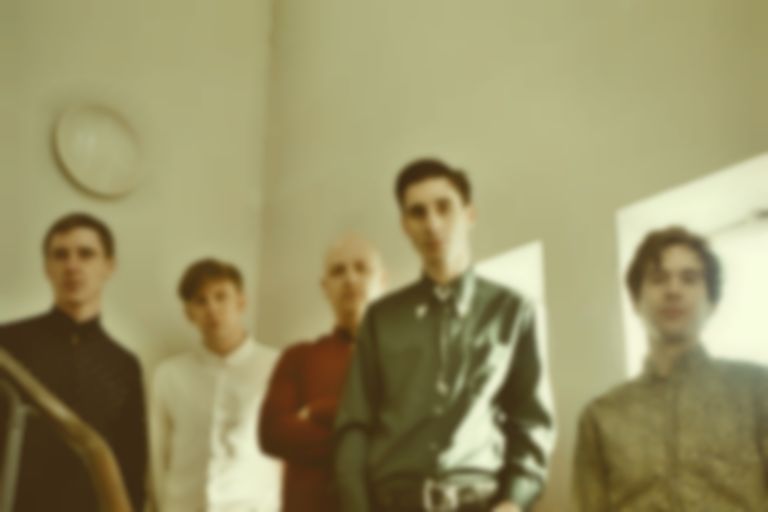 After having well and truly wooed us over the past two years with singles such as ‘Two Islands’ and ‘Everything All The Time’, anticipation has been high to hear what Liverpool’sOutfit would come up with when tasked with creating a full length record. So in the week that the band release their long awaited, much anticipated debut, we catch up with the five piece to find out which ‘dos and don’ts’ were picked up while recording their album Performance.

From sampling the noise of a really bust-up tape delay to the usual buzzes, hums and hisses of shonky equipment, sometimes the idiosyncrasies of something not properly working make for a more interesting sound. Other times you have to wrestle a good sound out of something really on its last legs – the zither used for ‘Spraypaint’ was so bad at holding its tuning we had to sample each string individually.

Wirral’s favourite son, John Peel, once said “Somebody was trying to tell me that CDs are better than vinyl because they don’t have any surface noise. I said, ‘Listen, mate, life has surface noise.” It’s actually true that without the noise, a really high quality recording sounds a bit strange, perhaps even too clinical. So, just for those of you listening on CD or MP3, we added a load of tape noise to some of the tracks, as well as some ongoing clanks and clunks that just, somehow, make it sound right. Ditto the slow detunes and slight distortions thrown in whenever something feels a little too clean – sounds need a good bit of scuffing now and then, like a too-new pair of school shoes.

…otherwise you’ll get to the end of the working day, realise you have no food in the house, then it’s off to Tesco with you for another of those packs of pasta that taste like johnnies full of sand.

Sure, somebody’s got to do it, but Chris will resent whoever this is for the rest of the day. Think of it like cleaning a lion’s cage – first distract him with a sacrifice of some kind (energy drink / ciggies), then take your chance. Be careful not to get confused with this analogy – you must never try to clean Chris’s room.

You can’t always “split the difference” on creative decisions, you might end up with a watered down version of both options. The band had savage arguments about the arrangement of the track ‘Performance’, with a fairly even split, but democracy would’ve just got us a stinky coalition that no one fully believed in and none of us really wanted – who can get behind that?

At first when you’re a new band everyone wants to write about your handful of demos, first couple of big shows… then you go to record an album and essentially disappear. You’ve grown addicted to those little pieces of recognition and now you’re clucking, wondering if anyone still knows who you are, what they might be expecting… forget it. You might go into the studio and do something great and no one’s going to review, talk or tweet about it, in fact it’ll be months before anyone even knows you’ve been busy; enjoy it on your own terms. As John Candy’s character in Cool Runnings says, “if you’re not enough without that gold medal, you’ll sure as hell never be enough with one”.

7. It’s hard to listen closely, even harder to talk about it.

As a musician, the very first time you make a “proper” recording, something terrible happens; it doesn’t sound like you expected. This is the start of a long journey of working out how to express what’s “wrong” with that hi-hat sound, what’s missing from that chorus, why that change just doesn’t quite… (here you will probably do some inscrutable wrenching motion with your hands). Dave and Andy have worked a long time together and gradually built up a common vocabulary – just listening to their discussions while we were making the album taught me a lot about how sounds work together and ways you can talk about them. For that reason I’d love to witness the world through Dave’s awareness for a while – I think that, with such a more developed framework of reference, his experience of hearing might really be rather different to mine.

8. On a personal level, we’re a really tight unit.

We’d all lived together before, but working for months in a windowless studio, living on a shoestring in the flat upstairs, essentially being in each others pockets while working on something that was and is, for all of us, a culmination of our lives’ ambitions to date…it was a stressful situation to be in, and we could have burnt out or blown apart all too easily. There’s an almost embattled sense of coming together under pressure, though, we look out for each other and there’s always someone there to stop you taking yourself too seriously. Sorry, I think I’ve just got something in my eye.

9. In some ways, we all think of ourselves as being in a different band.

It’s hard to describe your own music, and caught unawares we often give quite varied answers. Similarly, we might be working on a song and I’ll think “Yeah, that sounds so Pink Floyd”, and I’ll have to make sure I don’t say it to Tom or he’ll get put off. I think it’s a good thing because it means when we arrange Andy or Tom’s songs we all have our own approach – we try to make something ‘Outfit’ out of the different things we like.

Aside from the danger of killing each other, or turning dead-eyed and grey-skinned in our dark studio, taking a break gets you out of the echo chamber and into a world with new influences to be reaped. Traffic, rain, wind, footsteps… with the heightened auditory awareness of someone who’s been listening to the same sound for two hours it’s a great way to break old sonic habits.