The 90s punk revival may not have fully found its feet yet, but the impression the movement made on music, and indeed popular culture, will continue to resonate as long as faded Ramones tee-shirts exist in circulation across the world.

For Waxahatchee, aka Katie Crutchfield, the punk clubs of Birmingham, Alabama proved musically and characteristically inspiring; “I saw The Soviettes when I was in high school. It was the first time I saw women in that sort of gritty environment being so strong. I’d seen indie bands play proper venues where it’s glamorous and there’s lights, they don’t set up their own stuff and just float out on stage.”

We’re talking in a tucked-away corner of the Dalston Roof Park before her sold out acoustic set under the inflatable roofing of the charitable members club. It’s worlds away from the aforementioned night spots as well as, although not geographically, The Shacklewell Arms, which played host to their London show the previous evening; “It was sort of what we’re used to playing in America really: laid back and kind of grimy. We played with Tegan and Sara at the Troxy too, which was really cool but it was so much of a bigger production than we’re used to, so it was nice to play in our element a little bit.”

She offers a time-and-place appreciation for these Troxy-size shows, but it was the “women loading up their vans, tuning their guitars, drinking cheap beer, being strong and outing their own thing,” that really inspired her musical journey. “That’s what I did for years and years and years so it was sort of like the first time that took me in that direction I think.”

And it’s true, she may have “departed from punk”, but before Waxahatchee, this latest project named after the creek by her parents’ secluded lake house, the bleach-blonde bobbed Crutchfield played in P.S. Eliot, which disbanded in 2011 leaving twin-sister Allison to front guitar-brazen poppers Swearin’ and Katie free to write. “I started recording some songs with no real direction of what would happen with them. I always had, with my other bands and stuff, sort of recorded in the same way, just acoustic guitar and vocals, like very bare bones and put the music together afterward. I made a record that was just me by myself and sat on it for a while and then just sort of decided to release it, that kind of started everything.”

The beginning of last year saw the release of her debut American Weekends, a record which picked up genuinely critical acclaim from the likes of the New York Times and the ever-spot-on NPR. Tracks like the typically honest ‘Be Good’ and the intimate ‘I Think I Love You’ highlighted her song-writing style and an effortless knack for rifling off simple acoustic tracks that have a still have that important presence to hold your attention.

This year will see the release of a sophomore LP in the UK; Cerulean Salt arrived across the pond in March, while we have to wait patiently until 01 July for Wichita to do the honours in this country. How do the two outings compare? “I love both of them. It’s sort of like apples and oranges; they’re like really different form each other. I accomplished exactly what I set out to with both, so it was a success.

There’s sort of a theme about nostalgia and growing out of certain friendships when you’re younger and going into different directions with your life and being unable to relate to each other – it’s kind of sad. I wanted to branch out from just writing about relationships. I wanted to find something that I could channel the same energy but not write about break-ups.”

Energy is a good word: the tracks fly by, with no one cut much longer than three and a half minutes. Some songs, like the abrupt, crunching ‘Misery Over Dispute’ just finish, point made, move on. Despite all these scuzzy inspirations it isn’t that easy to place Waxahatchee; “That’s perfect. That’s exactly what we want. It was funny I did this interview earlier and we talking about shoegaze. I mean it’s such a niche! You’re stuck there forever; it’s nice to be free of that.”

It’s that punk thing that is ever-present, the only definitive way of describing them. “Waxahatchee has done what would constitute a ‘punk tour’ with like No Frills, and we still sort of tour like that, so I don’t feel like I’m completely not that anymore, but the music is a little bit further from that than it used to be.” This may well be the case, but songs like the brilliantly bleak and bassy ‘Brother Bryan’ and ‘Coast To Coast’, with its moments of bare guitar feedback from presumably battered, well-loved FX pedals, are unmistakably drawn from this seminal musical movement.

Cat Power is a name that follows Crutchfield wherever she goes, but she looks somewhat shocked when I mention that I had seen The National appear in the same sentence. “That’s really flattering. Cat Power specifically is a like a huge influence.” As are Rilo Kiley it would appear; “They are. Jenny Lewis Tweeted at me recently and I think she might know about the tattoo!” She points to her sleeve-covered arm, so Lewis’ face is hidden for now. “I don’t know for sure, but that’s a little embarrassing like, ‘Oh yeah. I’m not like a crazy stalker I promise!’ But she is really special.”

Inevitably, Jenny Lewis leads us onto Postal Service and that album; “When I was in high school that record came out and it was all any of my friends listened to. I hold it really close because it was such a beautiful time in my life. Everything was really simple and fun and that album reminds me of when I first started driving a car and blasting it out at night and feeling independent for the first time.” 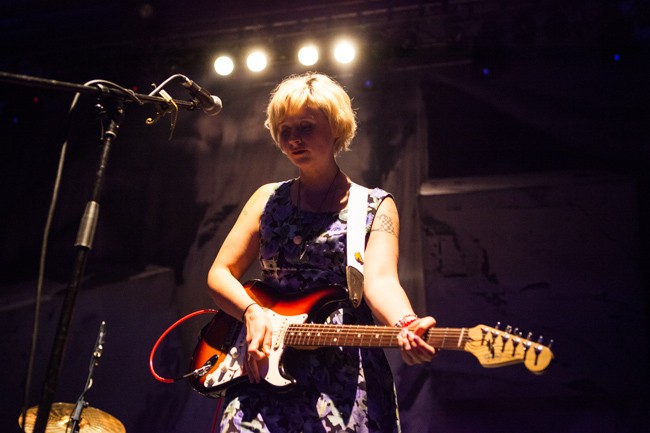 Waxahatchee at the Troxy in London
By Jason Williamson, 12 June 2013

I can’t help thinking of strong, female lead music throughout our conversation; “We’re running shit”, she says proudly, and she’s right. Particularly at the moment it’s hard to ignore the volume of talented, attitude-filled women that are dominating our listening. “It’s just coincidence I guess? I feel like I am the least calculated person! I’ve just had good luck so we’ll see if that continues.” Modest as well then, because you can’t put it down to coincidence and what do they say? You make your own luck. The quality of Cerulean Salt as well as the live show performance comes from experience, obvious talent and thanks to the odes of nostalgia we can all relate to.

My gender observation is dismissed by Katie though, as she rightly remarks, “I feel like hopefully soon it won’t be ‘female music’ it will just be ‘music music’.”

There’s a relaxed, easy air about her, despite our chat taking place at the end of a whole day of intrigued press, and touring in support of the record has got off to a good start; “We’ve just been to the UK so far and we’re loving it, everything’s going great. We’re drinking fruity cocktails and music’s playing on this roof in the middle of the city!”

I say goodbye to Katie and soon the music that she was referring to from the Roof Parks’ PA is replaced by something far more alluring – an acoustic outing for Waxahatchee which proves the quite ideal showcase for this intelligent, honest songwriter within whom you feel the spirit of punk will live on and on.

Cerulean Salt will be released through Wichita Recordings on 01 July.