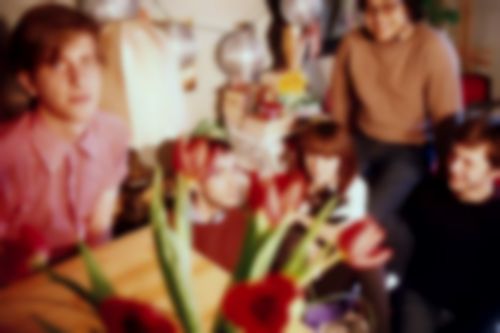 Twin Sister are a bit of a mystery to me. I remember reading about them somewhere and downloading their Color Your Life EP and being completely blown away. However, I’d forgotten where I’d read about them. Some websites placed them in Long Island, some Brooklyn, some Austin. I couldn’t seem to find anything concrete, delving, or clear. There was no fact sheet, just an ever-growing stream of gorgeously dazed and dreamy pop music.

But it wasn’t that simple either. There’s something to their tracks that I still can’t quite place. There’s a kind of low-lying discomfort; lyrics that edge on the broken, unnervingly discordant guitars that almost fall under the overall beauty of the songs. It’s like there’s a veil over them, delicately hiding something disturbing. A fey and beautiful summerhouse with a dark back room that’ll remain forever locked.

Or maybe I’ve just been thinking about The Woman In Black too much recently. Either way, when I got the chance to email some questions over, I nervously accepted.

How is your US tour going? What’s been the best date so far?

Tour has been very good to us, we’ve been having a lot of fun. The best date so far, might be, Boise, Idaho, or, San Fransisco at the Filmore. Can’t make up my mind.

Are you looking forward to your European tour?

Very very much so! First time there for three of us.

Is there any one place you’d really like to play?

The pyramids, inside a pyramid.

Did you all meet in Long Island and then move to Brooklyn? Have I got that right?

We all grew up on Long Island, a few of us moved to Brooklyn once, for a short time, so yes you have that pretty much right.

Do you care at all about being labelled or lumped in as a ‘Brooklyn band’?

Nope, whatever works…We’ve played so many shows there, practiced there for about a year, so as a town it has been nothing but supportive. Great people, so being categorized as a “Brooklyn Band” just reminds me of all of our friends who’ve helped us. Technically though when people ask we say Long Island.

I suppose it must be a pretty great place to live if you’re in a band?

Brooklyn is and isn’t….Rent is high, you have to work really hard. All of Color Your Life was recorded while some of us were living there, which is part of the reason why it took so long. I blame the subway! It’s great because there’s hundreds of venues to play and tons of people just going to shows and supporting bands. Not too much of that on Long Island.

You give a lot of your music away for free. Do you think this helped you gain a lot of attention and fans early on?

You’ve signed with Domino in the UK. Are you fans of the label and any UK artists they release?

Oh of course, we’ve been listening to Four Tet a lot, and Robert Wyatt is definitley a favorite. They are classy.

Can you tell me a bit about the Meet The Frownies track you just recorded, and the Shaking Through series – it sounds like a great idea.

We wrote the song very quickly, recorded it even quicker, about 12 hours! A record for us. I really like Andrea’s lyrics a lot on that one. Shaking Through is awesome! Such an impressive thing they have going, we are very proud and happy to have been a part of it.

There’s a lot of twin bands about at the moment. You guys, Twin Shadow, Twin Atlantic, Summer Twins… Is it because everyone bought Twin Peaks box sets?

Are you Twin Peaks fans?

We are, it was a great show.

Your music is a bit like Twin Peaks really, in that you’re kind of spacey and beautiful, but kind of unsettling too. And I read somewhere something about you eating people? This isn’t really a question, but anything you want to add here is great…

This might be my favourite question of all time.

There’s not much on your MySpace, but one thing you do say is your influences are “The art our friends make and the cats of our lives.” Do you think Best Coast has kind of hijacked the cat wagon for indie bands now?

I don’t know. Cat love is beyond that stuff, and whoever experiences true cat love is very lucky and I’m happy for them.

Who did the artwork for your releases? I love the cover of Color Your Life, how it looks really normal at a first glance and then you realise everything’s not quite right.

Thank you….Andrea designed that whole dollhouse, she handmade just about everything you see in the photos. Some of our friends, Dan Devine and George Kalivas helped out with the pictures and layout and font.

Whose cat is on the cover of (new single) ‘All Around And Away We Go’?

George’s, our friend who took the pictures. His name is Sakura.

I love the Teen Daze remix of that track. If you could get anyone to remix one of your songs, who would you choose?

Is there anything I’ve totally missed here that people should know about you?

Not really, we can’t wait to come to the UK next month!

I’m not sure I’m anymore enlightened after reading the answers, but I kind of like that. It’s the mystery that makes me want to keep getting closer.