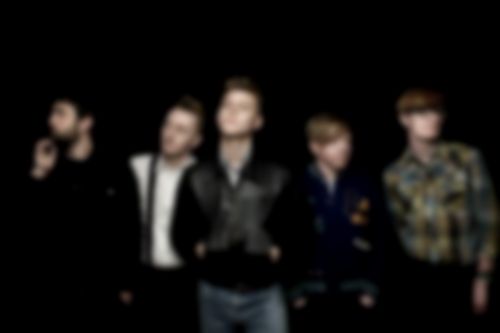 You know those songs that get stuck in your head? The ones that have that almost too perfect refrain, that have the kind of chorus that sure, at first seems so very simple, but really possesses more brainwashing power than every cult, clan and commercial multiplied together? Well, meet the guys who write them.

Frankie & The Heartstrings are a Sunderland quintet. Their press shots make them look like dashing romantics and their music makes them sound like new pop heroes from the past, ready to take the future in a wave of humming fretboards and cheeky grins. They’re a favourite at Radio 1, they’ve toured with Florence and the Machine and their name can be found on many a festival poster this summer. Yet, they’ve only been together just over a year.

So Frankie, how did it all begin?
The band got together when I was working in a bar in Sunderland town centre and Michael the guitarist and Dave the drummer would come in on a Sunday night and talk about music they liked, films they liked, and I would test cocktails out on them. Sometimes I would get a pineapple and scoop all the middle out and make a really exotic cocktail so it looked like something Del Boy would have.

There was quite a stagnant scene at the time so we were like ‘Let’s go upstairs’ coz there was a spare room upstairs and we’d try and jam something out. At the time I played bass, Dave was on guitar and sang and Michael played guitar as well so essentially we weren’t a band coz we didn’t have a drummer. So we got this guy in called Graham who was an alcoholic and instead of coming to practice with us upstairs would go downstairs and drink.

To cut a long story short, Pete joined the band after seeing us play as a four piece. He initially came in to record us. He saw us a play a couple of times and said he’d record us and then the next gig it was, “Ah Pete – you know that bit you were playing on the recording? Could you come and play it live?” And he just kind of joined the band from there. So we’ve been going for just over a year now and it all started by making cocktails.

If I ordered a Frankie & Heartstrings cocktail in Hard Rock Café in ten years time, what would I get?
Well, first of all I’d do the classic carved out pineapple; that was good. It’s got to be tropical in that case. Maybe put some Malibu in and some Lilt. It’s really just Malibu and Lilt.

Paul Mullen told me you used to be his pub landlord?
Paul’s from the same town as me and I worked at a local pub and then I went on to be the landlord of this pub in Sunderland called The White Room and that’s where we all met. It’s kind of like the left bank capital of Sunderland. Pseudo intellectuals can hang out there and have a Malibu and Lilt.

Paul would come in when he was in town and tell us about his life as a rockstar and I’d think ‘Oh, that’s pretty cool’ and now look at me! Bloody Hell!

So when you started the band, what was the main target? What did you want to achieve, aside from drinking cocktails?
It was to do interesting things. We wanted to do something interesting and coming from Sunderland we’re not what you’d normally expect to hear in terms of our music, which made us stand out.

And to get revenge on people who’d pissed us off in the past. Like Michael’s got really ginger hair but and he used to get picked on at school so his biggest passion in life is going on Facebook and putting like ‘Oh yeah, we just supported Florence and the Machine at Brixton Academy’. That’s the reason why Michael’s in a band I guess. Oh and we all had bad experiences with girlfriends and stuff so that was also another good reason to start a band.

My ex-girlfriend cheated on me with someone else and just at the time I was starting the band. I know for a fact she subscribes to Grazia and a couple of months ago there was a big picture of my face on the inside back cover so I can imagine her getting that through her door and going “Oh no, shit.”

How does the songwriting work? Does Pete (formerly Johnny X of Kenickie) write the songs or do you write them?
Pete takes a backseat when it comes to song writing and his focus at the minute is putting songs together in production coz that’s something he’s really passionate about. Michael, our guitarist, writes the majority of the songs and then Dave would put some drums on it. Dennis is probably the best guitarist in the band although he’s on bass so he puts lead bass on the track. Pete puts his bit on and structures the narrative of the song into a pop song and I put some lyrics on the top and that’s kind of what happens.

So, whose idea was the Frankie bit in the name?
When we initially started a band we toyed with a couple of band names. One was popsex which is now our label, the database we have. If you go on popsexltd.com it’s kind of an archive of our inspirations and things we’ve achieved so far. We’ve stolen the Factory idea of cataloguing things. We toyed with this idea of being called The New Groomers for a little while but then we thought nah, it sounded a bit peado.

What’s the whole ‘Lads on Tour’ thing about? You’re forever tweeting it.
It’s an ironic take on lads. There’s a good thing called truelads.com – it’s like a blog and it’s really interesting. I’ll describe what my idea of a lad is; guy goes out Saturday night, shirt and trousers, drinks blue WKD, tells his mates he shagged a lass, and then goes out on a Sunday afternoon, has a pint and a packet of crisps and goes back to work 9-5 on Monday. The Lads on Tour thing is a total pisstake of that. We’d tweet something like ‘Yeh, we just had a pint of beer with our dinners. #ladsontour’ or we’d say ‘Met a girl tonight. Talked to her. #ladsontour’. It’s a complete pisstake of that really.

Speaking of twitter, do you mind having drunken photos of yourself re-tweeted by Wichita?
Wichita is almost like, part of the family. It’s run by 4 or 5 people essentially and we want them to be part of all occasions because they’re in our lives now and we couldn’t be happier.

Before the band, the only time I’d been to London was to see Buckingham Palace with my mam. One time we came down and we were with Ben from our label and we went past Westminster and he was like “Guys – there’s Big Ben”. Like, fucking thanks for pointing that out by the way. I know I’m from Sunderland, but…

There’s as many American Apparels in London as there are Greggs in Sunderland.

Frankie would also like us to add: What happens on tour stays on tour. Lads for life. And if there’s anyone from American Apparel reading – give him free clothes and he will wear them on stage at Glastonbury. Thanks.