When the pandemic and its subsequent lockdowns caused ruptures in music scenes across the world back in March 2020, its impacts were sudden and deep. From venue closures to delayed album releases, the shockwaves were felt throughout the music ecosystem.

For Squid, who were soon to begin working on their debut album, Bright Green Field, it presented particular implications for a band at an important juncture in their careers.

Having already won praise with singles “Houseplants” and “The Dial”, it was on 2019’s Town Centre EP where the high-octane five-piece really started to find their feet. Produced by Dan Carey of Speedy Wunderground fame (black midi, Fontaines DC), it went beyond the jerking, Gang of Four-esque intensity of their previous work and started to investigate tenser, more explorative manners of performing. “The Cleaner”, Town Centre’s probing centrepiece, in particular, embodied the progress the band were making, and remains one of their most realised tracks. But then, just as they were preparing to work on their debut full-length, the pandemic struck, bringing much of what they had planned to a drastic halt. Instead of touring and refining new music in front of crowds, they were forced to withdraw, and learn to write and record in different ways.

“It’s really strange because there are songs on the album that we’ve still never played live and we still have no idea how it would feel playing or how crowds would react to it, and that’s usually such a key part of how we develop a track and how we use it in the studio,” Arthur Leadbetter (keyboards/strings) tells me over Zoom. “Taking that away has removed the live element from the development of our music, and it made us have to think about recording in a whole new way. I think it’s changed it but not in a negative way, we’ve just had to put ourselves into that mindset.”

“I’m pretty confident that the songs are good, and that’s one win,” singer/drummer Ollie Judge is keen to qualify. “But I just think people are going to be so excited to be watching live music that even if we butcher them people will be happy to be there. It’s going to be really interesting because the songs that we haven’t played live have got quite a different feel. It’s a very high-intensity set that we used to play so it’s going to be nice building it, with more highs and lows, and the new tracks on the album are going to give a more dynamic range to playing sets." 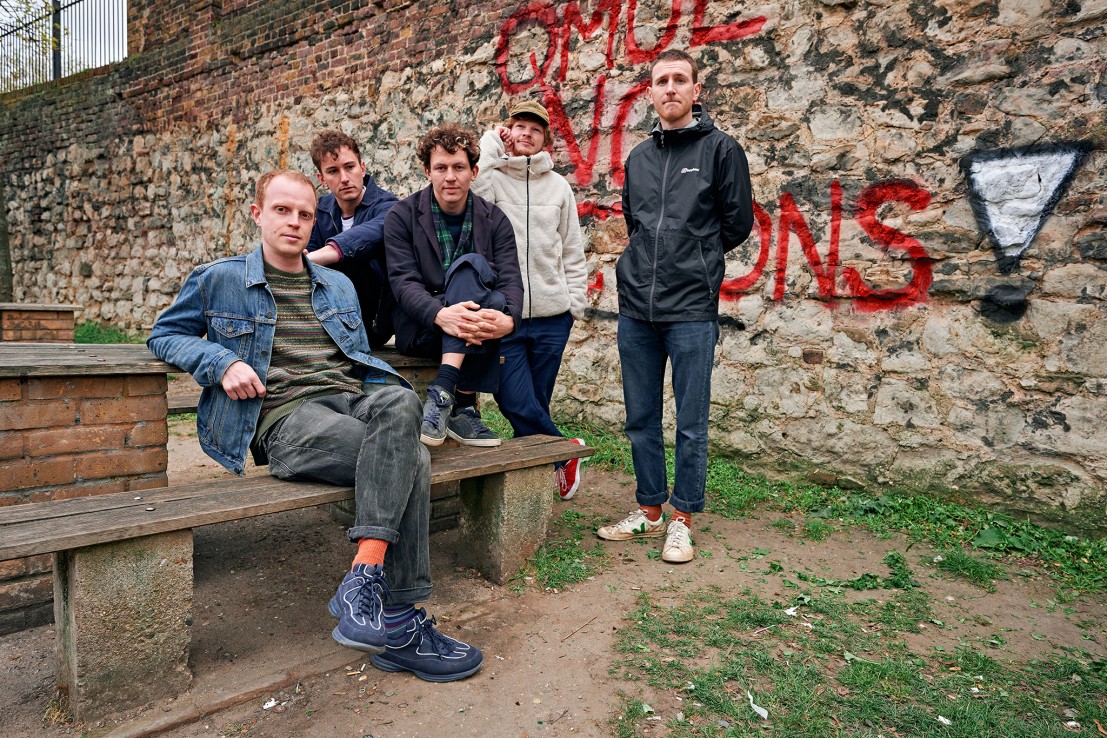 Introduced to the world via the release of seven-minute single “Narrator” back in January, Bright Green Field is again in every sense a different type of release for Squid. Building upon their established base of eccentric rhythms and discordant instrumentals, it expresses much darker sentiments, and a more ambitious sense of scope. Unsurprising given the violent change of circumstances, and it being their debut, it is both a collection of and an extension on their work to date.

“I think it was definitely more considered,” says Judge. “To the point where it was making me go a bit mad because I thought that every track had to thematically link into one another, and each sentence had this insane amount of loaded meaning. I reached a point where a large majority of it is influenced by sci-fi books and films, but some of it isn’t, and it doesn’t all have to be a concept. I was definitely looking more into books and films for inspiration, whereas on the older stuff I was living in London at the time and it was about dead-end jobs and stuff like that – which I don’t have any more because I do this.”

While interactions between characters previously proved a focal point for Squid’s music, on Bright Green Field the band is instead concerned with what Judge has termed an “imaginary cityscape”. Influenced by the writings of authors such as Douglas Couplan, Mark Fisher and Merlin Coverely, which collectively made Judge realise “we’ve been living in a dystopian and futurist landscape for a long time”, the record is denser than anything they’ve produced so far. From the normalisation of, and widespread indifference to, the war-related violence shown on TV (“Global Groove”) to the admittance of a loved one to the Phoenix Ward of St Ann's – an eating disorder specialist service – (“Documentary Filmmaker”), Bright Green Field dispels notions of bucolic serenity conjured by its title with songs exploring our unsettling present.

Such influences draw parallels with the abstract work of contemporaries such as Lice and Black Country, New Road, with the former in particular exploring alternative storytelling methods to illustrate ills affecting modern life. Does this indicate a growing interest from acts in finding new ways to approach writing music? “I think there is”, says Judge. “I don’t really know why, I think people are just so fed up with what's actually going on around us, that looking into something more fantastical and less real is a nice kind of escape from that. But also you don’t want to just write a love song. It’s the same with experimental music coming out at the moment, people aren’t conforming with lyrics as much either.”

For a band that began as a jazz outfit, playing long ambient music at Brighton venue The Verdict, the evolution of Squid’s sound over their tender years has been stark. While their precocious talents and famed live performances are perhaps owed to their origins, their development into an act capable of flitting between indie, post-punk, experimental and almost anything they turn their hands to has occurred at rapid pace. It’s a hunger for continual growth that Leadbetter points to as feeding the ongoing change, and what has led to Bright Green Field becoming a further evolution of their style.

“[It’s different] only in the same way that most things that we write feel different, because otherwise we’d bin it. You always want to be doing something that excites you in different ways. One of the best things about that track (“Narrator”) is whenever we play it live, it breathes a whole life of its own. We actually did get the opportunity to play that track live quite a few times, and it’s an absolute joy to play to an audience. When we do get the chance to play in front of crowds it’s going to be a magical moment, and I think everyone is going to slip straight back into it. I don’t think there’ll be any nervousness about music, about being there, about anything new”.

Recorded with Dan Carey in Bristol, Bright Green Field’s esoteric sound owes much to the man who has quickly become the band’s go-to. Known for his gruelling and wildly eccentric recording techniques (“Dan likes to put smoke machines and lasers on when we’re recording, which does create a very singular atmosphere, which is sometimes good for us and sometimes bad”), his approach, while clearly effective, seems totally unsuitable for the faint-hearted. Thankfully for Squid, this time around it seems like their loyalty to Carey was rewarded in the form of a welcome upgrade.

“We’ve graduated from the Speedy Wunderground rules,” beams Judge. “We got the exclusive gold member package, which meant that we could get pizza from across the road and eat al fresco along the street. Where Dan wouldn’t let you have lunch before, you now have an Italian banquet with limoncello and his signature Dan Carey pizza, which the place across the road does because it’s run by a few Italian rappers and he recorded one of their tracks once.” 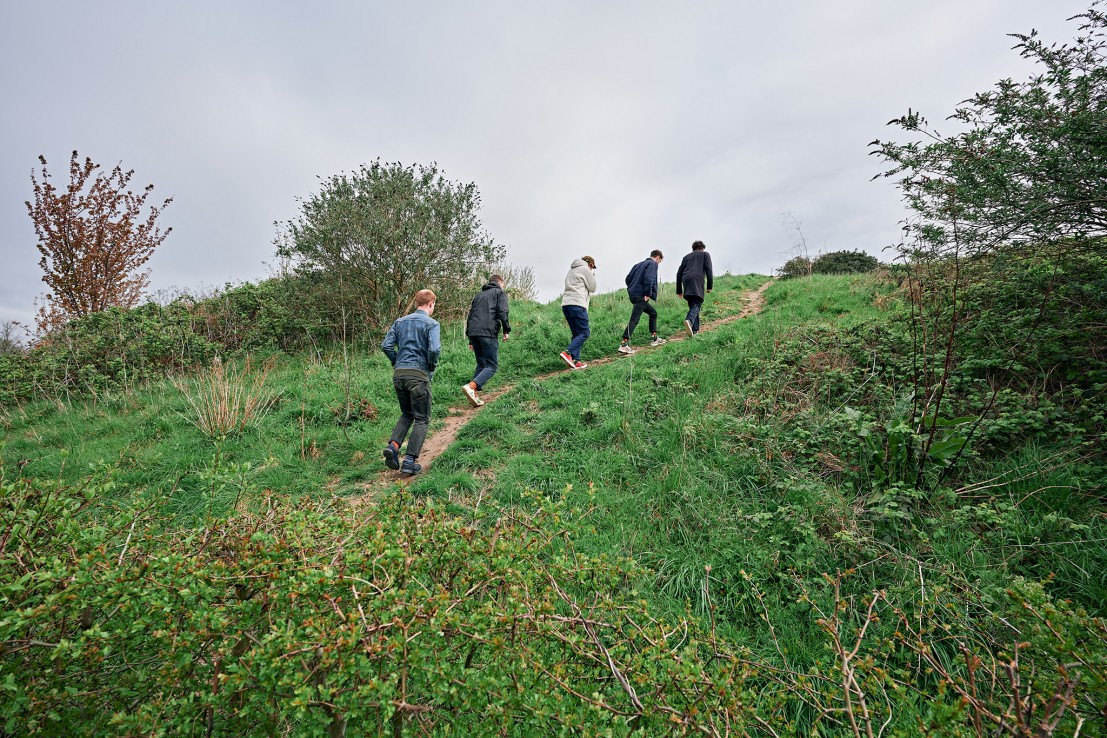 Beyond Carey, Bright Green Field is touched by the influence of another musical character prominent within the wider Squid ecosystem: Leadbetter’s dad. While he credits his dad for introducing him to instruments like the baroque triangle, it’s the mighty rackett; a Renaissance-era bassoon, that plays a particular role on the album. “The rackett came in at a point in the album where I wanted to create a mega drone that had the expanded depth of an acoustic instrument but it was controlled via a synth, so I remembered this instrument my dad showed me as a kind that was like a bass bassoon but in the shape of a shoebox, and it just sounds amazing.”

Despite being placed within an imaginary context, the impacts of lockdowns and greater isolation were impossible to avoid during the making of Bright Green Field. One way in which this manifested during recording was in Leadbetter reaching out to friends asking them to send him voice notes, with his intention to promote the sense that, despite physical distancing, they were really close together. “I was talking to old friends more than ever before," he says.

Judge similarly recognises how the pandemic, in ways both implicit and explicit, can be felt across the record. “Being in lockdown for a few months was the longest we hadn’t seen each other, so when we did reconvene to finish writing the album we wrote the song “Peel St” in about a week, which is quite a furious and intense track. We hadn’t seen each other in about three months, and I hadn’t played drums in about three months, and suddenly we were back and writing music again. That song paints quite the picture of how much we missed playing music together”.

At the time of writing, prospects for the UK are slowly starting to look more encouraging. Despite long being a prime example of how not to deal with a pandemic, an impressive vaccination effort has seen a huge drop in cases, and for the first time, a light is almost visible at the end of the tunnel. Is there slight trepidation though for Squid when looking ahead and planning next steps? “Got to book things,” Leadbetter responds defiantly. “Got to get some jobs in the calendar. But apart from the odd festival booking coming in for later, we’ve arranged a socially distanced tour. That’s going to be amazing, and it’s going to get us back into the swing of touring again and playing gigs one after the other. And it’s not going to be an album tour, that’s going to come later. There won’t be that many tickets, like 30 people sometimes, and we’re going to go to some interesting places”.

For those who do catch Squid on tour and hear many of the tracks on Bright Green Field live for the first time, the experience is likely to be one of profound release. Not just because of the exhilarating return of live music, but also the quality of the record itself. Rather than allow their debut to be defined, or consumed, by the pandemic, Squid have instead pivoted to produce an album in keeping with their restless desire for progress.

And as they slowly come out the other side, the band not only emerge with the ability to commit more to what was previously a “hobby” (“I have got a proper job, this is a proper job. I’m up at eight in the morning for God’s sake”, laughs Judge), but also with a debut they can be phenomenally proud of. Looking forward, one can only hope that the UK’s easing of lockdowns and Bright Green Field’s release plans continue to pick up pace, so Bright Green Fields can finally get the facetime it deserves: in front of crowds desperate to reconnect.

Bright Green Field is out 7 May via Warp Records