Saweetie knows what she wants now, and she knows where she wants to be in ten years. She’s known it since she was a teenager.

Born Diamonte Harper, the emcee – whose aggressive, girls-to-the-front rap has recently blown up in the form of club-smash single “My Type” – grew up in both the San Francisco Bay Area and Sacramento, and is finally getting to where she imagined herself all those years ago.

When we meet, Saweetie has been in London for three weeks, playing a solid run of festivals and shows. All that hustling means she hasn’t had time to get into the studio or focus on herself much.

“Yeah, my schedule’s booked throughout the year.,” she sighs. “I’ve had two days off. Girl, I gotta go! In this day and age, our songs become bigger faster than the actual artist. So we don’t really have time to do artist development, because the song’s so hot that we’re being booked for festivals, shows, like we’re kinda learning as we go. It’s a little frustrating because I love artist development, but it’s just a new day and age for how things are.” 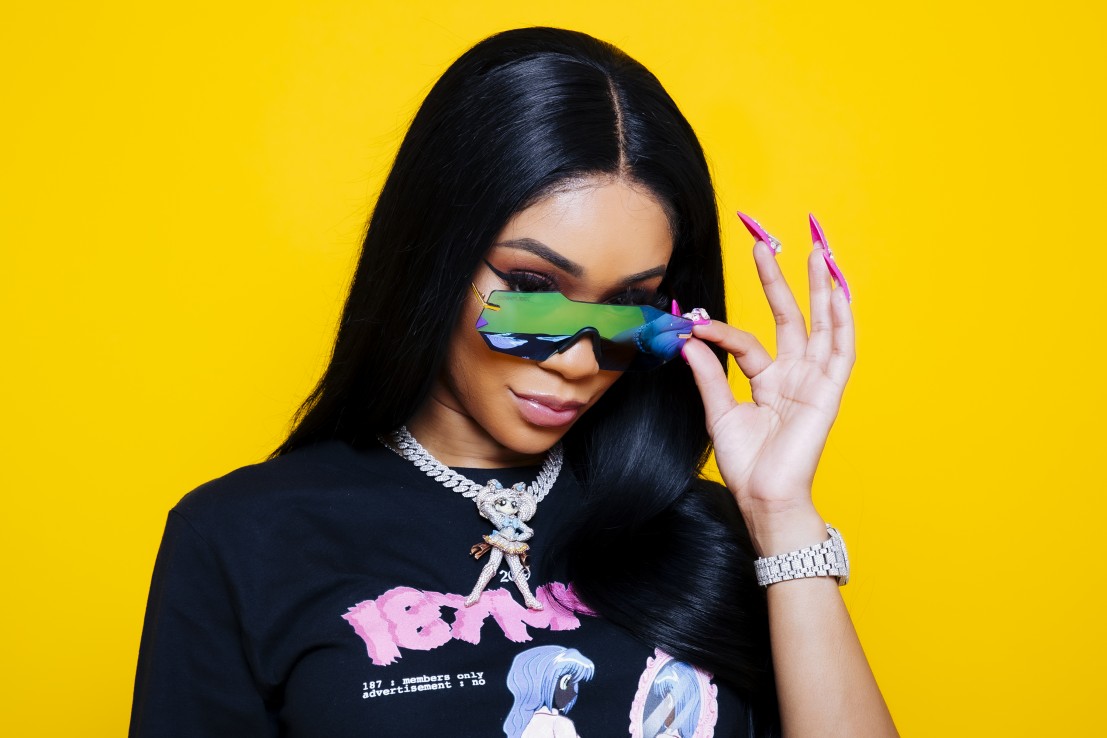 Saweetie grew up with a huge family in the Bay Area, and was raised by various different members while her parents went out to work. “I grew up in the Bay Area but I finished high school in Sacramento, which is why I claim both areas. I feel like both of them shaped me into the woman I am today. Growing up, it was a lot of fun because I have a really big family. I was an only child for like eleven years, so my brothers and sisters were like my cousins. And I’m half Asian half Black, so there was a big cultural difference. It was difficult but it just made me realise that no two groups are the same.”

Saweetie describes her parents as “hustlers”, who had her when they were still in their teens. “My mom was 17 when she had me, so my parents were always working, and my grandma took care of me. My mom and my dad both come from big families, too – nine on my dad’s side and seven on my mom’s side. We didn’t grow up rich, or at least I know I didn’t, which is why it feels good to make all this money, because I’ve never been able to just buy whatever I wanted to.” Saweetie admits to being lavished by her extended family because of her unique place amongst them - maybe another reason she’s developed a notable taste for shiny things. “Because the family was so big, and because I’m like the first girl on my mom’s side and the first grandchild on my dad’s side, I was spoiled because there were so many aunties and uncles!” 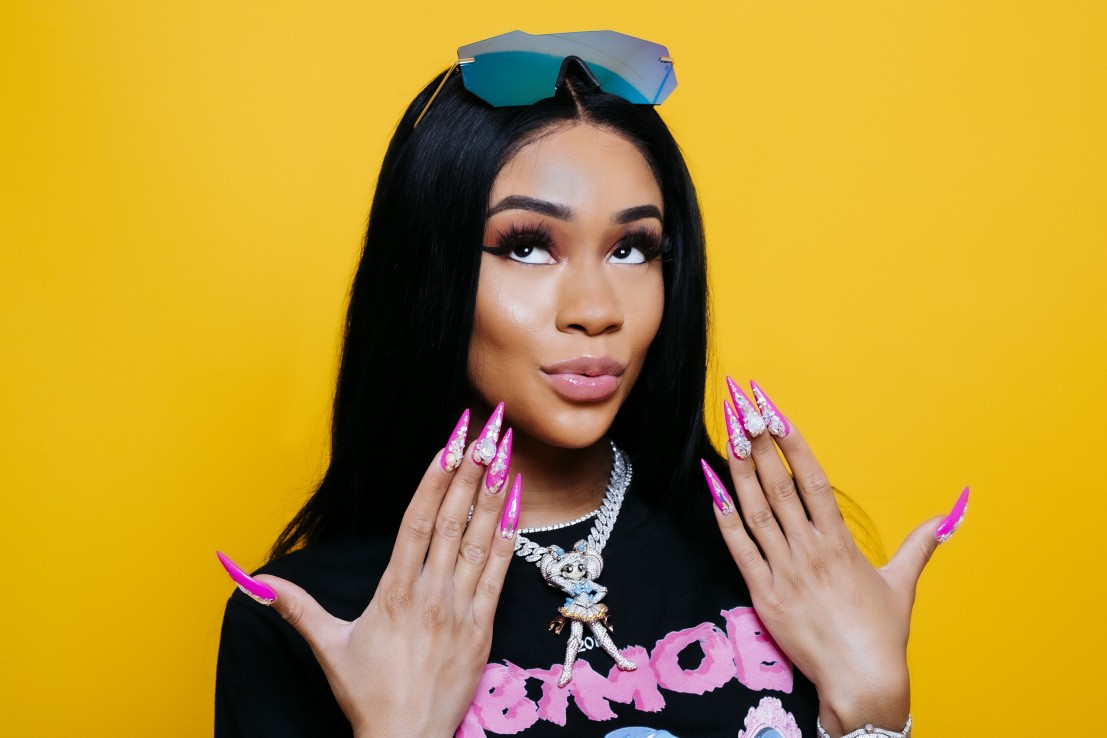 Unexpectedly, and despite the confidence she radiates in her songs, Saweetie is pretty reserved in person, and it takes a while to get her to open up. When she does, the motives behind her whole career become clearer. She’s so inspired by her family and doesn’t take anything for granted. She wants to look after them the way they looked after her, and stays humble because of it, no matter how many business ventures or hit songs she racks up.

“I feel like my family was working class, but because we all had ambition, everybody kinda made a name for themselves,” she says. “My uncle coaches for a football team, my cousin is a producer, my auntie works for another football team, so we all work hard to get what we want. I really just wanna become a big superstar that has all these brand deals and all these hit records so I can make all this money to take care of my family.”

After finishing high school, Saweetie attended college at San Diego State University, before transferring to the University of Southern California – never in one place for too long. She studied communications and business, meaning she knows exactly what she’s doing when she’s making money moves.

“People always ask me why I majored in communications, but I think it’s used everywhere and its made me a business woman. I’m able to tap in and understand what’s going on with my deals, my contracts. At first my major was journalism, but I didn’t like that we had to read so much so I switched. I thought it was just gonna be like me in front of a camera all the time, and it wasn’t that!” she laughs. 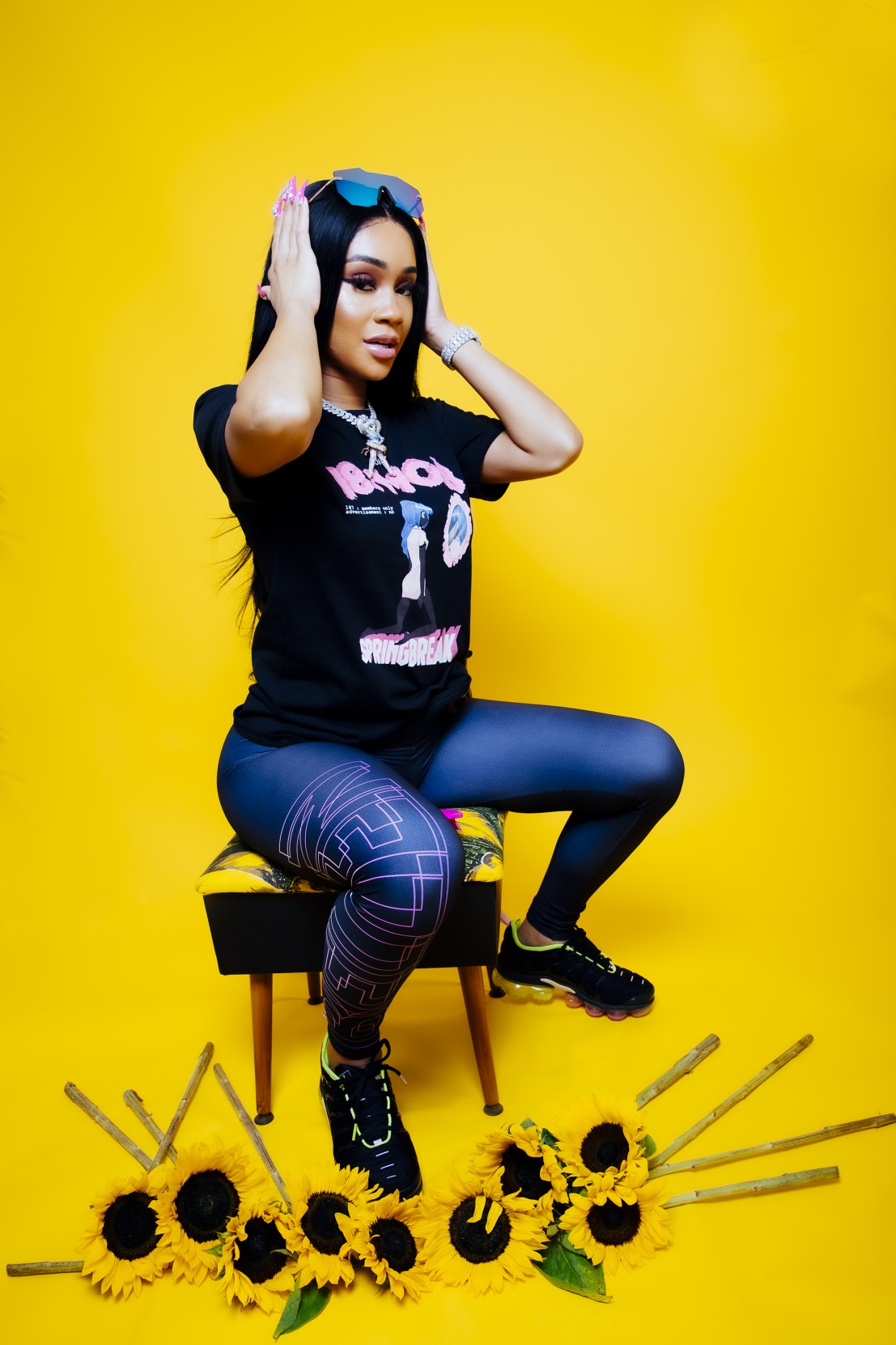 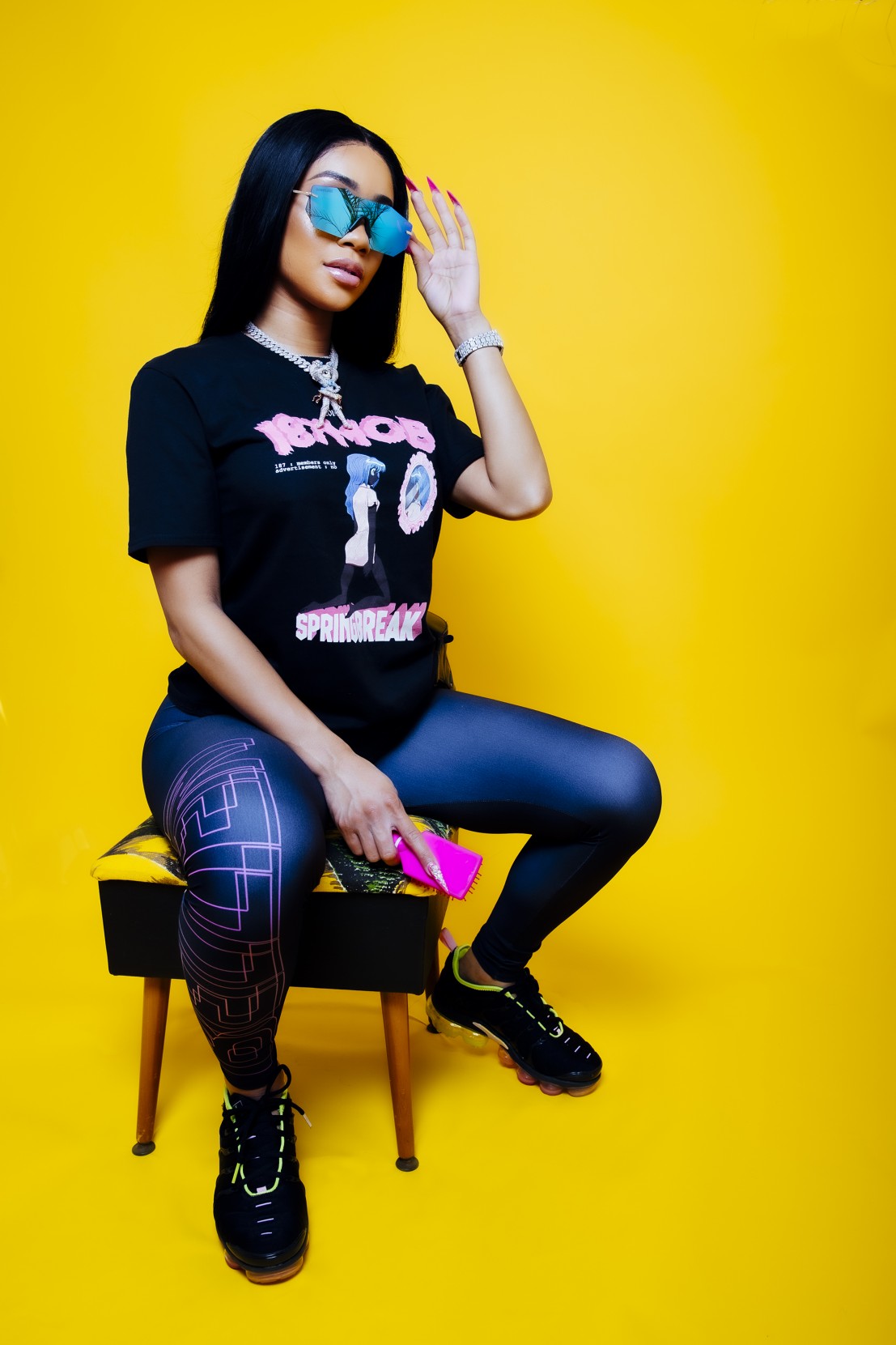 After university, she tried getting jobs in hospitals because it paid well, but her heart wasn’t in it. “I was just really broke after college. I got like three job offers, but it just didn’t feel right. So I was just like, you know what, I’m gonna give 100% to music, and if it don’t work out I’m gonna go back to the regular job... but thank God it ended up working out.”

Saweetie’s passion for music came after writing poetry at a young age. “Once I realised that music was basically poetry, I wanted to do that, and it was the first time I felt like I had a passion for something,” she beams. “'Cause at first I wanted to do hair, but then I realised ... I like doing my own hair but other people’s hair? Girl no. So that quickly died, and music was the only thing I’d ever been passionate about.” In 2016, she started posting videos of herself rapping to her Instagram page, including the clip of her rapping over “My Neck, My Back” by Khia, which would eventually become her breakout single “ICY GRL”. “I’ve been writing and stuff since I was like 14, but “ICY GRL” was probably my, like, fifth time ever in the studio, and I recorded it because my manager told me to.I didn’t think it was gonna do anything. I was like, ‘this is somebody else’s beat, what’s gonna happen?’ And it ended up being really good.”

Starting on social media wasn’t without its pitfalls though. Especially being a woman, critics descended on her fast, assuming she was just another Instagram star. She’s having none of it, and is working harder to prove she’s here to stay.

“I mean, unfortunately, people have used the fact that people think I’m cute against me, so it’s like ‘oh another pretty girl rapping’, it's just like… I been rapping,” she laments . “And I can’t help that people think I’m cute. Either way, women go through too much shit, it’s this or that and it’s whatever, and we making a name for ourselves and eventually all this dumb shit that comes with it will disappear.”

Luckily, the new wave of female rappers came just in time for Saweetie to catch it. “ICY GRL” blew up as Cardi B was taking over, Stefflon Don was having a major moment, and Nicki Minaj was making her comeback. The rapper’s latest release, the Icy EP, dropped just before the official start of #HotGirlSummer, a social phenomenon started by Megan Thee Stallion used, in part, to highlight the incredible amount of female rap talent exploding out of 2019. Megan, along with Rico Nasty and Tierra Whack, made the XXL Freshman list – a notable feat considering the previous dearth of women emcees.

“Finally three girls! I’d like to see an all-women freshman class one day,” says Saweetie. “I think it’s amazing, I feel like we’re in a golden era. And it’s just dope because – oh my god I was shooting a YouTube series yesterday and it was with four girls and it’s coming out soon, they’re really dope, and the whole time they were only playing female rap, and it was so refreshing to hear that instead of a whole bunch of like male songs...” 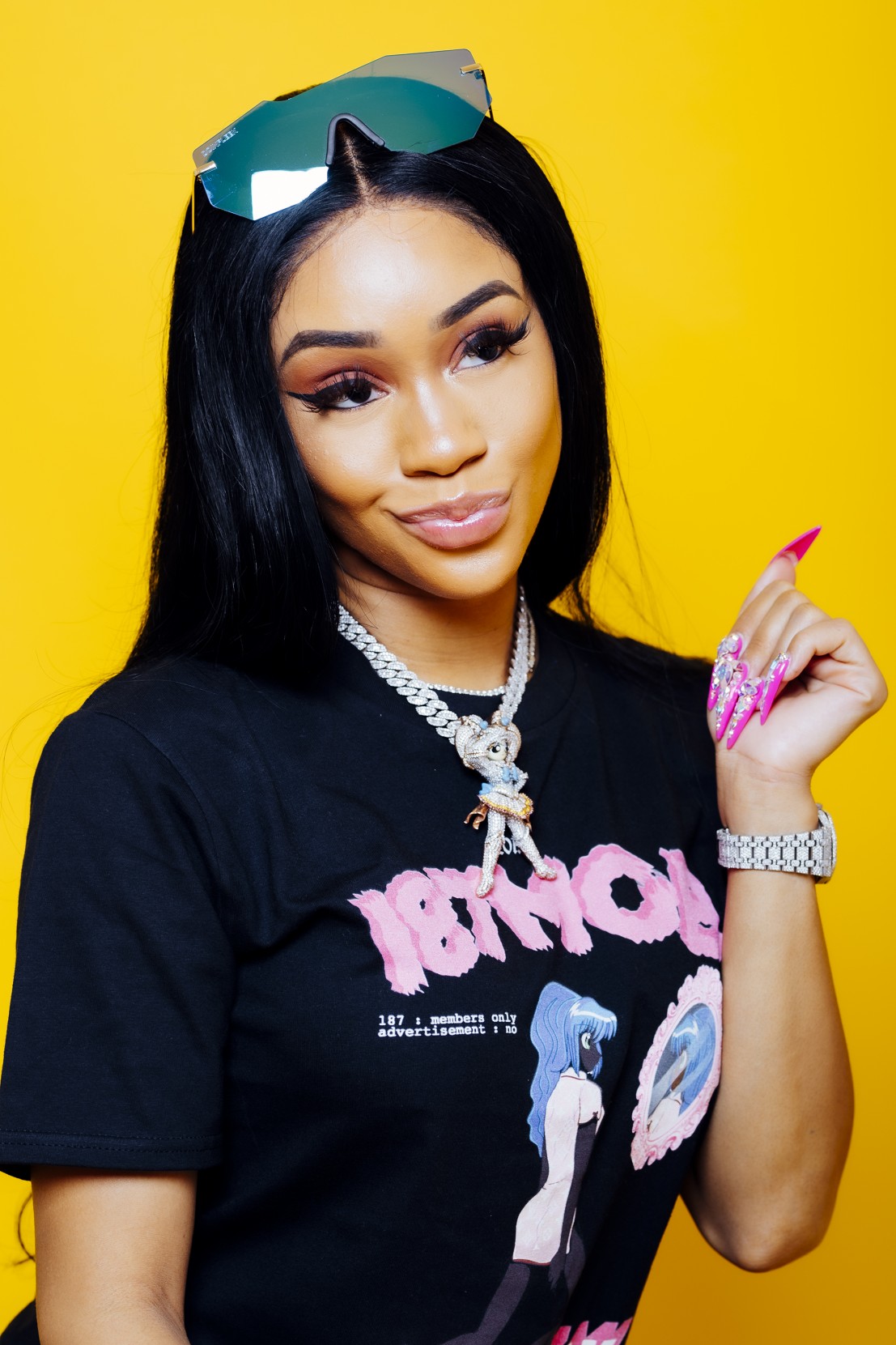 Saweetie recognises that the industry fight isn’t over though, even if it feels like female rappers are finally everywhere.“I feel like there’s still a lot of sexism,” she admits. “I feel like we’re not included as much, but the dope thing about today is we’re able to create our own fanbases, and I think that is just super fly, that we’re all doing our own thing, getting our own money, and putting ourselves on with no co-signs.”

Talking of co-signs, she’s not super into collabs. The ones on Icy with her other half, Quavo came around naturally. “They kinda just happened organically because I’m always around him, of course it happened. I’m so stingy with my songs. [The song I've done with Kehlani] ...that just had to happen, because we’re both from the Bay, and that’s a dope feature, but “Tip Toes” [with Quavo] happened spontaneously. I missed my flight, so we went to the studio and recorded, and “Emotional”, he asked me to get on the song.”

On her relationship, Saweetie definitely feels the pressure of being with one of the world’s biggest artists right now, but she wants to prove she’s much more than the person she’s dating. “I feel like I work so hard to build my brand, and people knew who I was before [we were together]. “ICY GRL” had gone gold and I was already touring and making a name for myself, so I’m kinda just living my life, I’m my own entity, I’m my own brand, I’m basically a young mogul in the making.” She’s not wrong: despite only just starting out, Saweetie runs her own label as part of Warner, has just launched her own lipgloss and jewellery line, has a successful merchandise line and a devoted fanbase of icy girls that make it all possible for her. 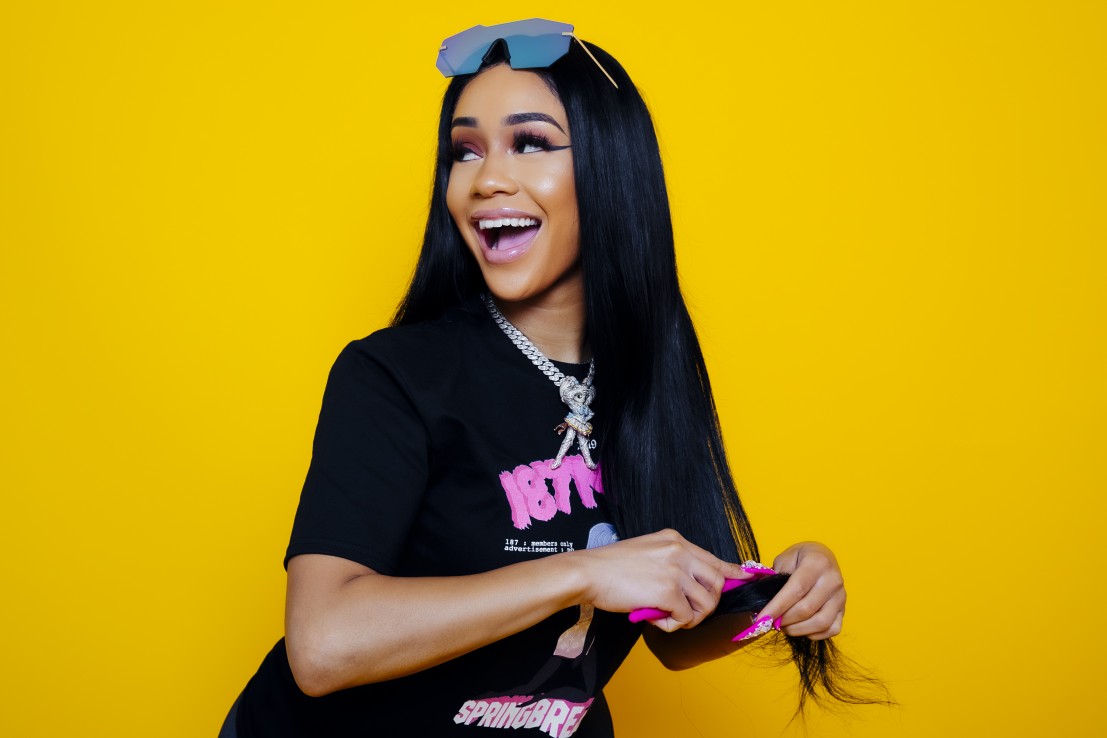 When she’s finished with her supporting slots for Cardi B and Doja Cat, Saweetie’s about to take some time out to go into the studio to start writing and recording her debut album. It’ll be the first time she’s had studio time since it all took off for her.

“Here’s the thing – what I dislike is that I’ve never been able to just lock in and record, so I kinda just record a bunch and then pick my favourite songs. Before my album, I’m going to lock in for a week or two and just record specifically for my album. I’d love to get in the studio over here [in the UK]. Catching a vibe overseas is different, but I haven’t had time to because my schedule is so hectic.”

While there’s not much she can tell us about the new LP yet, she’s got a vivid idea of where she wants to be in the coming years, and those dreams aren’t small. Thank God her worth ethic is unmatched – and her self-belief is unwavering.

The ICY EP is out now.