After talking to Robyn Hitchcock for a few minutes, you find yourself in a state of mind where nothing is quite as it seems; an engaging conversationalist, even while jetleagged, our discussion is less an interview than a much-needed catch-up with old Uncle Robyn.

In the wake of his dexterous speeches about getting older and travelling the world for a living, asking questions about the making of his eighteenth album seems insignificant. So, when Hitchcock asks me what I do for a living halfway into our hour-long chat, I all but give up on my planned route around his mind, before admitting that by day, I’m a typical office admin bod.

“Nothing happens without admin,” Hitchcock replies, in a strangely reassuring tone. “85% of my life is spent doing admin, and every so often I sneak off and pick up a guitar. I don’t know if that’s true for Tom Petty or Adele or Laura Marling, but if you get disconnected from admin, you get disconnected from reality. You go around thinking admin does itself, and then in a way, you start to become a floating head. You’re not necessarily connected to the ground. I think admin is what keeps me earthed.”

Earthed, in the context of Robyn Hitchcock, is a somewhat loose term. A unique character in popular music – he’s a perennial outsider, who takes his cues from “people very much on the fringes of the music industry – Captain Beefheart, Syd Barrett, the Incredible String Band.” Yet, he’s skipped from major label to major label for decades with little commercial success, but a whole lot of cult appeal. This interview is his last of a long afternoon’s talking – “There’s always a danger of repeating yourself . You’re liable to, but it’s not very satisfying. Just like a form of interrogation where you’re giving the same answer until they withhold your porridge” – yet, while he frequently apologises for being in a sluggish state, you’d struggle to notice.

Indeed, the interview takes place the day after his return from America, the focal point of his trip being a series of benefit shows organised by Peter Buck for the Palapa Society, an educational establishment in Mexico. Robyn elaborates: “There’s a lovely bit where we all go round to the school and there’s seven grizzled indie rockers in a circle sitting there playing this music at point blank range to a bunch of seven year old Mexican kids who are sitting on the ground.”

More pressingly, March sees the release of his first album in three years, Love from London, and a sixtieth birthday celebration show takes place at London’s Village Underground later this month, where he’ll perform material from every one of his studio albums – “an accelerated 35 years in two and a half hours.” And, apparently, picking from his 250-odd-song catalogue hasn’t been that tricky.

“It’s a question of rehearsing everybody, because I have different combinations of people on different songs. I wouldn’t normally impose this on people, but even with encores, we’re just about going to get it in a two and a quarter hours. I don’t like shows that are that long, but we’ll give people time to stop to breathe, and it’ll just be an interesting experiment. A time lapse, really.” He adds that the decision to play a show like this was inspired in part by shows performing albums in full, namely 1984’s I Often Dream of Trains album, and 1991’s Eye.

“I mean, if you’re Bob Dylan you can just turn up with whatever selection of songs you choose to play, and the audience will swallow that undiluted both good or ill. But I think generally if you look at the number of shows now where people are told what’s on the menu, either tribute bands, or people doing tributes to themselves, I think that way, people can at least they know they were different shows.”

Robyn offers a similar outlook on his back catalogue: “Once you’ve made a lot of records, you do need to be able to tell them apart. So whatever I do next, I need to make it sound different from at least the previous few.” In the case of Love from London, the more organic sounds of his Venus 3 records like Propellor Time and Olé! Tarantula has been replaced by what he calls a “subliminal tidiness,” courtesy of producer Paul Noble, who is more used to working with the likes of Gabrielle and Sugababes. According to Robyn, Noble’s idea for the album was to “give the record company something to work with… everything was click-tracked, all the drums are artificial.”

And, surprisingly, the gloss works wonders. Tracks like the dreamy ‘Strawberries Dress’, with its cooed female backing vocals flown straight in from Leonard Cohen’s best work, or the countryish stomp of ‘Be Still’ are remarkably well-suited to the high-production treatment, and just as well suited to the album’s working title, File Under Pop. “I think was more the ironic intention, but I didn’t really want to name it that. It was a slightly brutal title – not very romantic, y’know? It sort of sounds like something a Rough Trade band would have done in about 1979.”

So why Love from London? “In this business, you spend a lot of time being away from home, so twice a year I pass through every major city in Europe and America. But I’m actually from London, and I thought it would be good to send out love from London, rather than malice or some form of ill will.”

“I was born in Paddington sixty years ago,” he continues, “and I’ve lived here most of my adult life, without really thinking about it. The clock has ticked on and the calendar has shed its leaves and we all got older and slower and fatter and greyer and wax drips down our exteriors, and probably our insides too. If you looked at a time lapse film of us, we would appear to be giving birth to ourselves, and then kind of mulching down.” 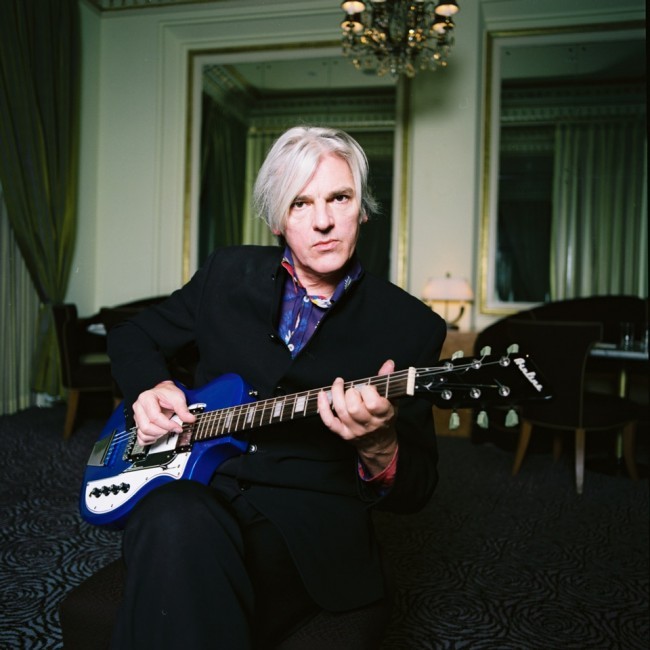 One other thing that Hitchcock seems surprised by is the new lease of life accorded to vinyl, specifically the seven-inch single. He’s not released anything on the format since 1995, yet over the last few years, he’s released a series of ‘Phantom 45s’, available for download from his website and soon to be collected as a limited Record Store Day release. “My Phantom 45 concept was that I like the idea of making a single with an A and a B-side and a cover, but music, like money, seems to be physically dwindling before it disappears altogether. Coins nowadays are about a third of the size they were when I was a kid – when I was ten, you’d sleep under a five pound note, if you were lucky enough to find one. And now, it’s all dwindling away, so I thought let’s have singles, but not actually bother to manufacture them.”

“Are many people putting out seven-inches these days?” he asks. I assure him that it remains as vital as ever, though they’ve sometimes adopted an quasi-fashion accessory status with certain groups of people. “Well, that’s the beginning – you’ve got to look lovingly at it, and then maybe you’ll play it.”

And this rather avuncular statement leads neatly into my final question – one that really gets him thinking. Ever since his early days as a Soft Boy, Hitchcock has always been something of an elder statesman of rock and roll, having been adopted as a figurehead relatively soon into his career. I ask him why he thinks this is.

“That’s because I’m from a previous time. I see myself as the last egg to hatch out from the 1960s. I felt that music went the wrong direction in 1968: that people got too stoned, and they got boring and rambling and fell apart. And, the same movement that had brought insight and inspiration also left everybody dull and fumbling and the lighthouse in their mind had switched off, the beacon was intermittent and then dead. But I just thought that the musical attitude from 1966 and 67’s short, intense, rich, semi-psychotic songs had a lot going for it. I just felt that, as an aesthetic, when pop turned into rock in 66, 67, and it’s in all the history books, that was when it peaked. Around the time of ‘Eight Miles High’, ‘Good Vibrations’, ‘Arnold Layne’, ‘Tomorrow Never Knows’ etc etc etc. So I think that’s why I’ve been an elder statesman for that era since I was 23.”

An elder statesman since he was my age; that’s quite a burden. “It’s a good time to become an elder statesman!” he assures me. I press the fifty-nine-year-old for any closing advice he may have for the new generation of aspiring younger statesmen.

“Find something that you really believe in, and think won’t harm anybody, and stick with it. It’s not what you think you ought to be championing, it’s what you can’t help championing. It might be trams, or it might be that there should be more branches of Harvey Nicks in Leeds apart from the small one in the middle, or that a huge monument to the Mekons and Gang of Four should be put up in the city centre.”

” it’s probably in you already, you just have to locate it.”

Love from London is out on Yep Roc Records on o4 March. See Robyn live at one of the following shows: