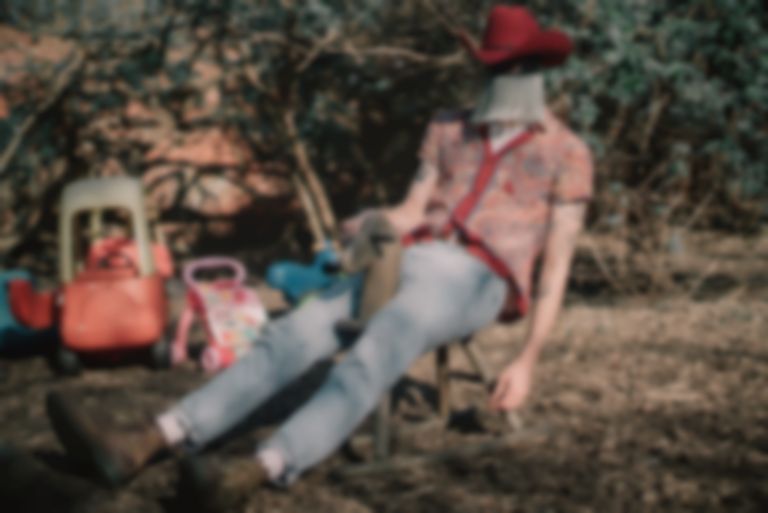 Meet Orville Peck, the ex-punk drummer signed to Nirvana's old label and channelling an outsider spirit into his inventive take on country music.

In a parallel universe Orville Peck could be fronting a legendary punk band, dancing for his life as a ballet professional or on the big screen pursuing his acting aspirations, but the likelihood is, in whichever stream you saw him, he’d still be a cowboy at heart.

In a photo he shared of his eight-year-old self - on the day debut album Pony was released - it’s clear he was born for this. He had the look down, a cowboy hat of sorts and a red and white neckerchief obscuring his face. The record is a masterful collection of Peck crooning for his life, packed with tales of a real and an imagined Wild West, with Peck yearning for lost loves - albeit while finding the love inside yourself. Stampeding through the heady highs and lows of adventure, Peck is a product of passion and an ability to communicate a steadfast vision of racing across the plains on horseback with his tassel-fringed mask still in tact.

Obscuring your face is often a ploy used by artists with a past that don’t want to be discovered, but the truth about Peck’s mask is a little different. There is no mask: “This is my face”, he jokes with his fringing billowing as he laughs. He even wears the mask as leaves to step back onto the streets of East London. His eclectic past has seen him galavanting, albeit not strictly on horseback, across the world, making music under various guises before settling into his true cowboy self and what could become the man behind the mask’s magnum opus.

“My grandfather taught himself loads of instruments”, Peck tells me, and that sense of doing things for yourself runs in the family. Picking up his father’s guitar was the start of it - through to teaching himself piano and then thrashing it out and then getting to the grips with the drums, on his own, so he could find his place in the punk scene. His family's theatrical backgrounds also appear to have instilled a burgeoning creative spirit within him which sees his talent reaches far beyond just the musical variety. Having trained as a dancer and dabbled in acting, his various artistic outlets were always a no brainer, just as his musical evolution seems to be reflect of his innate love of every genre. “It doesn’t feel like I’ve crossed genres. I’ve always just seen myself as a musician in the same way I’ve been an actor or a dancer or visual artist.” After all, it is all art.

"I definitely resonated with a lot of women country artists growing up...maybe I needed that when I was younger to connect to something that was a different point of view from a more marginalised place”

Growing up Peck stresses the importance of his multifaceted taste in music and no genre is off limit. From Cardi B to the country stars he grew up with, he’s not averse to “radio garbage” either. Patsy Cline is one of those stars. “I’ve realised her songs are so sad and so dark” Peck explains, “they often don’t sound it, but she had a really hard life in a lot of ways and her music really reflects that adding “all of her songs are basically about mental health.” Peck’s mental health is a topic which comes up in his music. In this moments he remembers himself “as a kid singing 'Walking After Midnight' which is probably the most depressing song ever written.” Dolly, Shania and Reba are all ports of call for Peck who wonders “if it’s as gay person, but I definitely resonated with a lot of women country artists growing up. Now, I listen to more men, I’m very comfortable with myself, maybe I needed that when I was younger to connect to something that was a different point of view from a more marginalised place.”

Peck has lived in places all over the world, and still thinks of London, South Africa and various parts of North America “home”, thus is the life of a cowboy, but instead of herding cattle Peck has been revelling in the glories of the cultural experiences and people he’s met along the way. The idea of being and feeling settled is that he consequently battles with. “If I’m in a place for too long I start to feel anxious” he explains. Like most experiences in life he’s aware that the negatives are something you’ve got to roll through to get to the good stuff: “I wouldn’t trade it for anything because I’ve met incredible people all around the world and had really enriching experiences culturally and mentally.” These are the experiences which come to fruition in the songs which make up Pony. Everyone songs about places and people, but no one does it quite like Peck. 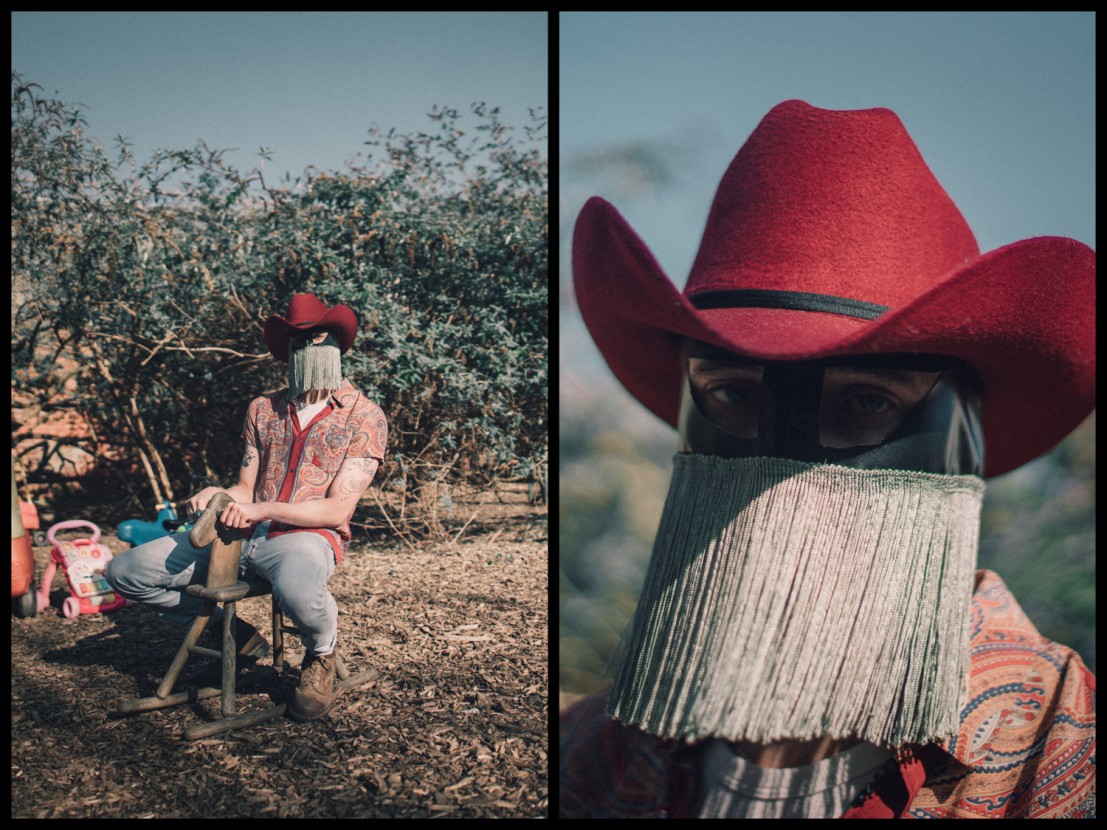 Peck's cowboy identity is something that’s always been on the inside and he’s now outwardly emitting in a more literal sense - but it's no different from being an outsider. “For my generation, who are stuck between baby boomers and young millenials, we’re this anxiety-driven generation where none of really know what we’re doing” he explains.

“We feel like we’re at the wheel without a license and the expectations are big, but probably not achievable like they were for previous generations.”

"I’m naturally someone who’s a bit of a loner: for me, that’s what a cowboy is, someone on the outside of town, so I think I know a lot of cowboys actually"

There are of course added complexities that can define this notion of feeling like you’re an outsider in your mind and within society: “You put that on top of innately being a queer person or a person of colour or something else that adds another element of feeling like you’re on the outside and, then for me, I’m naturally someone who’s a bit of a loner: for me, that’s what a cowboy is, someone on the outside of town, so I think I know a lot of cowboys actually.”

Our first introduction to Peck was “Big Sky”, a rumbling ode to the open plains and past lovers. The sound, the lyrics and the aesthetic (as Peck is keen to add) is very much all-in cowboy. It’s stark minimalism set it apart from emerging trends in country music which have seeing Maren Morris swinging for the pop charts and Lil Nas X’s Old Town Road bringing country-trap to the forefront of everyone’s attention. It’s debatable whether Peck is doing anything new with the genre or his sound, but even if he’s just a revivalist the fact that it’s Orville Peck in the riding seat is more than exciting enough.

Very much putting a place and some incredible faces to his most epic story, the music video for "Dead Of The Night" gives a glimpse into Peck’s world. Shot at Nevada's legendary Chicken Ranch brothel this is just one of the many aspects of Peck’s artistry which sees that extension of the term cowboy to refer to outsiders. Peck noticed the frequency of the word “cinematic” being used to describe the grandeur and emotional atmosphere which they create: “I think of songs visually first. I envision the look of a song. Not to try and sound faux artistic, but that’s how my mind words.”

In terms of all that emotiveness that seems so heavily ingrained he adds: “sometimes I approach song with what emotion I want to be evoked through the song rather than a chord progression or whatever. The response seems to be that people think the music is cinematic, but I guess that’s because I write it that way.” 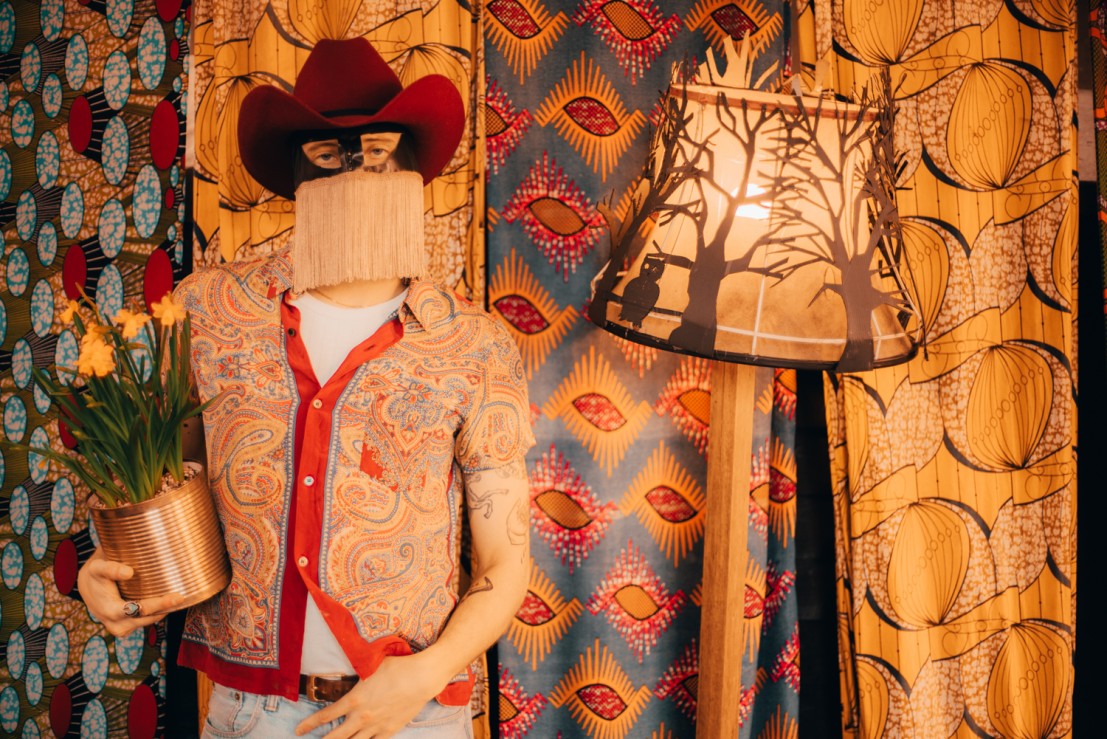 Pony can therefore be seen as soundtrack to this first chapter in the Orville Peck story and it’s all about “being broken-hearted about myself” he says. “Some of the most heartbreaking situations I’ve had are when everyone’s feeling something and I’m not feeling it. The absence of feeling is sometimes the hardest feeling. It’s more about me than it is about someone else.”

Album standout “Roses Are Falling” sounds almost like parody at points and even its spoken-word breakdown seems like something not to be taken with any seriousness. Thinking about songs like this and how Peck describes the themes of the record as being less about the heartbreak of relationships but more about the innermost seldom heartbreak he’s experienced getting to know himself it’s hard not to think about Peck is referring a version of himself as the imperfect “devil like you”. This is no mistake.

There’s the explicit tie between country music and the life of cowboy, but when stripped back to it’s raw core, Peck is exposing the anxious, questioning part of himself to always been a part of him. His struggles are laid bare. “I’m constantly torn about what I’m doing, where I’m going, who I am, big questions”, he says, ad and he channels this into the music.

“Over the past few years, I’ve learned to find the adventure in that struggle.” Adventure is where Peck is heading next and the best ones are those “without too much planning.” The biggest learning from his adventure so far? “I used to think I was a really open person, but I realised the older I’ve gotten that I’m pretty closed. Pony was a nice chance for me to feel like I was being exposing.”

Peck wants Pony “to feel like reading a really good book” and with this first album we get to know who Orville Peck is as a character, an enigma and regardless of the mask, without his face, this intimate portrait is more human than ever.

Pony is out now via Sub Pop