“Turning something destructive into something constructive is good,” Daisy Warne – aka electronic artist BABii – asserts decisively. This is the ethos at the core of BABii as a project; the furnace that powers those hypnotic melodies and dizzying, intricate production.

BABii’s sound is reminiscent of early Grimes in its fairy-like vocals, and of Purity Ring in the all-encompassing electronics accompanying them. Warne struggles to put it into words, settling on “kind of electronic, dreamy-sounding, but also really beat-y and loud at the same time.”

Despite having released only two singles thus far, BABii arrived as a seemingly fully formed venture. Warne has built a persona and entire aesthetic to accompany her music. It’s most clearly embodied in the recent video for sophomore single “SEiiZURE”, a pastel-to-neon-hued adventure in kawaii that offsets the compelling darkness of her sonic output.

“My persona is just what I’m like in real life – I like being a clown,” Warne laughs. “I think it’s funny sounding like a little kid sometimes, which is kind of funny, ‘cause the themes in my songs are quite serious and melodramatic sometimes,” she admits.

Along with debut single “PHANTOM”, the themes in “SEiiZURE” align with those of BABii’s planned forthcoming releases.

“[The songs] all come from the same place to be honest,” says Warne. “It’s that typical thing of me going through a horrible relationship, but I think I did it in a cool way – I hope! – that’s not cliché. I react emotionally to things, then make them into songs rather than getting angry at someone.” She pauses for a second before continuing: “but then I’m just getting angry at them in a song forever, which is strange!”

Warne expands on the importance of these emotional reactions, explaining how the fleeting nature of inspiration can make for frustrating situations: “Sometimes it’s annoying, if I’m sad, or angry, or even really happy about something, I just wanna make a song! People will try and comfort you or talk to you about it, and it’s like ‘I don’t wanna talk about this! I need to make something out of it! It’s gonna diminish really quickly if I can’t do it!’

“Sometimes I’ll get in an argument with someone and I’ll be sneakily on the notes on my phone writing words about it – it’s kind of bad actually! I don’t know if that’s a good thing to do or not… maybe it makes me outside of what’s actually going on. I can write lyrics so quickly when I’m in an emotional state. I guess that makes sense though, but it’s really hard if I’m not in that frame of mind; I’m trying to put myself back in that place to try and remember what I felt like.”

Probing into the specifics of her lyric-writing, Warne begins to unravel the story behind her mesmerising debut single, “PHANTOM”.

“’PHANTOM’ is when you’re thinking about someone so much, and you haven’t seen them in a really long time, and they morph in your brain quite a lot. The more you think about them, the more it becomes the weird fake reality in your brain, which is why it’s called ‘PHANTOM. It’s not a real person, it’s a fake version of them in your head which doesn’t really exist.”

While “PHANTOM”’s meticulous – and at times frantic – production may pull focus from Warne’s lyrics, listening a little harder reveals just how perfectly the track captures that universal realisation of the complexities of estrangement. “Sonder”, a neologism coined by YouTuber John Koenig, also summarises that feeling: “the realisation that each random passerby is living a life as vivid and complex as your own.” Warne agrees; this is exactly the obscure sorrow she aimed to portray.

“I can’t really figure out what place I was in when I wrote the verse lyrics,” Warne continues. “Maybe I’d seen some Facebook thing – something that my ex-boyfriend did – and felt a bit gobsmacked: ‘I lost my breath / to the phantom ex’. The person that was in my brain didn’t feel real – it’s hard to explain!

“Originally the song was called ‘Phantom Five’: there’s loads of numbers at the end, and I sing them so fast that you don’t realise that the number five is missing. I tried to make a phantom number in the lyrics at the end.”

This conceptual witchcraft is exactly what elevates BABii’s sound above the average electronic upstart. Delving into the making of “SEiiZURE”, Warne reveals more about the obsession with numbers that transforms her songs from beguiling pop into hypnotic incantations.

“That one originally had another number in it, which is kind of weird – I’ve got this thing with numbers in songs, for some reason! The first verse is feeling like one with someone, but also not feeling content. There was another verse which for some reason I took out – I can’t really remember why – but it was the number two: when you’re with someone but you feel kind of separate from them. And then the end is the number three, which is like when they’ve moved on and there’s someone else. It’s the fear of seeing an ex with a new person – that’s what the chorus is about – a really basic thing, but it’s me getting a bit sad and vomiting it out as a song.”

It was by chance that “SEiiZURE” even reached completion, let alone being released as one of BABii’s first singles. Warne was close to trashing it, but explains how collaborator and tourmate Iglooghost swooped in and encouraged her to take it back to the studio.

“He was listening to some of tiny little clips of songs that I was writing, and was like, ‘what is this? This is so cool!’ I was like, ‘oh, I dunno, I’m not gonna use it, it’s kind of rubbish,’ and he was like, ‘no, you have to give it a go!’ Now I really love it, which is kind of weird! It nearly didn’t exist.” 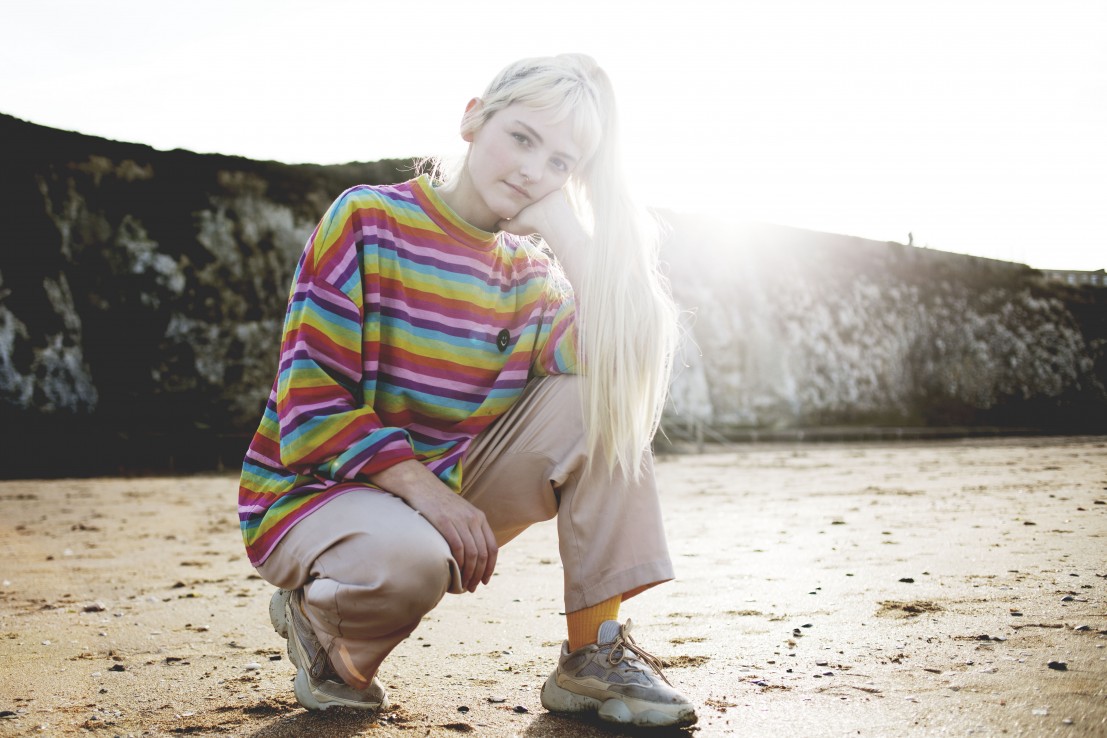 Iglooghost is not the only friend who’s stepped in to help Warne steer BABii in the best possible direction. She cites dub producer Adrian Sherwood – whose co-production appears on “PHANTOM” – as another key player in bringing the project to fruition, however unexpected his input.

“I moved back to my hometown and everything had kind of fallen apart – my band at the time, and all the stuff I was doing. I lost quite a lot of confidence. I moved back to my hometow and kept it on the quiet that I made [music] and just got a normal job and lived an easy life for a little bit. Adrian kept asking me to come to his studio, and I was like, ‘how the hell does this guy even know I do music? Who is this old guy who says I can come to his house!?’ I wasn’t spooked by it, ‘cause he’s just a nice guy, but I was bit confused. An old family friend or something had told him that I do music.

“I eventually went round there, and I originally started working with his son – he does grime and drill stuff now, which is kind of fun. [Adrian’s] ears perked up and he was like, ‘ah! Do you wanna make an album?’ and I was like… ‘yeah?’ So then I started doing that.

“BABii has happened because of lots of other people,” Warne laughs. “I didn’t even think about that before! It’s kind of nice, ‘cause it doesn’t feel contrived, or like I’ve been trying really hard. I’ve worked my arse off, don’t get me wrong, but it’s kind of naturally happened. It just feels like it’s meant to be happening, rather than that I’ve forced it, which is really cool.”

Just letting it happen seems to be leading BABii down the right path, with two shows at Austin’s SXSW now in the bag. Warne describes here live set as having ”very one-man-band vibes” – “I hit drums pads and play a synth at the same time, then I have a vocal pedal and I’m using all my limbs at the same time to try and piece it together! It can be lonely sometimes, but also I don’t have to rely on anybody.”

Whilst working alone confers complete creative freedom, it also leaves one in a vacuum without others to bounce ideas against. For Warne, this isn’t a problem. Aside from Adrian Sherwood’s occasional co-production input, she’s proud to “produce all her own beats, write all her own words, make all her own pictures and use all her limbs and voice when she plays live” – as per her SXSW bio. Inspiration can be found anywhere, if you look and listen hard enough.

“I’m inspired by stuff, rather than just music,” Warne explains. “I’m not really one for referencing things that much either. I literally just go in with no real intention or real idea about what [a song] is going to be and then just let a thing grow. I guess maybe some [musical influences] do sneak into my brain – I like annoying electronic music which is really aggressive on your ears. That’s the kind of music that I listen to a lot. There’s other things in there too: I like pop music – I like JoJo loads – and also the Pocahontas soundtrack! It’s kind of a combination of all those things: Pocahontas, JoJo, and really aggressive, loud, electronic music.”

While this might seem like an incongruous combination, there’s no doubt that it’s working for Warne. Considering that her releases are currently coming via Death Waltz Originals – more famous for their movie soundtracks than any electro-pop output ­– perhaps Pocahontas is a bigger influence than is immediately apparent.

“There’s a couple more songs I’m gonna release,” Warne discloses, when asked of BABii’s near future plans. “I’m gonna try and think of some funny things to do alongside them that aren’t music videos,” she adds, “maybe a livestream, or something.”

BABii’s uniquely holistic, DIY approach posits her as an exciting new force in British electro-pop, and if nothing else the backing of Iglooghost and Adrian Sherwood should mark her out as one to watch in the near future. We recommend not leaving her unattended or unlistened to for any longer, if you can help it.

“PHANTOM” and “SEiiZURE” are out now, via Death Waltz Originals.