NY collective MICHELLE are keeping their creative process spicy through a strong family bond and a love of timeless music.

MICHELLE are a group like no other. The beautifully diverse selection of six – namely Sofia D’Angelo, Julian Kaufman, Charlie Kilgore, Layla Ku, Emma Lee, and Jamee Lockard – came together in New York during the summer of 2018; one remix with Let’s Eat Grandma and a debut album later, we find the collective ready to release their second project, AFTER DINNER WE TALK DREAMS, upon a post-pandemic world.

I meet MICHELLE via video link, but this isn’t your average Zoom call. Kaufman greets me and begins by blessing the interview with palo santo, and as the others join it’s immediately apparent how attentive and polite they are. As the conversation flows, they distribute answers equally between all six of them, as though telepathically knowing when to let another have time to speak. Time is taken to formulate answers carefully and considerately. It’s clear that this collective isn’t just a group of young musicians; their connection spans further and wider than that.

There’s an innate individuality woven into their debut album HEATWAVE; combining funk and soul with a DIY feel, it culminates in a project that celebrates each of their own perspectives. This is what they’ve refined and perfected with AFTER DINNER WE TALK DREAMS, and their signature sounds of intricately layered vocals, vibrant production, and sultry synthesisers have graduated into the next level. This also applies to the members themselves; if HEATWAVE was the group at the end of their youth, AFTER DINNER WE TALK DREAMS is a glorious coming-of-age.

Each of the six are undeniably unique, with upbringings unsurprisingly infused with music. Kaufman’s summer camps led to New York City Guitar School and a high school studio internship; Lee’s love of harmonisation grew into providing backing vocals for a band; then there was D’Angelo’s love of performing as a child. “I would tell everyone, ‘when I grow up I want to be a rock star’, and then when they asked me that same question at 15 or 16, I gave them the same answer,” shares D’Angelo. “Having gone to an all-girls private school for my entire life, that's not really the answer that they had in mind,” she says, but that didn’t stop her ending up in New York University studying music full-time.

Lockard found her love of bass through guitar lessons, which she chose thinking it would be a “bullshit elective period”; instead, she became one of the founding members of the now defunct Manhattan Girls Chorus, going on to do backing vocals for the likes of Demi Lovato, Steven Tyler, and Sting. Kilgore’s love of piano led her to meet bandmates at the Berklee Summer Jazz Intensive, and while Ku hated attention as a child, both her parents were musicians.

So, why these six? “How does anyone choose their friends, you know?” says Kaufman. “They kind of fall into your life, and you're like, these are the people that I want to keep around.” Hearing all their stories, Kaufman’s name popped up as the catalyst of MICHELLE just about every time. D’Angelo’s rock band met Kaufman when out gigging; he discovered Lee when she was working with another artist, and Kilgore was introduced to him when searching for a gig, resulting in his recruitment of Lockard and Ku. 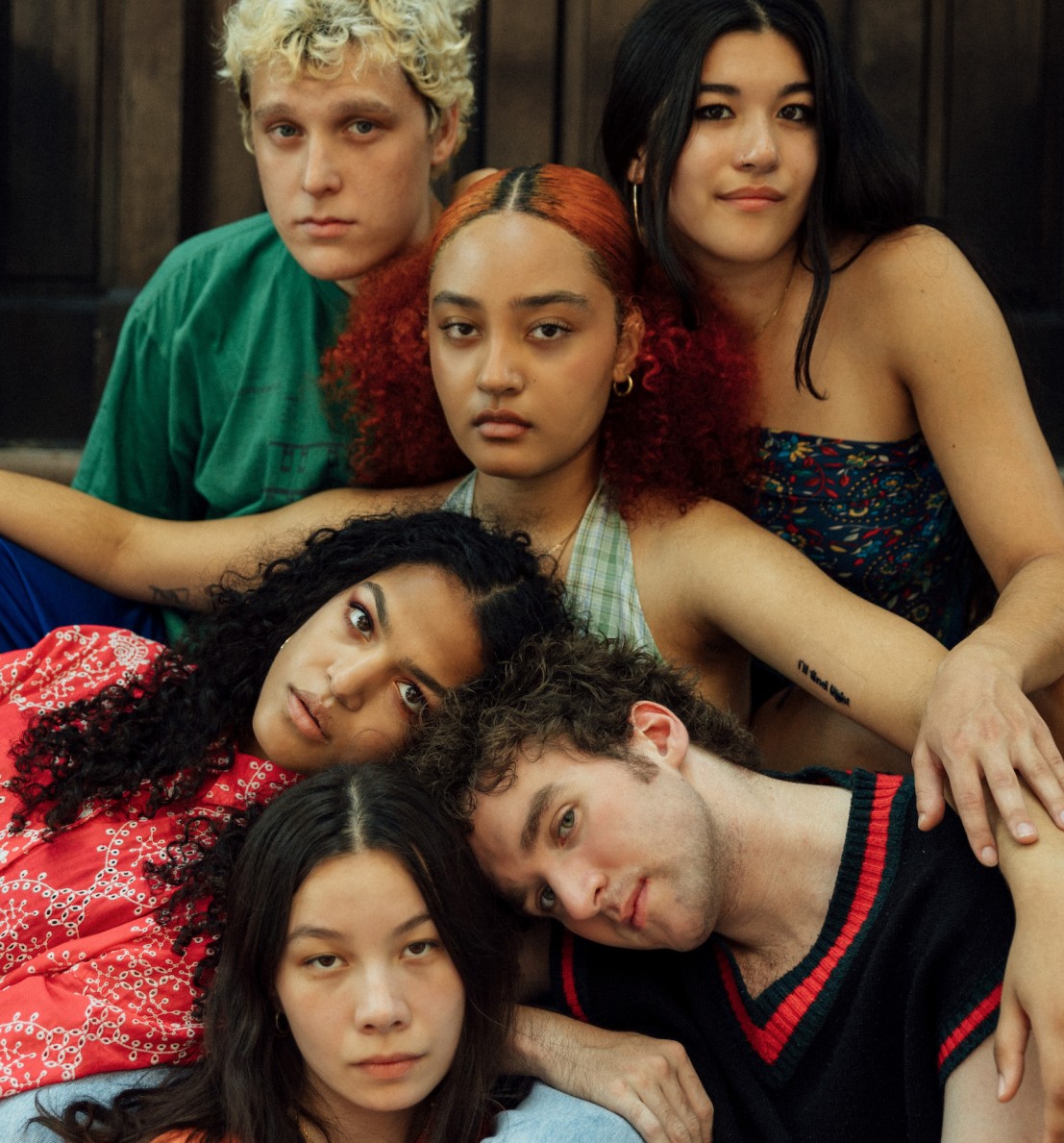 Yet, even with training in jazz, musical theatre and choral music, Ku suffered immensely from stage fright, so, when her schoolmate Kilgore asked her to join a certain band, it took a lot of willpower to do so. “Charlie's my friend, so I was like ‘yeah I'll do it’, but I was terrified,” confesses Ku. “I recorded the song I had sent him which is ‘KIP’ now. I was shocked that I was able to do so, but I felt very comfortable just because this was an environment with someone I trusted.”

MICHELLE label themselves as a collective instead of a band, and it’s a purposeful choice. “In bands you have a drummer, you have a singer, a guitarist, a bassist, a keyboard player. They get together and they play the music,” explains Kaufman. “Bands don't make their own album covers and conceptualise their own music videos. We do, and everybody writes in the same amount of way; everybody does everything.

“When we say collective it's not because we're not tight and not tight knit or together. I just think it's because our roles and the roles of MICHELLE are more fluid,” he continues, Kilgore adding “It's not just all hands on deck, it's all hands on all possible decks at the same time.”

“It’s not smooth sailing, but I don't think it was ever supposed to be,” replies D’Angelo regarding finding ways to work together collaboratively. With such rich and diverse backgrounds and training across the group, you would think that writing songs together could prove disastrous, but they’ve found a way around it. Switching up the pairings of vocalists (D’Angelo, Ku, Lee, and Lockard) with one or both producers (Kaufman and Kilgore), MICHELLE use variety to keep things spicy. “We try to mix and match however many different iterations of MICHELLE pairings or trios as we can,” continues D’Angelo. “So that we can all bring our backgrounds together in the most unique ways possible.”

However, MICHELLE don’t just collaborate, they also teach and learn from each other. “Sometimes, if I want to write a killer melody, I will think ‘what would this other member of MICHELLE do?’” explains Lockard. “I've definitely been like, ‘what would Emma write to this?’ or ‘what would Julian write?’, so yeah, I think we learn from each other.” It doesn’t stop with music either, as Lee adds how she’s learnt both guitar from Kilgore and how to perfect digital art on Procreate from Ku. “There's so many resources within the six of us and we get to use all these things,” she says. “So there’s a lot of learning, and a lot of teaching and sharing.”

Likening MICHELLE to similar groups who came together at a younger age, the six members agree that they find their strength in, and with, each other. “I think the strength in what we do is everybody gets to see a part of themselves in the final product or in the discourse before the thing gets made,” says Lee. “I don't think we have a stronger vision or a more valid anything than any other group, but I think because there are so many of us who have different interests, we go through the work to make sure everybody feels proud of the thing at the end. If we decided that one person was gonna lead the whole thing, I think it'd be a shit show, so because we decide to disagree and argue, and then celebrate and share all these things, I think that definitely makes us stronger.” 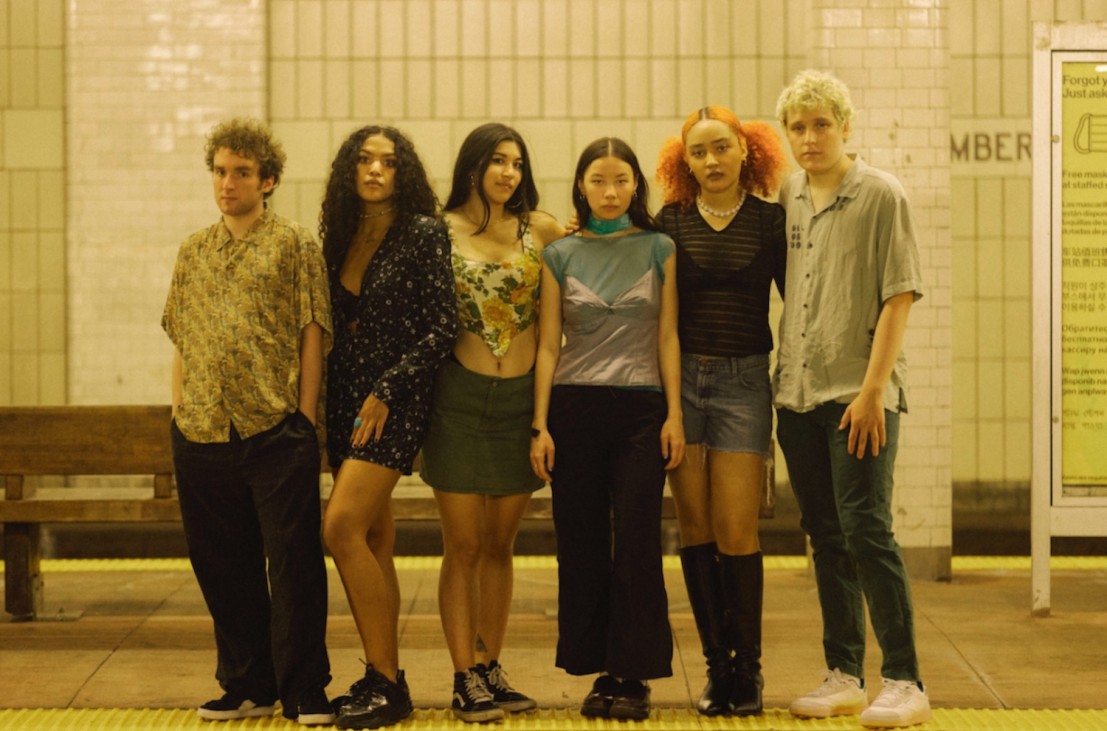 AFTER DINNER WE TALK DREAMS is an album that’s noticeably (and even jarringly) different to HEATWAVE in places. Alongside the collective growing out of their youth, they’ve added hints of rock and more alternative genres across the 14 tracks, and there’s a noticeable step up in production techniques. “LAYLA IN THE ROCKET”, standing out within the album for all the right reasons, sees Ku deliver powerhouse vocals over heavy guitar paired with analog synth to boot. You’d think the drastic change in production would put listeners off, but all of this is not without reason. “If we had spent two more years on HEATWAVE and had the money to go to studios, it would sound like this too,” explains Kaufman. “We had to make it in such a short period of time, and with HEATWAVE we basically made demos and then had to mix our demos ourselves.”

I ask MICHELLE what they think the biggest thing is that’s changed since album one. “I won't say genre because I think we're trying to release that and just focus on what it is we're composing when we're making music these days,” replies Ku, but Kilgore goes the extra layer. “The six of us is basically the only thing that hasn't totally flipped on its head since the production of HEATWAVE,” he answers. “The world and the way that people are moving through it is completely different than it was in 2018. MICHELLE has been a real beacon of stability for the past couple of years.”

And whilst the collective has provided some stability for its members during the pandemic, the creativity within has continued to be as open as ever. Naturally, MICHELLE’s influences range across a variety of genres but again, it only helps them. “Joni Mitchell is a really huge one for a lot of us just in terms of lyrics,” says Kilgore. “Everyone takes so much inspiration from so many different places that on every MICHELLE song you can take a slot machine and just pull the lever.”

“SYNCOPATE” is a shining example of this. Released as the lead single from AFTER DINNER WE TALK DREAMS, the infectious track oozes sex, style and sass (“I can’t stop for more than a minute / It’s my body, I need you in it”). It’s innate sense of joy is found from start to finish, but the song concentrates this feeling and is over as fast as it began. Running at just under two minutes, it’s hard to not correlate its frugal length with rising artists like PinkPantheress, whose short songs have caused a stir across social media and the music world. As the future of music seems to be getting shorter and shorter in song length, you could assume it was a conscious decision by the collective to be on trend. However, when posed with this, the six couldn’t disagree more.

“I don't think that's the future of music. Period. I think ‘SYNCOPATE’ is short because I didn't know where else to go with it!” says Kaufman. “On TikTok, when songs go viral, there's only a ten second snippet of them going viral, so it really doesn't matter how long the rest of the song is, you know? I think the art of songwriting is not as strong as it used to be, so that doesn't lead to as much of the beautiful long bridge or the beautiful outro, but I don't think that's the worst thing in the world. Music is still amazing.”

“All of us share a love of timeless songwriting and a lot of timeless songs. Some of them are five minutes long, and some of them have these beautiful sections, and each section has its own story within itself, whether that's the melody or whether it's the lyrics or what have you,” continues D’Angelo. “People know good songs when they hear them whether they're a minute long, or ten minutes long. Yeah, [Taylor Swift’s] ‘All Too Well (10 Minute Version)’ - people are sobbing to that! So, the two-minute track, the thirty-second track; it’s happening now. The future? We’ll know when we get there.”

After Dinner We Talk Dreams is out now via Transgressive / Canvasback.