“We love coming to London,” states Local Natives’ Taylor Rice as he leans back into a comfy sofa in an office of their label’s London HQ. “It was our home away from home for a long time, so coming back feels cosy and familiar, although it feels like a lifetime ago that we were last here…”

It does indeed seem like a lifetime ago that tracks such as ‘Who Knows, Who Cares’ and ‘World News’ flooded blogs and radio playlists, leading the Californian group’s name to start appearing on festival bills far and wide. The band are in high spirits tonight, chatting excitedly about having seen their first ever Premier League match at Chelsea the previous evening, and both drummer Matt Frazier and guitarist/vocalist Taylor Rice are extremely eager to discuss their second record, Hummingbird. So we indulge them, first addressing the fact that all has been eerily quiet in the Local Natives camp over the past 12 months.

“We’ve been working on the new record, so we’ve been at home quite a bit,” Matt responds. “We spent the whole summer in Brooklyn, recording the record with Aaron Dessner. We finished up at the end of the summer, and now we’re just getting back into live mode, because it’s been so long – interpreting the new songs for live, and re-entering that whole world.”

Local Natives first stormed to our full attention back in 2010 with the release of Gorilla Manor, a debut record seeped in the sun-laden harmonies and lush, layered melodies. A light and gentle record, its West Coast creation can be felt and heard from start to finish. So traversing the States to record in Brooklyn must have had an impression on the band, and made a mark on the recording.

“Yeah, it’s really different!” Taylor responds. “We had our own little rehearsal/studio space in Silverlake where we live, and we were there for about 8 months, really working on the songs and doing in depth demos with them. So the songs were pretty fleshed out, but we really wanted to go somewhere else – get out of LA, put ourselves outside of our comfort zones, away from home distractions and to get in that state of being open to new things. And Brooklyn was great. We were at Aaron’s house – he lives on the bottom floor with his family, we were on the middle floor, the top floor and in the attic, which is where I slept. Then the garage in the back yard is where we record, so it was all compact and we had our own little world going on there for a while.”

A figure that’s well on his way to becoming as respected-a-producer as he is a musician, (particularly after the sterling work that he did producing Sharon Van Etten’s Tramp) The National’s Aaron Dessner was brought on board to assist in the creation of Hummingbird. “He’s a great guy!” Taylor states, enthusiastically. “But regardless or whether it was Aaron or not, we were very nervous and hesitant to work with any producer, or to have any outside help at all. When we made our first record, every part was written before we went to record. And on this one, the songs were pretty much done. But we’d just met Aaron on tour – it was our very last tour actually, with The National. We made friends with them, and joked over drinks after shows that we could work together on the next album. But I don’t think any of us really took it seriously. And then when we got home, we were talking about it and meeting with producers, and nothing felt right. So we thought we should just do it on our own – but we wanted help, especially with recording. Then we remembered – the Aaron lightbulb went off – and we emailed him. He was on vacation but he wrote back super excited.”

“The relationship worked really well,” Taylor continues. “There were no horror stories, he was really good at helping us to maintain an openness and to allow an air of spontaneity. He was good at saying ‘the first take is fine, you don’t need a second take’. Even if we argued that there was a mistake, he’d say ‘first take is fine, leave it in there!’ And he’d record on-the-fly moments – he’d hit record, and I wouldn’t be ready to play, and he’d get us to play something… anything. So pushing us outside of our comfort zone in little in ways like that helped to keep this air of spontaneity.”

Second albums can be feared creatures. They’re items that are longed for by fans, but also possess the power to strike fear into the hearts of bands. Experiencing the sweet comfort of success with a first album can inspire a sense of trepidation when creating the second. “Will it be received as well?” “Can we push our music further, or will that alienate our fans?” The mindset when going in to create a second album is a notoriously tricky one to handle, so did the band find their second album to be as difficult as these things are rumoured to be? “I don’t know if it was hard,” Matt responds, deliberately, “it was just a totally different experience. Because like everyone says, you have your whole life to make your first record and then this second one was so much more compact – obviously we wanted to take our time and do it right, and wait until we were happy with the final product. But at the same time, we knew we couldn’t take our sweet time and wait five years to make a new record, we wanted to get something out.”

“The thing about the first record was that some of the songs were written in 2008,” he continues, “some were written a couple of years before that so the timing was way more compact this time around. And I think just wanting to try to push ourselves again, the whole getting outside of our comfort zone thing, and musically as well – not making the same record, really trying new things, new instruments, thinking ‘not everything has to be totally organic, maybe we can try some synthetic instruments’. Stuff like that was a challenge… but a good challenge! I think it gave the record a maturity. But I think that when you get into lyrical content, that in itself was a totally different experience. I think it was a much more personal record for a lot of people. The first record was more fun and feel good, and there’s a lot of that still on this record, but I think there are some high highs and some deeper low lows. It’s emotionally charged that way.”

A huge amount of time spent on the road, the departure of band member Andy Hamm turning the five piece into a four piece and tragic circumstances in their personal lives left an indelible impression upon this latest body of work. “There’s an element of some of the struggles of touring , but honestly, most of the touring is highs. We really love touring and we love playing live, I think it’s kind of feeding for us. But there were more interpersonal things that didn’t have to do with necessarily the band, or being on the road that affected things. Interpersonal relationships are difficult on the road, for sure, and there are other kinds of relationships that struggled in one way or another. And there was an unexpected death of a close family member, and there were some health issues that were unexpected. So you know, just things that we didn’t really see coming that hit us when we were ready to start writing.” 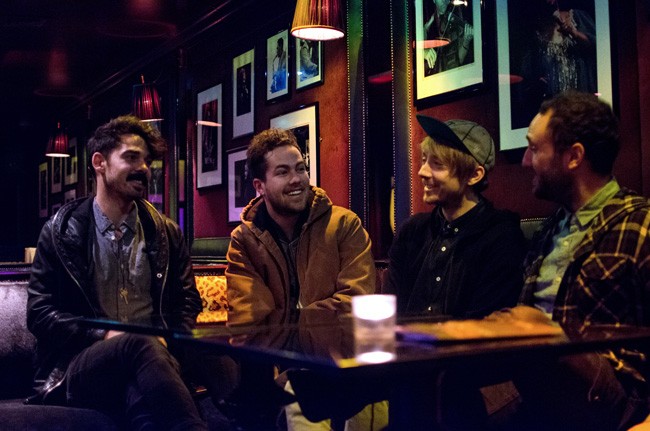 The impressive (and slightly overwhelming) tour schedule that succeeded the release of Gorilla Manor took the Silverlake residents away from the comfortable surroundings of the home/studio that played host to the creation of their debut, and catapulted them onto stages and festival bills around the world. Their live reputation preceded them wherever they went, with crowds consistently impressed by the energy that the band would pour into their shows, and the technical, intuitive skills that the group had garnered along the way. So is the thought of getting back out on the road something that they’re excited about? ”Yeah, definitely,” Taylor answers readily, a response quickly confirmed by his bandmate. “Definitely, definitely, definitely!”

“It’s been really interesting because we weren’t worrying about how to play these songs live when we made this record,” Taylor elaborates. “The first record was us playing in a room and we’d figure out that ‘that’ was a song. On this record, a lot of the writing process is definitely still collaborative and democratic, it’s still us playing together a lot, but we just didn’t worry about it. We said ‘let’s expand off in this direction and not care and see what that takes us’. So it’s been an interesting challenge to work out how to do these songs live. It’s been expanding our gear and out live palette, so it’s been a really fun process.”

And how about the experience of being a full time, touring musician? Does that live up to the childhood fantasy?” I don’t think I ever really thought about it!” Taylor responds. “You only think about that in the most wide eyed, visceral ways, you think about what it’d be like to be on stage. RIght now, i’m thinking about At The Drive In because when I was learning guitar – Ryan and I picked up the guitar when we were like 12 years old – and At The Drive In was our favourite band. So that’s the kind of thing I’d think about, what it’d be like to be on stage and playing guitar. But I never thought about the ins and outs of the daily life. The experiences we’ve had though, playing to all of these people all over the world… never in my wildest expectations did I think that that would happen, so it’s been really amazing on that level. And we got to play with a full orchestra at the Walt Disney concert hall in Los Angeles – that was literally my musical dream and we were able to do that last year. So that was as good as the hype, I’d say.”

With a new album about to finally reach the hands of avid fans, and a band that are chomping on the bit to get back on the road, Matt reflects upon his ambitions for the coming year. “I’d love for us to go to South America because we’ve never played there before,” he says. “I don’t know if we have any fans there! But I’d just love to expand even more than we have and to see some new places.In a more general sense, as long as we can keep doing this – we hope people will enjoy the new music and come to the shows, so we can make another new record, that’d be awesome.”

Hummingbird will be released through Infectious Records on 28 January.