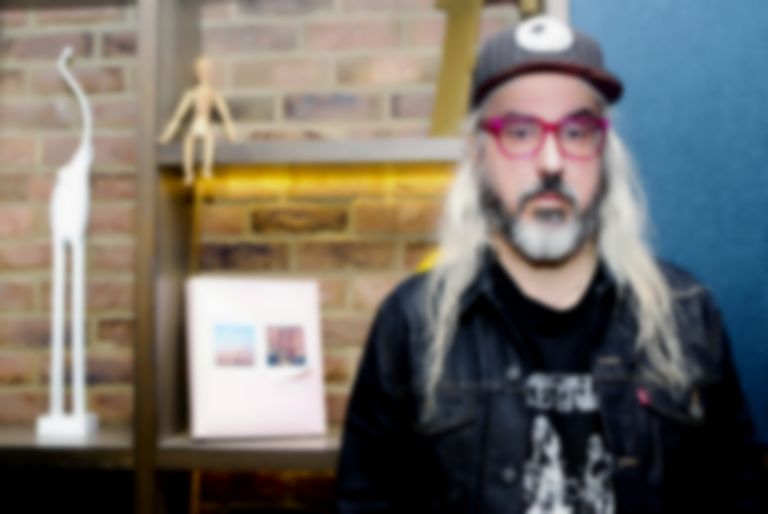 J Mascis is a man of contradictions and often quite hard to decipher. Starting as a hardcore punk drummer in the early 80’s and then emerging out of Amherst, Massachusetts as the guitarist/main vocalist of legendary Dinosaur Jr., he soon became famous for his blisteringly untrained guitar solos and defiantly fuzzy riffs which gained him the reputation of being the “loudest” guitarist on the planet.

In the 90s, whist going metal with his side project Upsidedown Cross, Mascis got into meditation, something he since then (somehow surprisingly, given the music he has always been into) has taken very seriously and continued for pretty much all his life.

The last decade saw him carrying on with his always superb Dinosaur Jr., starting other “extremely loud” projects and finally releasing some solo material - first as J Mascis + The Fog, then since 2011’s Several Shades of Why simply under his own name. Re-contextualizing his raucous style of guitar and songwriting in a largely stripped-down country/folk environment, his solo work makes his distinctive nasal vocals stand out magnificently as well as showing what a versatile artist Mascis can be.

J and I met up in his hotel in Camden, London to discuss his new solo record Tied to a Star, another acoustic masterpiece, released this week on Sub Pop. The album was recorded and produced by Mascis and mixed by long-time collaborator John Agnello at Bisquiteen Studios in Amherst, MA. “Everything was done over a shorter amount of time than my previous solo record”, J points out.

The other main difference with Several Shades of Why is that there were far less guest appearances, among which Chan Marshall perhaps stands out, providing backing vocals on a track. “I never got to see her. I was just texting her and stuff, but that was fun,” J recalls.

Marq Spusta (who had worked on Several Shades of Why and the last two Dinosaur Jr. records, as well as drawing all the band’s tour posters in the last few years) did the artwork for Tied to a Star. “We usually either just look through his stuff together or he would do something new and then I will see if I like it”, J explains. “The cover of the new album is a pre-existing drawing that he had already done and I really liked.”

Keeping up with all the projects Mascis has been involved in over the last few years or so is almost impossible. I am curious to know if out of all the records he has made in his life there is perhaps one that holds a special place in his heart. “I like Upsidedown Cross best for some reason”, he confesses. That was the debut full-length of the eponymous doom metal band J was in back in the 90s.

More recently (among other things) Mascis has founded the stoner metal group Witch, released a psychedelic instrumental record with Heavy Blanket and played with supergroup Sweet Apple, together with Tim Parnin and John Petkovic of Cobra Verd and Dave Sweetapple of Witch. Sweet Apple has actually just put out their sophomore album The Golden Age Of Glitter, but this time J only played drums and guitar on some songs, without taking a lead part in the songwriting process. “I was barely involved with it, I am not even sure if I am on it”, he giggles in his unique childish way. “I guess I am on it a little bit….” Apparently at the moment he’s working on a record with some of the guys that were in Witch with him. “We recorded an entire album but we haven’t finished it yet as we kinda need to find a singer for it.”

Over the last couple of years Mascis also wrote the soundtrack to Laurie Collyer’s Sunlight Jr (starring Matt Dillon and Naomi Watts), Allison Anders’ Strutter and a film about a famous yoga-chanting singer. “I think there is a big relationship between music and cinema”, he tells me. “There is music in most movies and stuff so it has clearly been a big thing.”

And if that wasn’t enough, lately J played a caretaker in the new Richard Ayoade’s black comedy The Double too. “It was fun, it’s funny how movies are made”, he says of the acting experience. “I shot just one day in some weird old abandoned hospital somewhere in England.”

Last April, along with Joan Jett, Kim Gordon, St. Vincent and Deer Tick’s John McCauley, Mascis played with the surviving members of Nirvana to commemorate the 20th anniversary of Kurt Cobain’s death. It’s now common knowledge that back in the days Cobain actually invited the Dinosaur Jr. frontman to join Nirvana but he politely turned down the offer, something most people would now probably regret. “I have never really thought about it much…” is all he can say.

Kim Gordon once said that Dinosaur Jr. were the perfect band, so I am curious to know - what band J would describe as being the perfect band? Without hesitating, he immediately answers, “The Stooges”. And what about interesting new acts that have recently caught his attention? “I like Steve Gunn a lot, I saw him a few weeks ago and I really like him”, he reveals.

Mascis has been living in Amherst, MA all his life, but lately there have been rumours that he might have moved to Berlin, where his wife is originally from. “ No, I still live in Massachusetts”, he rectifies. “I have just been spending a lot of time there lately.” When asked if he has ever considered moving there he just makes his typical “bewildered J face” and mumbles an ‘’I don’t know’’.

J has studied with Hindu religious leader Mātā Amṛtānandamayī Devī (aka Amma) since 1995 and has recently played at her 60th birthday in India. “Unfortunately I don’t meditate as much as I should anymore,” he admits. “Since I had a kid it has become harder to get together with Amma. But I still consider myself a pretty spiritual person. I mean, you do that for yourself ultimately. I guess sometimes even music can be meditative but I don’t think about it too much.”

I finally ask him what between writing, recording and performing live he enjoys the most and it’s probably playing live. “It could be because it’s shorter and more definitive, you just play for a certain amount of time and then it’s over. Whereas the other things are kinda open-ended”, he explains.

Tied to a Star is out on 25th August via Subpop.