The year 2022, hard as it is to believe, will mark 10 years since Lily Somerville and Megan Markwick first met and became best friends whilst studying music at Falmouth University. A friendship which, of course, has flourished and evolved into the experimental pop outfit IDER.

The two halves of London-based duo IDER share a look of incredulity as I remind the pair of an upcoming and momentous anniversary. "Christ...has it really been that long?" exclaims Somerville, from hers and Markwick’s shared London flat. “That’s frightening when you think about it. Time just flies. We’ve done so much in that time.”

Can you both remember your first impressions of each other, that day at Falmouth, I ask? “I just remember Meg being really smiley,” recalls Somerville. “She really captured people’s gaze. I thought straight away, ‘she’s really cool. I need to get her in my band. And my first impression was, ‘who is this weirdo?’” chuckles Markwick.After a year in which many close friendships have been tested by the constraints of lockdown, the London-based BFFs, creative partners and flatmates are, it’s safe to say, tighter than ever. 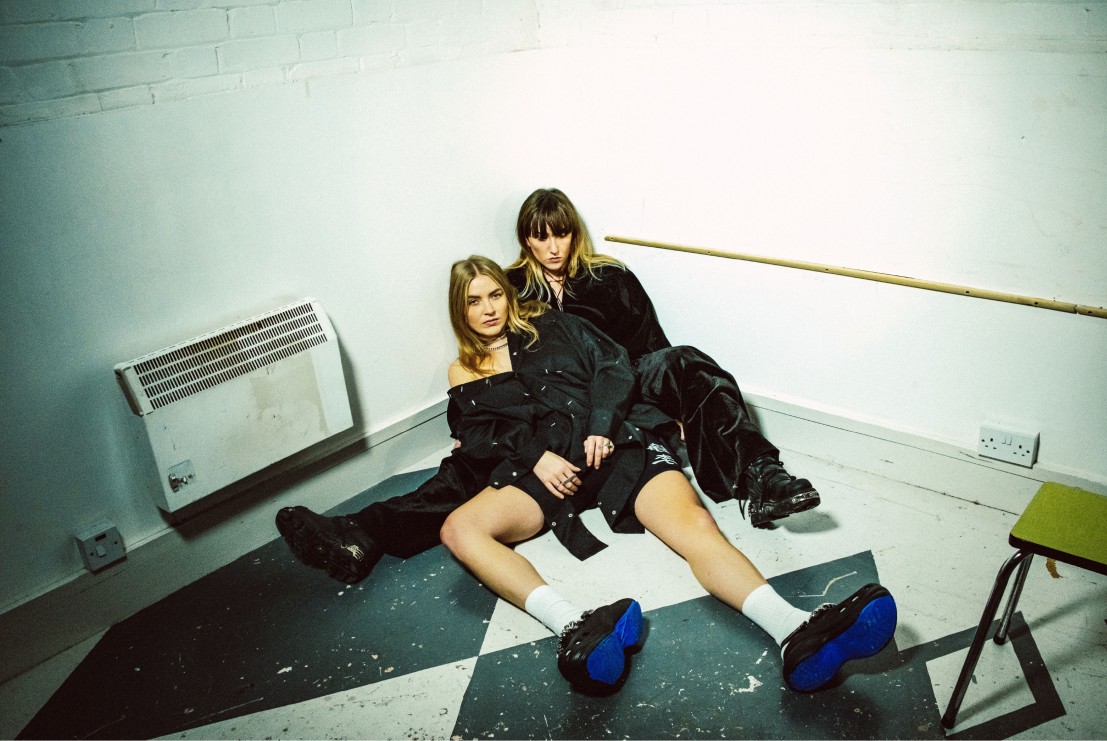 Not that we ever doubted the strength of their friendship, mind. From the moment they first emerged back in 2016, Markwick and Somerville’s deep, intuitive bond has been their unique calling card. Theirs is a partnership, both personally and artistically, borne of perfect coalescence: the duo’s shared anxieties over adulthood; their mutual appreciation for R&B-infused pop eclecticism; their ability to sweetly harmonise like telepathic siblings.

Those attributes were, of course, the very foundations of IDER’s 2019 debut LP Emotional Education. One of that year’s standout records, IDER’s emotive synth-pop claimed the hearts of both fans and critics and took them around the world supporting the likes of Tegan and Sara and Sigrid.

Above all else, though, IDER’s success was a welcome reminder that the best, most affecting pop music – in an age of songwriting-by-committee – often comes from deep kindred spirits.

“The secret to this friendship is trust and communication,” says Markwick. “Who we are in our music is based around our friendship and the fact we can be so honest with each other. So, when we’re making music, we bring out the best in each other.”

Somerville and Markwick are speaking to Best Fit via Zoom from their shared London flat. It’s a setting that will, of course, be familiar if you’ve seen the enchanting video for the duo’s comeback single “Saturday”, released back in October. Directed by their longtime friend and collaborator Lewis Knaggs, the video, filmed in their basement, was a haunting, claustrophobic affair, perfectly capturing the song’s themes of lockdown-induced anxiety.

As well as being 2020’s finest lockdown-inspired song, “Saturday” also marked the arrival of what the duo describes as “IDER 2.0”. “It’s still us,” says Markwick. “We’re not starting from scratch. This is the next chapter for us. We feel like we have a real ownership over what we’re doing, more than ever. We co-produced and mixed everything, we’re releasing the new record independently. It’s a really exciting time.”

What’s remarkable is how “IDER 2.0” actually began in the most inauspicious of circumstances. Back in February 2020, Somerville and Markwick, having finally completed the lengthy touring commitments for their debut Emotional Education, had no immediate plans beyond letting their collective hair down. They booked flights to their favourite hedonist capital, Berlin, and arranged to stay at a friend’s flat. For three weeks, at least, the duo had, they fondly recall, “an amazing time. We went out every night. Met so many people. We wrote loads of new music. It was really inspiring.”

By the end of March 2020, IDER’s Berlin bacchanalia was, of course, brought to a premature end with the arrival of COVID-19. Left in limbo, uncertain as to whether they could return to the UK, the best friends’ situation was compounded when they both contracted coronavirus. “The whole thing felt surreal,” says Somerville. “We both had really bad fevers and were hallucinating. We had no idea when we could go home to London. The world was turned upside down.”

Yet IDER still managed to retain their creative focus. Lockdown life - for those initial few weeks in Berlin, and then upon their return to London – proved immensely productive for Somerville and Markwick. The lockdown-inspired “Saturday” (which the duo describes as their “transition single”), sparked a real flurry of creativity – one which culminates in the release of IDER’s keenly-awaited second LP, shame, arriving later this summer.

As Markwick alluded to earlier, it’s a collection of songs marked by a newfound sense of autonomy and ownership. Both in a business sense (it’s being released independently, with distribution from Believe) and, of course, from a musical perspective. All written, recorded and co-produced by the duo (with additional production from Salka Valsdóttir), shame builds upon their debut’s sleek synth-pop blueprint whilst adding layers of thunderclap percussion, tropical pop exuberance and dense, quixotic soundscapes.

“We felt we could be more experimental this time, especially with the production,” says Markwick. “I think that’s only natural, for a band to gradually grow into their sound and become more sure of their identity. When you’re making your debut, you can become focused on doing things the right way. This time, though, we felt free to go wherever we wanted. If something sounded right to us, we just went with it.”

IDER have been very much vindicated in trusting their own instincts. Much like their debut, it’s a record that rewards with repeated listens – especially in the lyrical department. At once intimate and expansive, these songs will resonate with anyone who’s ever felt cripplingly insecure in the first flushes of love (“Embarrassed”), is searching for purpose (new single “Cross Yourself”), or who’s struggled to reconcile with their youthful idealism (“Knocked Up”). 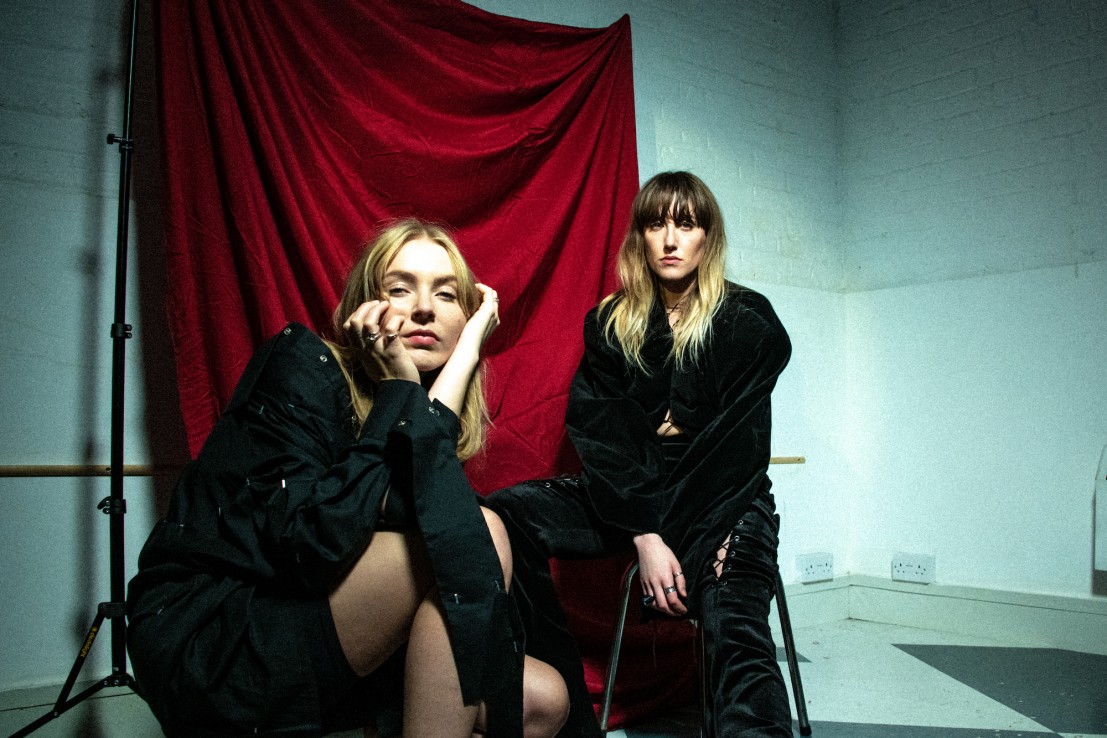 The most affecting track, however, surely belongs to album closer ‘Midlands Guilt’, an elegiac slow-burner that carefully picks over Somerville’s complicated relationship with her native Midlands. While there’s nothing new about musicians proclaiming their civic pride, ‘Midlands Guilt’ provides a clever twist upon that familiar theme; a song for all those who’ve fled the nest, chased their ambitions, but – in the process – perhaps sacrificed some of their regional identity.

“’Midlands Guilt’ is something I coined when we first started making music as IDER,” she explains. “Meg’s from north London, but I’m originally from Tamworth. So everyone in the press was calling us this ‘north London duo’. I just had this huge sweep of guilt that I wasn’t representing where I was coming from! It became a bit of a joke. I even had a word with our PR team about it. Writing ‘Midlands Guilt’ was kind of my way of addressing that guilt. It’s a classic moving away from home, growing up song. But still having a real soft spot for your roots.”

Upon its release, IDER described their debut Emotional Education as their “early adulthood record” – a snapshot of two young women on the precipice of adulthood, trying as best they could to make sense of their ever-changing internal and external worlds. As such, the music press often saddled the duo with the term ‘millennial angst’; however, this felt rather reductive given the acuity with which IDER tackled subjects such as mental health, identity and relationships. When the duo sang lyrics such as “We’re so afraid of failure, who created all the pressure?” (From the sublime ‘Swim’), they did so not with self-indulgent introspection, but rather with a warm, reassuring nod towards all those of their generation. It’s clear that IDER’s trust and emotional intimacy defines not only Somerville and Markwick’s rock-solid friendship, but also the connection the duo shares with their fanbase.

This desire to share, to unburden oneself with the people you trust most, is even more pronounced with IDER 2.0. With songs addressing the shame caused by relationships, the shame inculcated by belief in false idols, even the shame that comes from leaving your beloved Midlands - it was obvious, from an early stage, what IDER’s second album should be named.

" I think if we see people express their shame more – whether it’s through music or art or writing - we have to celebrate that."

“As we were writing the album, the theme of shame just came cropping up again and again,” explains Somerville. “I think about half the album has the word ‘shame’ in it. Thematically, we wanted to explore how shame can manifest, how it becomes even bigger if you keep silent about it. Shame has always been present; it’s such an innately human thing, especially for women in times when our voices weren’t heard. When women were denied a voice and not given a platform to speak about things that affected us. I think if we see people express their shame more – whether it’s through music or art or writing - we have to celebrate that. Shame thrives if we don’t let go of it.”

Markwick adds: “I think this album sounds more honest and rawer than our debut. That just comes from growing up and gaining more perspective.”

The subject of shame pops up again, inevitably, as the duo discuss their relationship with social media. Ambivalent about social media at the best of times (they’ve spoken candidly about its impact upon their mental health), Somerville and Markwick, over the past year of lockdown, had firmly cut back on their online activity.

“During the lockdown, we tried our best to cut down on social media,” says Somerville. “You poke your head in for a few minutes and it’s just incredibly overwhelming. I read something Matt Haig said about this, about how this constant bombardment of information is so unhealthy. It’s like there’s this enormous event in the media every day, ten times a day. He was asking how are we supposed to initiate change when we’re constantly being hit by new information, new traumas, 24 hours a day? I agree. It’s like we’re all in this constant state of adrenaline, and not in a real state, as humans, to create change. Last summer, when all the protests and online campaigns happened around Black Lives Matter, it did feel like a real change, like a genuine shift. But the fear is that something new can quite quickly take its space. How much long-term change can we make when the nature of social media is so fast, so based around our short attention spans?”

All this talk about the online world leads, inevitably, to IDER’s craving for the real world. It’s been well over a year since the duo played their last official live show, wrapping up their Emotional Education tour in Dublin. For all their reputation as a great recording outfit, a band that treat the studio as their musical playground, IDER have always been a most formidable live proposition. During the writing and recording of shame, it was the prospect of playing those songs live, when normality resumed, that really motivated the duo.

“We’re at the point where we’re becoming really bereft of live music,” says Somerville, as the prospect of proper gigs gets ever nearer. “Our last London show was at the start of February last year, at the Brixton Electric. We recently came across some live footage of that show and, I’ve got to admit, it really killed me. I just can’t imagine seeing people in front of us again, so close, in the same room as us. That whole experience of playing live seems so far away. Hopefully, it won’t be too long till we’re doing it again.”

When that magical moment finally comes, you can be sure that IDER – and their adoring audiences – won’t be suppressing their shame, nor any other feelings for that matter.

shame will be out this summer.