Goldfrapp are an unsung national treasure of a band. Into their fourteenth year of existence, they have quietly become stalwarts of British electronic music. Each album has come with a quiet metamorphosis, evolving constantly but with the resolute grace that makes up the sound that has kept them resolutely in the game since 1999.

When I ring Alison Goldfrapp, she’s sitting in a hotel room with one window, alone. It’s “austerely decadent” – adorned with purple and aubergine furnishings and wood panelling. The whole set up sounds bizarre and faintly unnerving, but she’s unphased. I’m assuming this sort of situation is de rigeur for her – used to lengthy interviews over a career that started when I was still in primary school. You can tell, just by listening to her voice and the way she pauses to formulate her sentences, that Alison Goldfrapp is in absolutely no hurry to do anything. In fact, she tells me so, when I remark how relaxed and un-pressured the making of album number 6, Tales of Us sounds:

“We had to be able to take our time and not feel pressured by anybody. Nobody produces anything good under pressure. It’s good to have deadlines, but if you feel rushed, and someone’s trying to rush you to finish things, it’s never really good”.

It sounds like the pre exam advice a mother of five would dole out. She speaks with the firm reassurance of a woman who knows what she’s doing, confident, no nonsense, and enviably well settled. Alison Goldfrapp is after all, 47, though to look at her (as I did, at length, on Google images before we spoke), you would never tell. But even with the music industry dominated by young women wearing outfits made quite literally of air, Goldfrapp has not decided to lean back on her wardrobe of circus gear and military get up, as she once did when performing albums number two and four. “I’m anti big outfits at the moment. I love clothes, I love fashion and I love design, but I’m into quite a simple look at the moment. I feel very comfortable with my age and and my look”. It’s a comment spoken like a woman who has seen middle age coming, and instead of shying away with bootcut jeans, has opened her arms and laughed all the way to the bank in a pair of fishnets. 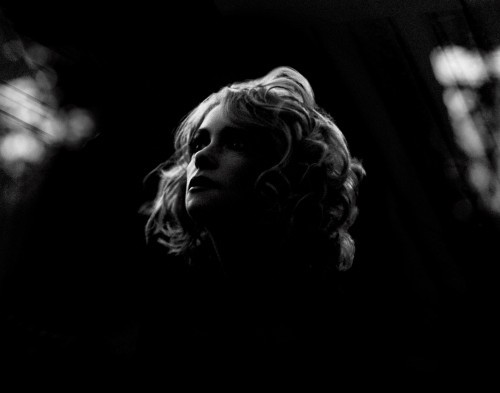 Goldfrapp is modest to the last about her outfit choices. “I don’t think they’ve always been great. I sometimes think ‘What the hell was I wearing?’ – but I suppose everybody thinks that. I had a few things I thought were a good idea at one point, but then I look back and think, Christ”. Anything in particular, I ask? “There were some thigh length boots that I wore at one point but now I look at them and think that is disgusting.” The comfort which which she speaks of her current situation, however, suggests that her satisfaction with the band’s new release has vanished any hint of self-doubt.

The favouring of simplicity transcends both wardrobe and the music Goldfrapp and Will Gregory make. The album, “Tales of Us” is dominated almost in its entirety by songs named for people. There’s a real sense of intimacy to it, but listening to tracks like “Drew” and “Annabel”, there’s a rich, expansive feel that really showcases the new dimension the band have embraced. It sounds incredibly different to the dance orientated feel of their most recent release, “Head First”. The orchestral elements are something Goldfrapp in particular seems incredibly proud of. “We’re about to go to New York to play the whole album with an orchestra,” she explains. “In my ideal world I’d love to do that all the time. The opportunity is a treat, it’s a wonderful thing to do to. It’s nice to be playing with so many musicians.”.

Though touring the new album will inevitably be a delight for those lucky enough to see the orchestral stage set up, Goldfrapp is aware of the potential implications this change in direction may have. “We probably lost some fans who think it’s a bit dull, but you can’t please everyone. Whenever we do a new album, for some people, it’s not going to rock their boat”. Forever positive, there comes a point in the conversation where I conclude to myself that I want Alison Goldfrapp to be my life mentor. Everything she says about herself and the music that she and Gregory make seems content, at ease and very ‘zen’, whatever that means. “We just get in a room together, play around, and talk. It’s the process of experimenting and discovery. Working on ideas, throwing things away and reworking things. It’s an evolving thing”. “Tales Of Us” is testament to the evolution of Goldfrapp the band and Goldfrapp the woman- fourteen years in and against even the vaguest odds, they hold their place as stalwarts in the highest vein of long-standing British acts.

Tales of Us is out now on Mute.