End of the Road isn’t just the most magical of the summer festivals, it’s also the most cannily-titled. Comfortably nesting in the final throes of the summer months, it represents the final field-based excursion not just for punters, but for many artists as well.

It’s a treasure clutched close to the hearts of anybody lucky to have ventured into the peacock-laden surroundings of North Dorset, and its positive aura feels infectious on both sides of the barrier. The artists we spoke to over the weekend’s festivities unanimously declared their love of the festival, and Scott Hutchinson, frontman of Frightened Rabbit, was no exception.

For a band as tirelessly hard-working as this now near-decade old five-piece, festival season is no relaxed proposition. Having arrived at the festival after a lengthy journey the previous night, Hutchinson admits through his broad grin to have “not been awake for that long”, despite the afternoon hour. Their pre-headline Sunday night slot, and penultimate show of the weekend, marks both their second visit to Larmer Tree Gardens, having played in 2006, the year of the festival’s inception and the band’s final festival show of 2013.

Their long-overdue return follows a show at Reading and Leeds, which Hutchinson will later call on stage a festival that “really, really wanted to make me quit my fucking job”. The enveloping maturity, wonderful attention to detail and immense personal investment that characterises End of the Road clearly makes it a better fit for the howling emotional poignancy of Frightened Rabbit’s warm, oaked miserabilia.

There are so many different elements that combine to make this festival what it is. The music is a key part of that, but there is another focus here too, of the ale variety. With a broad range of over 50 different ales on offer, that take five pages of the festival’s programme to describe, End of the Road’s studiously curated musical line-up comes with a bespoke selection of beer to enjoy it with. We imagined Frightened Rabbit to be no strangers to the odd tipple, so under the lucid guise of “interview”, we couldn’t resist the chance to combine two institutions close to our hearts, and treat ourselves to an ale tasting. Who would be a better fit for a festival drinking companion?

Under the guidance of beer-guru Christopher Corry – the man from The Really Good Bar Co responsible for bringing ales to the festival since 2009 – we learned about the process behind “curating” (apparently not the technical term) the selection that accounts for 65% of the festival’s liquid consumption, the change in drinking habits in young people that make such a focus sustainable, and the rude health that the local brewing industry currently sits in. In amongst the easy-drinking, fruity feel of house ale “End of the Road” (specially brewed by Marston’s), the sweet, summery “Funky Monkey”, and the more-ish “Zig-Zag” porter, we even managed a few on-topic questions. 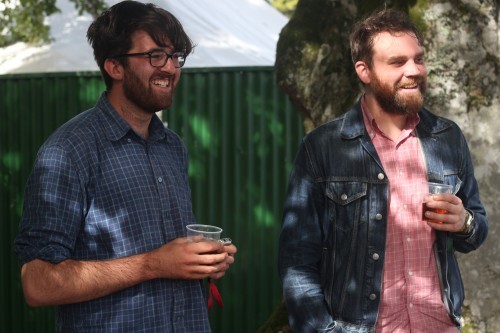 Cheers! Or what do you say in Scotland?

What’s your opinion on the developing attitude towards ale-drinking?

I think it’s a better way to drink. I don’t know what lager does, but it does something, to men particularly, and I don’t know if it’s necessarily a good thing. This instills a slightly different attitude in you than fucking Stella. It’s good to be aware of its stuffy past, that it’s an old man drink. I know a few universities in Scotland who are doing brewery courses now, and it’s encouraging!

I read you used to work in a whiskey shop?

I did – whiskey, fine wine and world beers. That was the last job I had before Frightened Rabbit. When I started off, I’d always been against being a “drinks wanker” – but very quickly got right into it. You had to, because I had to know all about this stuff – but started to realise how to detect all these subtleties. Before, I was just a lager drinker, and that changed my habits a lot. It didn’t make me drink less…but it made me drink better!

Do you have a favourite Scotch? Is that an impossible question?

It’s not, and I do! It’s called Balvenie. They have the DoubleWood, and that’s my favourite. You can actually get it in supermarkets now, but it’s just the easiest, sweetest, loveliest drink. I can only go so far into the peaty numbers – Laphroaig, stuff like that – but that one just tastes like Christmas pudding to me. I always have a bottle in the house.

What’s the one Frightened Rabbit song that couldn’t have been written without booze?

I’d say, fucking lots of them. I think definitely “Keep Yourself Warm” has a lot to do with booze. It’s not actually about me – it’s about a couple of flatmates. One of whom was a prolific fucker, and one who was not a prolific fucker, and he would get drunk and stay in his room all day. It definitely speaks to Scotland and England’s attitudes towards booze – it seems essential for you to drink to screw. So it’s not putting it in a good light really.

Do you have any regular Frightened Rabbit drinking songs?

Anything by The Band. ‘Rag Mama Rag’ was a big one for me and my brother when we were starting the band – it’s a real late night piano song. Though we were drinking shit whiskey at that point…

What are your thoughts ahead of tonight’s show?

I can’t wait. The last time we were here was the first time it was ever put on, and we were struck by the same kind of ethos then as we are now. It was one of our first festivals, and it was like going as punters really. We were struck by how friendly, and lovely everything is. This is how things should be – it’s not that hard! I’m not quite sure what we did to not be invited back till now…

Will you get to stick around to see much of the festival tonight?

I’m going back tonight, unfortunately! I fly to America tomorrow, to have a few days off before our tour over there, but a couple of the guys have been here all weekend. They’re looking pretty rough.

What’s the personal connection between you and Belle & Sebastian, above the obvious Scottish one?

We actually go furthest back with the drummer. He was on tour with Snow Patrol and had a house on the east coast of Scotland, up in Fife, and I said to him – “Man, I need somewhere to write, d’you mind if I have it?” ‘Cause I’d helped a friend do some refurbishments on it, sorting out his bathroom and that, and he said – “Fuck it, take it! You’ve done all this work for me, so have it as long as you want!” So I stayed at his house for about two months on my own. This was writing the album before last, so it was about 2009. I was there for about two months, going slightly mad, but I wrote most of the record at Richard’s house. We’ve known them in bits and pieces for ages.

And they invited you to play with them at ATP in 2010?

They did! Fuck, I forgot all about that. That was my first and only time at ATP, another great event. They’ve been good to us. They’re kind of like the forefathers. Stuart Murdoch’s a national treasure! He did a lot for Scottish music internationally. I always get asked – “how have we managed to find success in America?” – and a great deal of that is kind of following in the footsteps of Mogwai, Teenage Fanclub and them, who introduced Scottish music to that market. Everywhere you go, they’re kind of…omnipresent.

And with a final cider-brewing tip for Scott’s brother and bandmate Grant from Chris (freeze some of the apple juice after you’ve first pressed it, and re-introduce it at the very end), we head to the festival’s forest disco to the eager throng of fans who have gathered around the whisper of a secret set from Scott. Taking to the stern of the upturned boat in one of the forest’s clearings (see it to believe it), the frontman plays a career-wide selection of cuts in front of an enraptured, adoring crowd, before moving right into the middle of the audience to stand inches from those reverently mouthing every syllable. It’s one of the most special, intimate moments of the festival, and for a height-fearing man who’s allegedly never been in a boat before, an impressive feat.