I remember discovering Norway’s Casiokids a couple of years ago when a friend kindly added their computer-generated funk-rave-riot ‘Fot I Hose’ to a mixtape gift. After falling off my chair with excitement I wondered, “Why are these guys not international super heroes?” This initial enthusiasm was duly reinforced by a Casiokids gig that frothed with enough fizz and pop to power every Soda Stream machine ever invented. But, the thing with Bergen’s best kept secret is, that they haven’t quite managed to translate the energy of their unstoppably uplifting and stupendously fun live shows and singles to the long player format. Yet.

While singles such as ‘Fot I hose’ and ‘Finn Bikkjen’ have deservedly been showered with adoration on music blog Song Of The Day-type features and have no doubt made it on to many mixtapes besides mine, Casiokids’ past two albums, 2006’s Fück MIDI! and 2010’s Topp Stemning På Lokal Bar have somehow not quite hit the same spot. So, as the band release their third studio record, the interestingly titled Aabenbaringen Over Aaskammen (archaic Danish-Norwegian meaning “the revelation over the mountain ridge”), the question I’m dying to ask is, ‘how does it compare to previous Casiokids’ releases?’

“For me the production sounds richer,” says band member Ketil Kinden Endresen on the eve of the LP’s release. “It’s a natural development as all of us are more used to recording and more eager to find possibilities with the equipment we’ve gathered (stolen) over the years. Fück MIDI! was done mainly in (fellow Casiokid) Fredrik’s father’s office in Stavanger; Topp Stemning På Lokal Bar in an old cantina and the hallway of the Bergen Jazz Association. On this record we wanted to sit in our little grotto at Bergen Kjøtt (Bergen Meat) studio and dig a bit deeper and experiment more with production possibilities.”

Aabenbaringen Over Aaskammen is a musical ode to the tale of Dr Tarzan Monsoon and his discovery of a hidden rainforest, says Ketil, with the song themes and sounds inspired by the story. The old-fashioned script used in the LP’s title may have a hint of a hundred years ago, in Norwegian grammatical terms, he adds, but the band’s sound remains firmly within the contemporary “lo-fi electro” genre.

“Even though we’ve become more interested in production possibilities, we still want to retain the rawness of the first two records. The dulcet tones of the Casio will always be at the core of our manifesto,” reveals Ketil. “Casio for us is mostly about nostalgia for the 80s keyboard, the only instrument that can play all instruments, and for many our age also the first instrument we ever owned.”

It’s this penchant for the popular synthesizer – the very same model used with shoulder-padded attitude by 90s rap sensations Salt-n-Pepa on their phenomenally popular hit single ‘Push It’ – along with a healthy appreciation of some of pop music’s finer moments that make Casiokids so irresistible, yet at the same time, undeliberately cool.

“We’re trying to make music that is somewhere between ABBA, Technotronic and Whigfield, yet fail,” explains Ketil. Suddenly, it all starts making sense: combined with the less mainstream influences Ketil cites, such as Fela Kuti, Arthur Russell, Ivor Cutler, John Coltrane, Sun Ra and Bjørn Torske, the Bergan-based collective have mastered the art of blending electronic wizardry with plenty of fun. And it is undoubtedly this which makes every Casiokids gig bounce. And I mean bounce. Their short slot at 2009’s achingly cool Stag and Dagger festival in London stripped the paint of the painfully fashionable veneer of the Hoxton Bar and Grill and had its crowd grinning from ear to electronically stimulated ear. Pretty much every live review is packed with similarly exuberant adjectives and glowing praise. These ‘kids clearly know how to connect with their fans, despite singing almost all of their songs in their native Norwegian tongue. 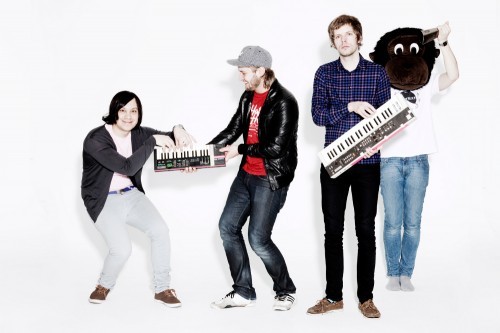 “I think our crowds are quite similar in many ways around the world, whether we play in the US or in Belgium, Norway or Australia,” says Ketil, on the language barrier. “I think other factors apart from nationality play a bigger part, such as time of day, nutrition and bad conscience due to tax fraud.”

He adds: “In the beginning we actually decided not to sing, and only used human voices sampled from audio books and interviews we did ourselves. As we experimented more with vocal harmonies in the studio we decided to follow the idea of making something as true to our everyday lives and personal experiences as possible, hence using the Norwegian language.”

It is perhaps Casiokids strong visual presence that helps them circumvent language barriers. When the band started out in 2004, Ketil remembers fellow electronic acts struggling to match their music with a stage presence and says this prompted him to think harder about Casiokids’ own live shows.

“Most of these electronic artists were quite simply sitting still behind their laptop during their live set,” he explains. “I enjoyed the music very much, but the visual part could not have been duller. So, when we got enough songs for Casiokids to play live I had some meetings with Aslak Helgesen (leader of Digitalteateret) and Petri Henriksson (our designer Blank Blank) to work out how to present our music in a more exciting way, still using the sounds that we’ve come to love from electronic musicians and with computers on stage.”

For their first show Casiokids created a jungle in the venue (Landmark in Bergen). “Petri put together a video that we had made from loads of safari films,” explains Ketil. “And every gig after that would have a special theme, trying to engage audience, and also to mix the electronic element with improvised live playing.” These “visual live shows” eventually evolved to include a shadow puppet theatre on stage and live data visuals on a screen.

“During this time we developed very much as a band and after a couple of years we started to do more visually stripped down shows and now in 2012 the two live settings are for us, more separated,” explains Ketil. “When we do concerts as a band we try to add just the right amount of visual imagery and give more of ourselves on stage.” And, as anyone lucky enough to have caught one of these performances will know, it’s a balance that Casiokids have perfected.

Aabenbaringen Over Aaskammen is available now through Moshi Moshi, and the band can be caught live in the UK at the following dates: