Ahead of the London show tonight, Best Fit headed to Helsinki to watch Husky Rescue put on one of the most extraordinary shows of the year.

I hadn’t realised how far east we were. A few millimetres right on the map and you’re in St Petersburg – a ferry crossing that apparently takes little more than an hour.

And it shows. Helsinki is an extraordinary architectural miscellany; a mortise of Scandinavia into which has been inserted a Russian tenon. The city’s main train station is a Soviet heroic monolith, square-faced and brick, with elongated combatants keeping guard at the entrance. The Russian influence pervades, with proto-Stalinist statuary sitting metres from Orthodox Church-esque constructions. At the same time, though, the city is delightfully bleak, its flat-fronted concrete apartment blocks seemingly embarrassed by the capital’s occasional architectural exuberances. It’s a city that seems to be acutely conscious of its ancestry, but which is trying to play it down.

Inside Husky Rescue’s studio, though, things are different. Set in the basement of a Parisian-looking apartment building, clad in yellow and blue, the warren-like complex feels like the most comfortable panic bunker imaginable. Behind a garage door, neatly adorned with a ‘60s postbox bearing the studio’s name, is the concrete embodiment of an interior design Tumblr. Jazz standards play on a chestnut record player in the reception room, while pastry smells wend their way from the small adjacent kitchen. Everything is just so; the coffee machine is expensively elegant, and the cabinet TV is almost certainly there for decoration rather than watching. It is all acutely well designed, and achingly Scandinavian; the sort of place in which Acne jackets are delicately flung about and Moleskine notebooks are used as coasters.

“It would be great to get some plate reverbs, some big stuff,” says Husky frontman Marko Nyberg. “But it’s just not practical.” Nyberg is sat on a sofa against the wall of the studio’s control room, surrounded by neatly arranged racks of analogue outboard. From the side of the mixer he is winked at by what looks like a piece of modular synthesiser. An adjacent room is virtually inaccessible, such is the volume of keyboards, scuffed guitar pedals, and microphones in various stages of deconstruction. He’s not short of gear.

The previous night, Husky Rescue played their final Finnish show of the year. It wasn’t a ‘gig’, a word that connotes black box rooms and slapdashery. Instead, the performance operated at the interstices between music and visual art, between theatre and installation. On a square white stage in the middle of a tram museum, Husky Rescue conjured a world that consisted in equal parts of children’s fairytales and myths of the occult; a world that was preoccupied with sleep, and with the feelings and phenomena that we experience only when we are on sleep’s boundary.

From the high roof of the venue was suspended a garden swing, of the sort that one might expect to find in a Susan Coolidge book. Around it hung huge leaves, splashed in pastel colour, to which were attached bare light bulbs gently pulsating. In one corner, two violinists played to a room so hushed that microphones seemed unnecessary. In another, on the swing, vocalist Johanna Kalen, clad in a floor-length dress pitched somewhere between Wee Willie Winkie and Pocahontas, intoned lullabies in a manner that suggested she could have been there since the beginning of time itself, the audience having simply wandered into a dream world entirely of her construction. 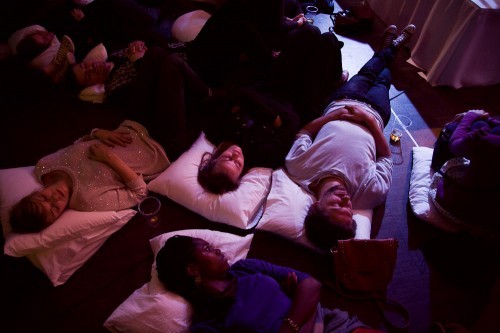 The audience, in fact, might well have done. Positioned on the floor on four sides of the stage, and equipped with pillows, the crowd were invited into this world of multicoloured somnabula. Many chose to lie down, such that the room looked, from a distance, like a huge map of intersecting legs punctured by a stark white island of oddness. From that island emanated a gradually evolving wave of sub-bass atmospherics, within which were subsumed buzzsaw synths and delicate vocal filigree. The disorienting effect was one of separateness, or otherness; a sense that you had found yourself in an idyllic domain of pastel-burst beauty, in which unpleasantness, in whatever form, simply did not exist.

This rethinking of the relationship between audience and performer was the evening’s signal quality, and it is something to which the band are well attuned. “That’s something we’ve been growing into,” Nyberg suggests. “It’s great to do something like this, but obviously it’s not possible every time. It’s not that often as an indie band that you have the opportunity to set up the show the day before. It started the day before at 9AM, but still we were in a hurry.”

“The beautiful thing about audiences,” multi-instrumentalist Antony Bentley says, “is that however much you have a concept of what you want to happen, there’s still actually no control. So whatever you plan, it’s a complete surprise.”

Nyberg agrees. “For me it was a surprise that people were so actively taking part. I thought that it might be harder to get people to sleep. It wasn’t spectacular in the sense of booming and fireworks, but it’s trying to touch some sort of trigger point in people in a quieter way.”

The previous night another Helsinki resident had told me that Husky’s oddly somnambulist form of audience participation was uniquely attractive to Finns – who, he said, tend not to be given to demonstrative shows of emotion. It’s a description that Nyberg recognises. “The most annoying thing for a Finn is when they’re going to see a theatre performance, and you’re going to be part of it. Oh shit. So the combination of a pillow and sleeping, that’s fine, you can just pretend that you’re sleeping.”

And yet the set is more demanding than that description suggests. The audience might experience it from a sedentary position, but the world still requires an active suspension of disbelief. On the surface, at least, it would seem that some effort is required in order to effectively insert yourself into this pastel-coloured forest, full of woodblock print and nymph dresses. It is a testament to the quality of the production, and to the manner in which it is delivered, full-hearted but never over-earnest, that in fact it feels like the relationship is inverted. Rather than straining to believe, actively trying to find a place for themselves in this uncanny world, the audience find themselves quickly swaddled, the world encasing them from the outside. The crowd might be surrounding the band but it is the band that ultimately wraps the crowd, gently buffeting them on waves of soft, bittersweet melancholy.

The Deep Forest Green EP is out on El Camino on 17 December.