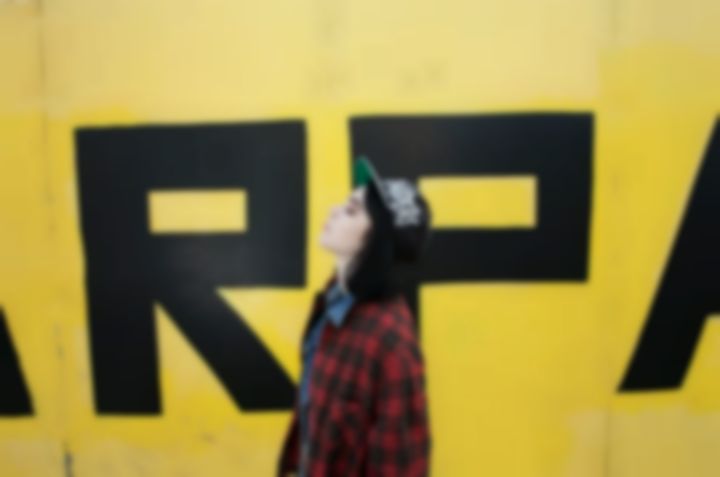 Admittedly, of all the coffee-brewing establishments London’s Fitzrovia has to offer, taking Swedish singer-songwriter, Beatrice Eli, to Scandinavian Kitchen for our interview is hardly going to win the Genius Decision of the Year Award. After all, you wouldn’t take a visiting Italian out for a pizza, would you?

My ridiculous choice of venue notwithstanding, it does prompt Eli to confirm that the food available at the Nordic emporium indeed looks “like real Swedish food” and with this verbal certification of authenticity, we proceed to shelter from London’s renewed efforts at snowing. Dressed in black, Eli is donning a Croydon facelift, and somehow makes it work and look cool. She is, at all times, smiley, attentive and doesn’t shy away from eye contact. This may have something to do with the fact that she is very excited to be talking about her new music, which is finally seeing the light of day in the UK, following a soft release in her native Sweden.

The EP she is about to unleash here, It’s Over, is a ‘no fillers, no shit’ endeavour, containing four diverse and bravo-worthy tracks. Last year’s buzz maker, ‘The Conqueror’, is on it as well as three new potential greatest hits.

We start off by talking about when she first started making music. “After I quit high school – is it high school here when you’re 19?”, she asks, but we don’t dwell on the intricacies of Sixth Form. “I’d been to music school in Stockholm”, she continues, “and I didn’t have a band or play the guitar or the piano at the time but I wanted to make music. So I just bought this little home studio type of thing and started learning to produce. I just wanted to make my own music so I took some time to work on that and especially work on the beats. The beats are really important to me. I don’t want stuff to pass by unnoticed, I like weird and dramatic sounds”. The next step was putting some of her home recordings up on Myspace. “An A&R guy in the UK found me on Myspace”, she says, “and I started working with EMI in Sweden and with professional producers. I co-produced a lot of the demos”.

At music school Eli mainly studied soul singing. “I learned to play the guitar a bit too but not very well”, she giggles. I ask whether she found music school to be beneficial. She takes a moment to think about this and then shakes her head. “Not really, to be honest,” she says. “After school I realised that the technique I was taught really messed up my voice. I don’t know if I was doing it wrong or something but it really hurt my voice. And I think what got me to sing better and write better and perform better was just me being in the studio all the time and just singing and working on it. But I guess at least I had the chance to do something that I was interested in studying”.

‘The Conqueror’ came to Eli a couple of years ago. “I wrote it on the piano”, she says. “This made it very open in terms of what we could do with the song and, at the time, I just got into the UK sound and I was really inspired by dubstep and grime and all that and I wanted to do my own take on it”. The idea behind ‘The Conqueror’ came from wanting to be that someone special in another person’s life but “it doesn’t have to be about you actually loving that person that much, you know”, she clarifies. “It’s an ego thing. That’s a common theme with me and my friends – like, oh, I don’t like him or her anymore, we’ve broken up and I don’t want to be with that person anymore but I actually still want to have some sort of effect on them. I don’t want to see that person with someone else. This kind of ugly thing within us that a lot of people have and that I’ve experienced myself”.

I put it to her that this admission is rather honest. Does she not mind being so open, especially on her very first release? “That’s the only way for me to write”, she says. “So there are songs on the album that are beyond ‘The Conqueror’ in that respect. I guess it’s a good thing for me to get that one out there first as a taster of what’s coming because it’s going to be a personal experience. Also, I guess you have your own feeling when you write something but then when other people listen to it they might not see it in the same way you did when you were writing it. So, a lot of people thought it was a song about heartache but for me it was about ownership”.

Whilst ‘The Conqueror’ was only intended as an introductory hype-creator and was not, until now, made available for legal procurement over here, Eli made an initial promotional push in the UK last year and enjoyed very favourable blog murmurings. Throughout our conversation you get a real sense of Eli being an anglophile. She mentions her love of London often. “I’d absolutely love to be able to work in the UK”, she says. “It’s very close to home and the culture is quite similar. I adore London and I think the music that comes from here is really, really good. So to be able to have a little space of mine here in the music world would be amazing”. Eli previously lived in London for a month and cherished that experience. “I didn’t wanna go back to Stockholm”, she exclaims. For her it’s all about the vibe and the tempo of the city, she tells me. “It’s just very energetic and for someone who is in the music business, there’s a lot of people to work with, a lot of creative people. Also, I know you guys don’t think the weather here is good but if you compare it to Sweden, trust me – it’s good”, she laughs.

We move on to discuss her new single and the title track of the EP, ‘It’s Over’. Where ‘The Conqueror’ had a ballady essence to it, ‘It’s Over’ swallows a dextrose tablet and instantly turns on the sass. The song was started off by Astma & Rocwell of Swedish band (and Best Fit Recordings family members) NONONO, who also co-wrote and produced ‘The Conqueror’. “I was just like, wow I love this track. I love the vibe of it. I had a couple of lines that I had written on my phone a couple of days before and they just fit perfectly on their track. We recorded it the next day and there it was. It fit. I tend to instinctively go for ballads so it was really refreshing to have something that was much more upbeat”.