Richard Swift is back this month with a new album under the alias of Instruments of Science and Technolgy. Music From Films Of R/Swift is a collection of instrumental pieces he wrote for, you guessed it, his very own short films. A million miles away from the perfectly crafted pop songs on last years Dressed Up For The Letdown, we caught up with Richard a few weeks ago to find out about the inspiration behind the recordings, and whats next for him in 2008.

Hi Richard, Happy New Year to you and congratulations on the new record. It’s certainly a departure from Dressed Up For The Letdown… How long have these particular recordings been in the pipeline?
Well, i actually finished this record before “Dressed Up” i believe…so it’s been kicking around for about 3 years now. Oh, and Happy New Year to you as well.

To us in the UK, listening to the new album brings to mind the incidental music composed by Delia Derbyshire and the BBC Radiophonic Workshop. Are you familiar with Derbyshire and her work and was this an influence?
I am, and yes, she’s been a HUGE influence. I watched a lot of “Dr. Who” as a child. Part of what drew me into the program was the psychedelic intro and the left-of-center theme music. Later, a friend turned me onto “An Electric Storm” by the White Noise…

Are you more comfortable working with electronics or with a more conventional “rock” outfit?
I view them the same, although, i grow tired of hearing my singing voice, so for right now i’ll say electronic music seems more freeing…or more open ended.

What equipment did you use when constructing the pieces found on the album?
Drums, Synthesizers, a 4-track tape recorder, and a bubbler.

Would you say that part of the appeal of short film-making is the knowledge that you will be ultimately scoring your own movies?
Indeed. The “films” i make are very open to interpretation, much like the INST music. 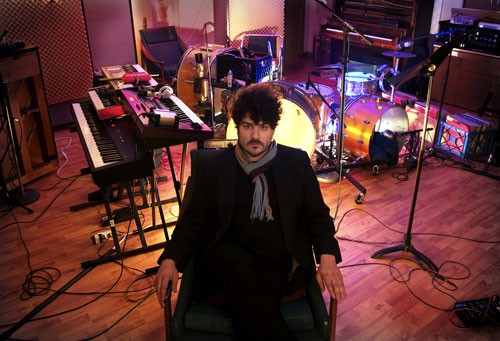 When your films are being developed, do you have ideas for music during the planning stage, or is it not until the film is completed that you set about creating the music?
Well, i do 2 different things. 1/ I’ll finish a movie, then try to match the tone musically or 2/ I’ll finish a piece of music and build a film piece around it. But lately, i’ve been taking manipulated sounds from manipulated videos and building music around that.

Why do you feel the need to use aliases for much of your work?
I don’t know really. There’s NO WAY i could release INST as Richard Swift and have it make any sense. To be honest, I don’t know if i’m fighting or creating confusion. I’m not the first musician to do this… Prince and Richard James (Aphex Twin) write and record under different aliases all the time. It’s no different than being call “Richard Swift” on stage, and then being called “Daddy” as soon as I get home. It’s something I’ve always done and will probably continue to do.

Are you planning to do any live shows in support of the record?
Yes, I am. Just not sure how and when.

We’ve read that during your recent US tour with Wilco, Jeff Tweedy invited you to do some recording at their Loft studios in Chicago. How did those sessions go?
Amazing. I don’t think there’s a musician living that i respect more than Jeff… he’s been incredibly encouraging to me… the entire Wilco camp has been. I recorded about 7 songs there, most of which should end up on my next “proper” record. And some of the Wilco boys made guest appearances. I may be going back this month to record a bit more.

What do you make of the current trend of bands giving their music away for free a la Radiohead and Nine Inch Nails… The ongoing digital revolution seems to have turned the industry on its head. Other artists we’ve spoken to recently seem to see it as a positive thing. A two finger salute to major labels everywhere. What are your thoughts?
Well, it’s not a trend i don’t think. Bands have been doing this for quite a while, just not at this level. I think it’s fine for bigger bands, but a band just starting out could never do it and survive. If anything, I like that it’s shaken the majors and caused people to think outside of box a bit… not too much, but a bit. I’m more excited about their (Radioheads) webcasts than the free-record thing.

And finally, outside of making this album, what books, films and albums have you been reading, watching and listening to? Anything to recommend to our readers?
READING: “Queer” by William Burroughs “A Vision” by WB Yeats
LISTENING: Bunker Hill, Howlin Wolf, The Tremolons, Link Wray, Dr. Alimantado, The Jive Bombers, Half Japanese, Gang Starr
WATCHING: Joe versus the Volcano

mp3:> Richard Swift – Kisses For The Misses
mp3:> Instruments of Science and Technology – Shooting A Rhino Between The Shoulders