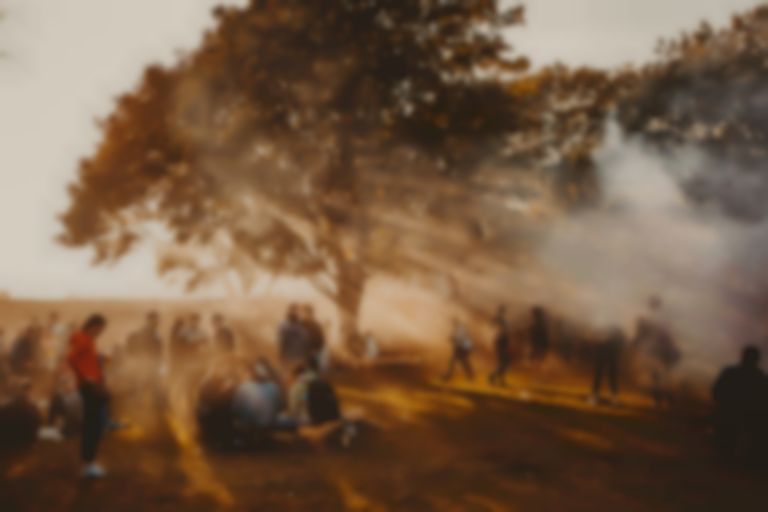 The 47th edition of the non-profit festival showcased a host of Nordic acts alongside global big-hitters. We give you the lowdown on how we survived and who we caught this year.

Roskilde's lineup is typically very diverse, proven yet again this year with 183 acts of countless genres appearing across 9 stages all-in-all. Foo Fighters, Arcade Fire, Royal Blood and Father John Misty gave crowds at the iconic Orange Stage their fundamental arm-swaying mass festival sing-a-longs. Lorde, The Weeknd and Solange injected some polished pop into the weekend while Young M.A, Gucci Mane, Princess Nokia and Ice Cube represented intergenerational rap. As would be expected, Roskilde always has a strong showcase of Nordic acts (almost 40% of all acts, in fact), with Sigrid and Icona Pop drawing huge crowds, as well as home-grown Danish talent in the form of Emil Stabil and Trentemøller.

How does Roskilde Festival work?

Early every summer, the small harbour city of Roskilde plays host to a non-profit, carbon-conscious, community-focused festival. The population of the festival - 130,000 - would make it the fourth largest city in Denmark for the eight day event. The 'core' festival events take place across the latter part of the week from Wednesday evening to Saturday night, with the first half of the festival showcasing rising stars, newcomers and DJ sets across three of its smaller stages. Acts start from midday and last until past 3am. 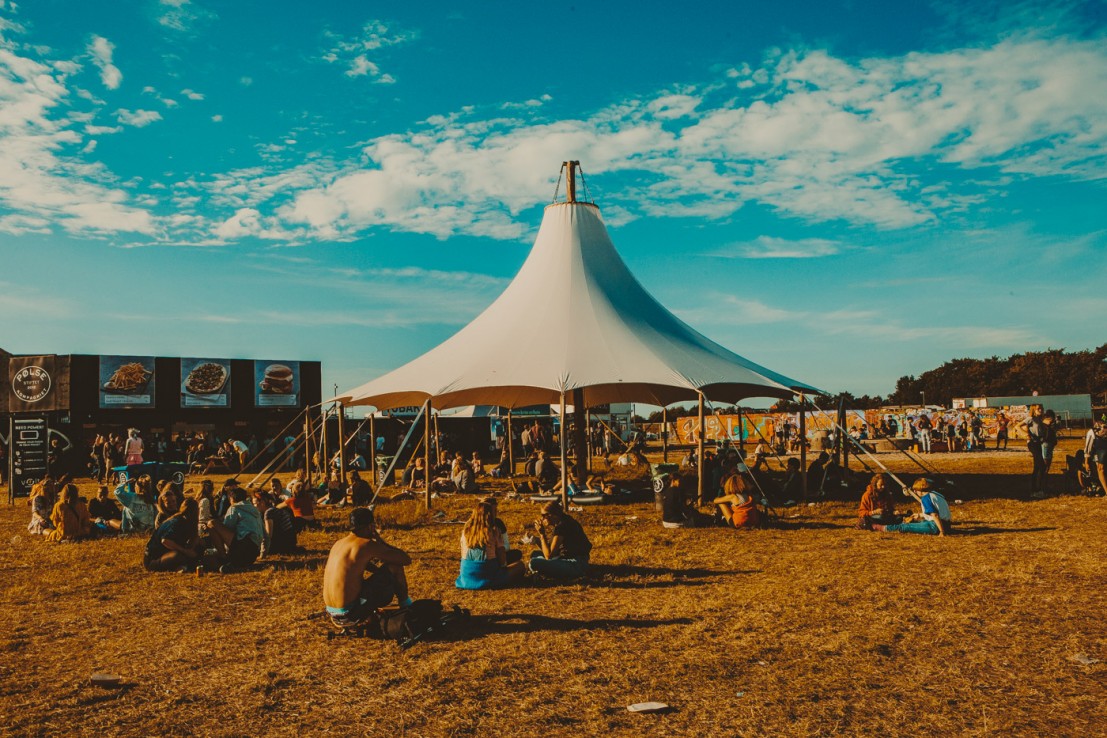 Getting around at Roskilde

The festival site is a huge 80 hectares - think a slightly smaller Glastonbury - so don your wellies and get ready for a fair bit of walking. It's just south of the centre of the harbour city of Roskilde, so shops, museums, public transport and general civilisation are close by. Not that you'll need to leave the festival site: it's essentially a small city with a pharmacy, library, supermarket, laundromat and pretty much everything else you'll need. The official Roskilde Festival app means you'll always have a map and showtimes at hand, and notifies you of any last-minute stage or time changes.

Being a tourist in Denmark

You'll no doubt be travelling through Copenhagen on your route to and from Roskilde, which offers the perfect opportunity to explore the city's world-renowned new Nordic cuisine, stunning royal palaces, Lego-esque Nyhavn port, freetown Christiania and Danish design boutiques. If you're in a fragile post-festival haze and just need some good hygge, you can still low-key immerse yourself in Copenhagen's culture by weighing in on various smørrebrød toppings and some innovative hair-of-the-dog Mikkeller beers. Oh, and the Little Mermaid statue is possibly one of the most overrated tourist attractions in Europe. 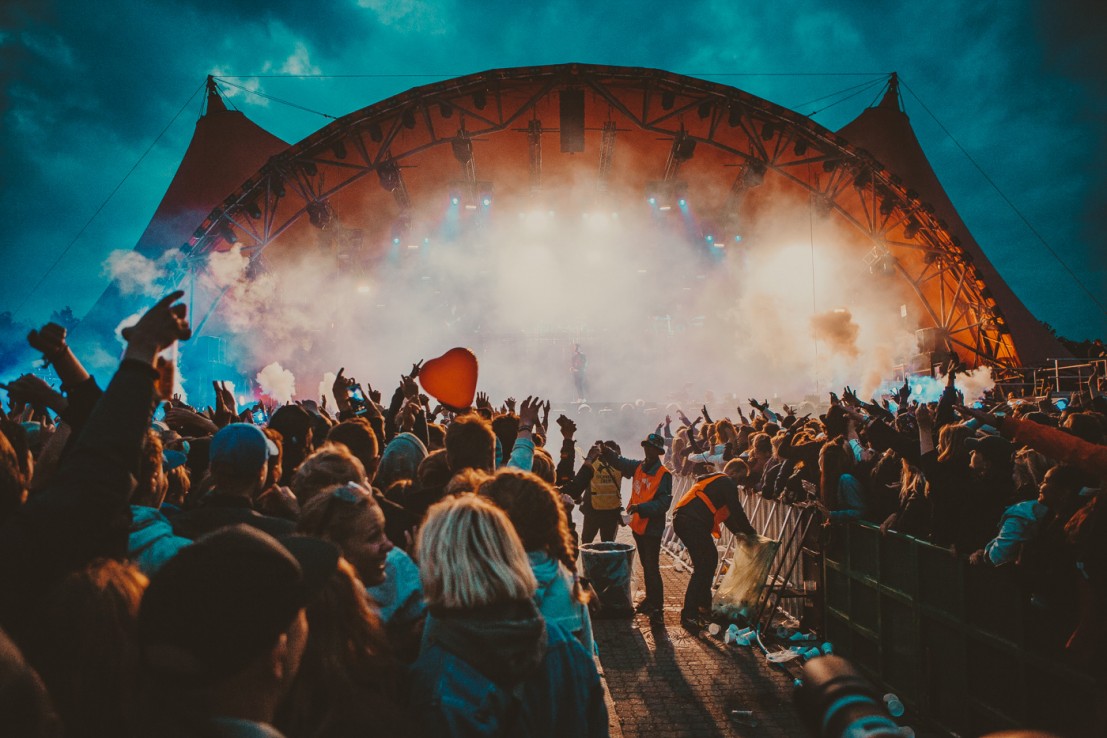 The food at Roskilde

This year, the 145 food stalls on site used over 90% organic produce. While this is quite amazing to us Brits, Copenhageners are slightly more accustomed to organic food as the norm, as it makes up three quarters of the food served in the city's public institutions. The buzz of the festival's food scene this year was the Crick'it stand: the brainchild of Danish food entrepreneurs who see high-protein, near-carbon-neutral bugs as the future of eco-friendly nutrition. Cricket pesto, moth larvae mayo and 15 cricket lemonade (does what it says on the tin) were on the menu for the festival's notoriously open-minded punters. Gorm's freshly baked gourmet pizza, burritos, Thai street food, falafel plates and so many other world cuisines were on offer for those who prefer their food fly-free.

Our tips for suriving at Roskilde in 2018

The campsites are the best places to find a party after the live music stops (or any time really!), and Dream City encapsulates the festival's renowned 'orange feeling'. It's where festival-goers create themed camp communities and neighbourhoods with unique activities such as Quidditch tournaments at Camp Harry Potter, glitter wrestling at the LGBTQ Unicorny Camp, and a hog roast at the Amish camp. There's also the hugely popular annual naked race around Dream City on Saturday every year which is absolutely worth a watch. Elsewhere, the Art Zone is where international artists create and display their work, Rising City hosts engaging talks and events, the new KlubRÅ area holds secret DJ sets, and you can watch or partake in some basketball, skateboarding or BMXing at Street City. Oh, and the Danish are among the tallest people in the world, so if you're vertically challenged, make sure you make it early to your favourite sets to secure a good spot. 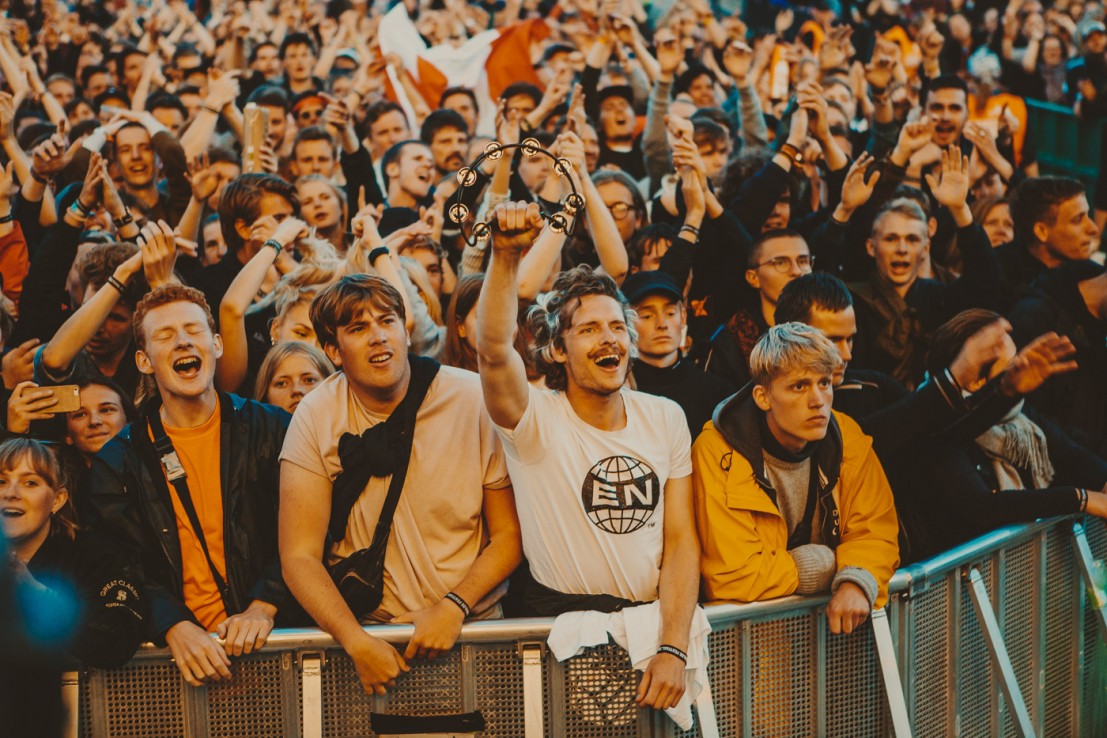 There's no beating about the bush - Denmark is pricey. It isn't on the euro, but the krone (crown). Roskilde Festival was cashless this year, with all stalls instead accepting plastic or the festival's cash card system, where cash is loaded onto a contactless card and topped up when needed. This is an absolute blessing if you get a fee every time you use your bank card in a foreign country, and means no waiting in ATM queues or coins weighing you down for the whole festival. It's possible to eat for cheap at Roskilde too: some food stands offer filling meals for 50 krone (about £6), but if you're on a tight budget it's a good idea to bring some of your own snacks and booze. Volunteering at Roskilde is a sociable and cost-effective way to go on a shoestring. The 32,000 volunteers each year are hugely valued and are at the heart of the whole festival's operation, and get a free ticket in return for a few shifts.

How do I get to Roskilde Festival?

Roskilde is handily just 20 miles west of Copenhagen, which is unsurprisingly really easy and quite cheap to fly to from many cities around the UK and around the world. From the airport it's just a quick train to the centre of Copenhagen, another to the city of Roskilde, then you have a choice of either the frequent shuttlebuses or a train to take you straight to the site. There'll be plenty of orange-clad volunteers around at Roskilde station to ask for help. In general, if you get lost or you're unsure, the festival and its location is really well-known around Copenhagen. Pretty much everyone in Denmark speaks incredibly good English and typically are really nice people, so ask away.

Where can I stay at Roskilde Festival?

The festival has a lot of space for campers, and camping is included in the full ticket. You can choose where you lay your tent depending on the vibe you want: from 'silent and clean' camping for a good night's sleep, to the party epicentre of Dream City. Roskilde also offers pre-pitched tents for an extra fee if you're travelling far and don't want the faff of bringing a tent.

Who we saw this year 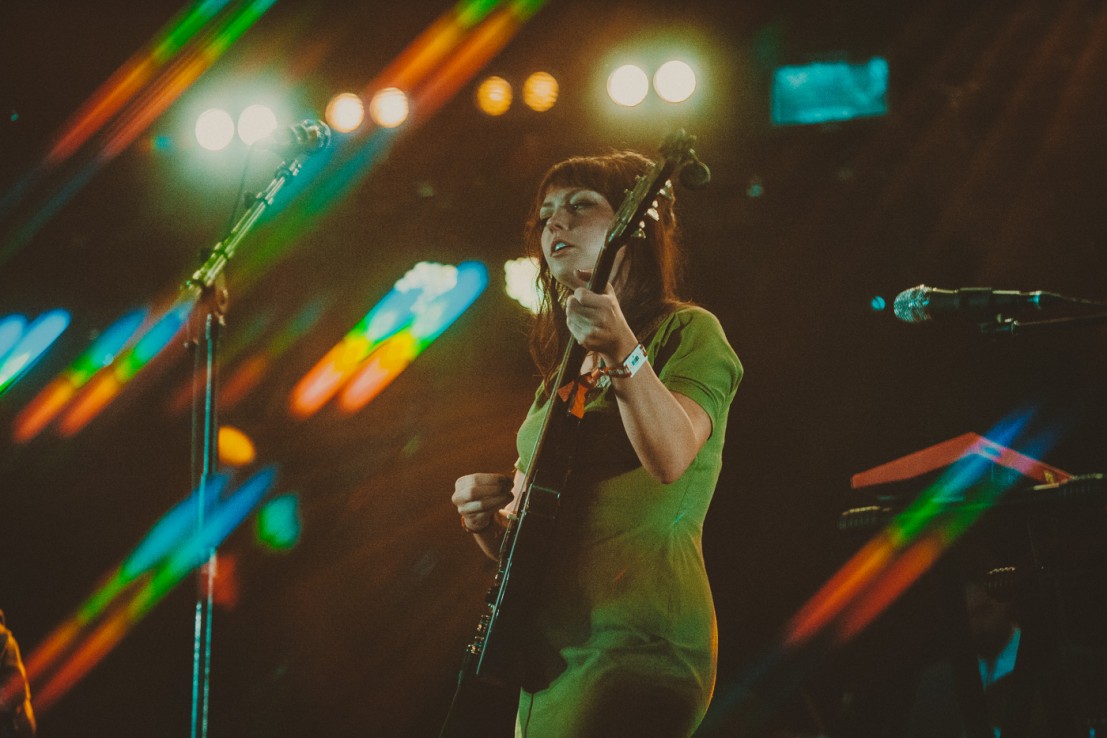 Topping everyone's list of must-sees at Roskilde, Olsen brought her sarcastic wit and Dolly Parton vibrato to a huge crowd at Roskilde. Her stunning warbling vocals have been lent to Bonnie "Prince" Billy records - but with two solo albums under her belt released through Jagjaguwar and with her suited-up band and chic mini-dress, her festival sets this year are proving how much she's settling into her distinct style and persona.

If you heard that Alex Cameron's high-concept stage persona is that of a failing entertainer, it's hard not to think up some sort of Alan Partridge-esque character. When you see that the whole band is sporting high-waisted '90s jeans, it's even more of a stubborn preconception to bust. But his aesthetic and awkward dance moves work in a symbiotic way with his effortless breathy vocals and endearing conversation between songs ("It's important to keep hydrated. Make sure you drink lots of water, guys"). Signed to Secretly Canadian, the Australian's live set is steeped in dejection and defeat with a vein of facetiousness running throughout ('there's this woman on the internet/even if she's just some Nigerian guy'). The dark and arty Gloria stage suited his set perfectly, and his performance of the gloomy, minimal "She Takes Care of Business" was goosebump-inducing.

It was a seriously tough set time for Jagwar Ma, clashing with both Foo Fighters and Lorde, but the rag-tag bunch who showed up at the intimate Avalon tent were treated to the Aussie trio's woozy vibes, synth loops and jangly guitars. The Brian Wilson-esque vocals of "Come Save Me" brought the sing-a-long that was made for uplifting the moods of a tent full of damp, cold Danes. The set delved through their contemporary psychedelia and Madchester-influenced electro, at one point morphing into a beat that was so Underworld, I thought singer Gabriel Winterfield would burst into 'lager lager lager.' 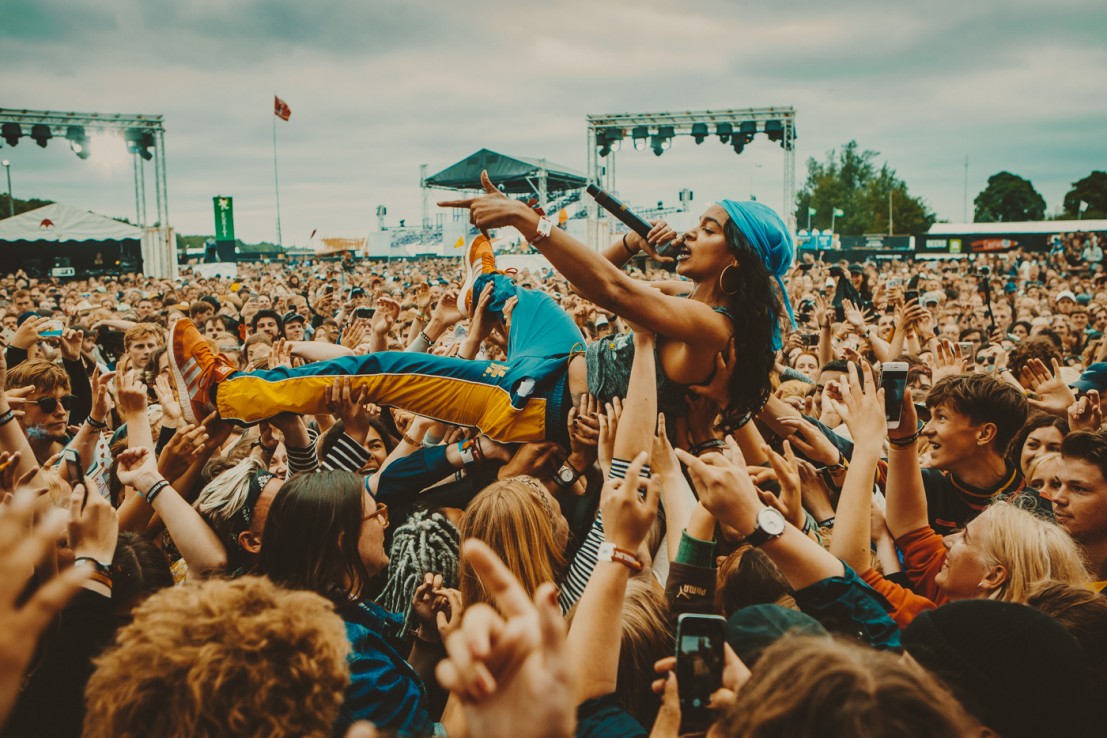 “I’m a shape-shifting bitch,” Princess Nokia snarls in "Brujas", proving this as she bounced between rapping and singing skilfully: rap-goddess one moment and rock star stage presence the next as she crowdsurfed and spurred an unexpected mosh pit at the Apollo stage. 25-year-old Destiny Frasqueri, AKA Princess Nokia is establishing herself as a champion of the NYC underground rap scene, independently self-releasing her EP and mixtapes.

Without doubt the slickest set to materialise in Roskilde, Solange and her band were placed there on a velvet cushion by the same angelic being that created the celestial four-part harmonies in "Cranes in the Sky". The sleek yet subtle full-band dance routines, matching pillar-box red outfits and minimal, polished pop tunes soothed away any delicate heads from the night before. 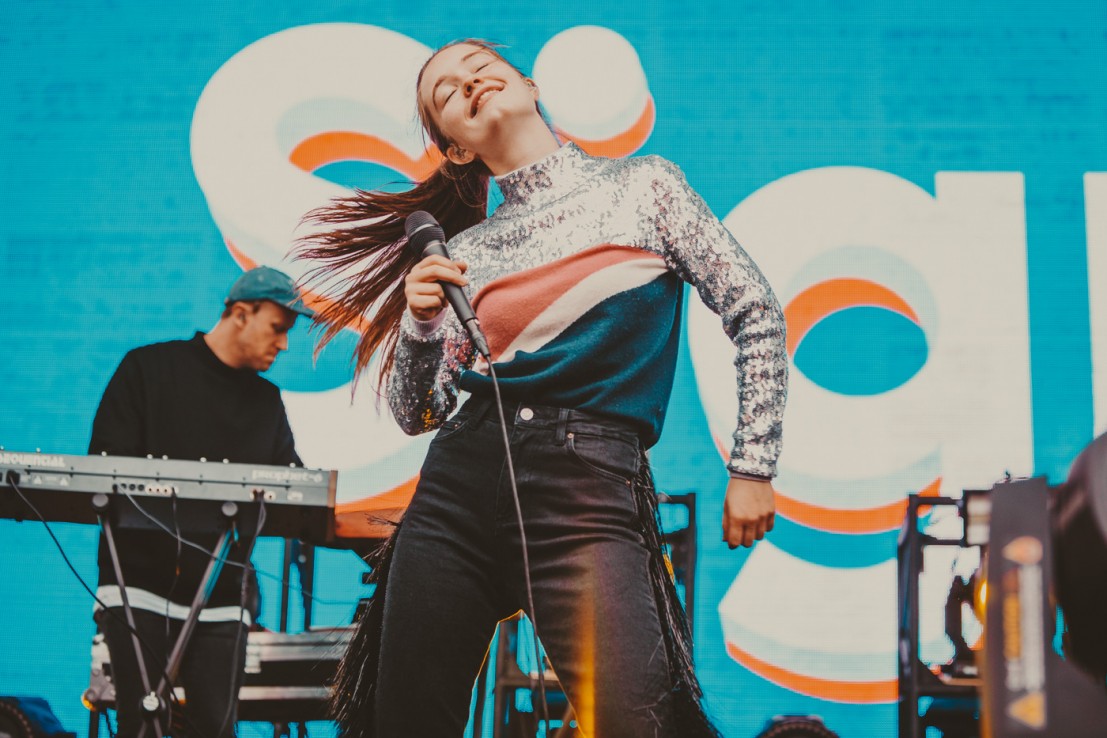 Despite her early set time, Sigrid drew the crowds for her sprightly Scandi-pop ditties, and wins the title of looking the most genuinely chuffed to play Roskilde. At the tender age of 20, the Norwegian has already had huge success with "Don’t Kill My Vibe", and with her endearingly youthful pop and pure voice, there’s a lot more to come from Sigrid.

Roskilde has seen them through since the beginning, hosting the peppy Swedish twosome on the up-and-coming talent stage back in 2012 before their huge breakthrough hit with Charli XCX on "I Love It", and support slots with pop giants such as Katy Perry and One Direction. Icona Pop injected the perfect amount of energy into a tricky 2am slot, with the crowds singing along to what was basically the story of a lot of their Roskilde experiences (treating weekdays like the weekend, drunken nights, blurred memories and cracked phone screens, likely from the one million litres of beer consumed at the festival).

The Icelandic five-piece’s chilling art-rock soundscape suited the Danish weather on Friday at the Pavilion stage. They were showcasing a change in pace with their first English-speaking album, Kinder Versions. With her strong-yet-breathy vocals, it’s no surprise that Mammút's lead singer Kata is the daughter of a former Björk-bandmate, but she took surprising turns to more animalistic and guttural sounds on songs like "Walls". 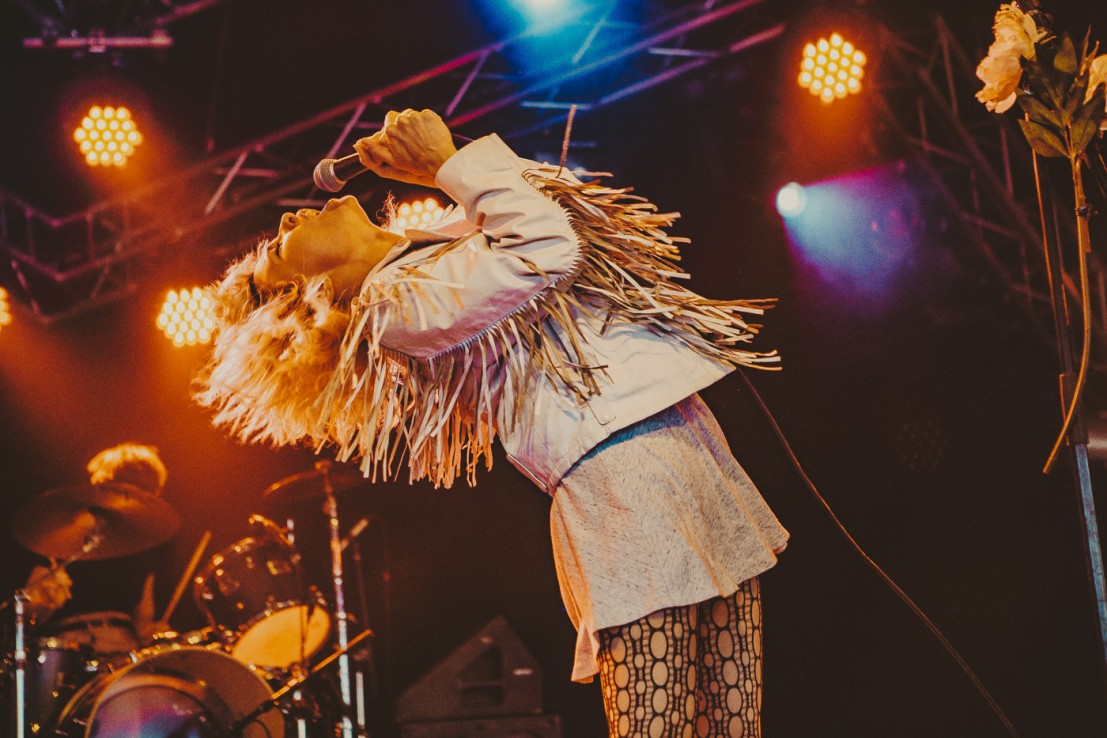 Walking onto the Pavilion stage looking like Dolly Parton in an all-white ensemble involving cowboy boots and a fringed jacket doesn’t seem very DC punk, but as soon as lead singer Katie Alice Greer shouted the politically-charged opening bars alongside prickly rockabilly guitar riffs, it became clear the playful all-American aesthetic has much darker and more topical undertones. Priests are true to their DIY ethic, having released their debut LP Nothing Feels Natural on their self-run label Sister Polygon Records.

Roskilde 2018 will take place from 30 June - 7 July 2018 and tickets will be on sale in the Autumn from roskilde-festival.dk