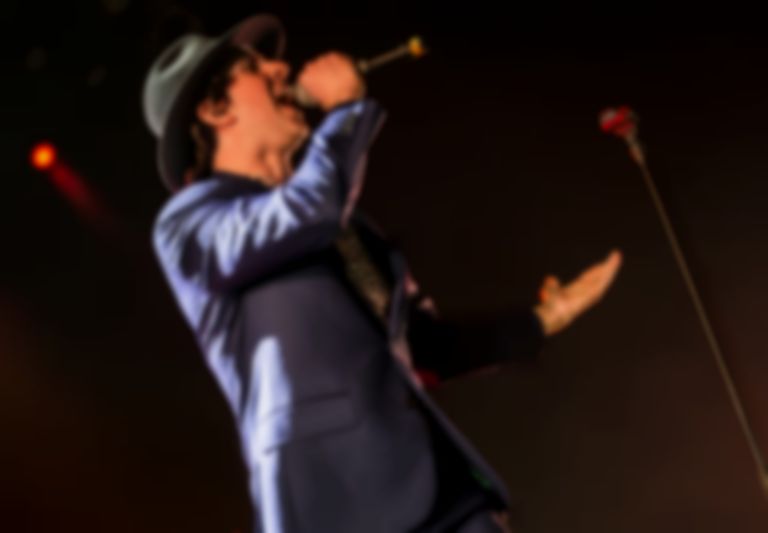 We’re at the tail-end of a triumphant, sold-out performance from Maximo Park at Newcastle’s O2 Academy. The band’s dapper and peerlessly impassioned frontman Paul Smith is in singular form, eyes widened, fists clenched and visibly intent in making a final impression at a homecoming show framed by the politically-inclined pluck and guts of their latest album, Risk to Exist. Empty statements have never found place in his band’s primed, romantically-charged lexicon, but having it spelled out so clearly, just as the night peaks in glorious Technicolor, proves powerful.

Even for a band whose eminently zealous live show has only blossomed over the years, the devoted buzz in the room this evening (6 May) feels genuinely special, and all but touchable testament to Maximo Park’s enduring pull. With several (rather good-natured, of course) pit surges at the front forming throughout a career-spanning set, the band start on the vehement title track from their new record, before the supreme maudlin jangle-pop of "Books from Boxes" and another new cut, "What Did We Do To You To Deserve This?" – with its syncopated strut and slick, earworming tangents – set the tone.

As ever, Paul Smith is a fired-up and unstoppable force throughout, flinging himself across the stage with a magnetism and resolve that few talismen of his band’s ilk have come close to commanding. With family members in the audience, he recurrently references not only his deep pride of being from the area, but also of those working-class roots that has always informed the tone and weltanschauung of their craft. Doubling up as an introduction to new track "Work and then Wait", the vocalist takes perfectly-phrased issue with the skewed view some have of people from their neck of the woods regardless of erudition or accomplishment. With a wry smile yet firm tongue, Smith politely dismantles the notion that such odd, lofty attitudes hold any hint of merit or substance in 2017.

Smartly divvied by the likes of "Write This Down", "The National Health" and "The Coast Is Always Changing" – just three older songs that make for particularly stellar moments mid-set – a host of new material including "Alchemy", "What Equals Love?" and the perfectly propulsive "The Hero" are well-received from a crowd who have very clearly invested themselves in the band’s entire story thus far. And yet, with the more recent, socially-conscious efforts tempered with gems bursting with the hidden politics of the heart and soul, the band’s most recognisable singles to date – "Our Velocity" and "Apply Some Pressure" – are delivered with as much, if not more fervor and panache than the band’s new-fangled output.

Despite some utter clown barely missing Duncan Lloyd with a randomly-flung pint, the guitarist (whose playing is a joy to behold throughout) and the rest of Maximo Park bow out to a nigh on earsplitting reception following a brace of peaks including "Girls Who Play Guitars", the masterfully lovesick "Parisian Skies" from 2007’s Our Earthly Pleasures and set closer "Get High (No, I Don't)". Wading through the sea of disposed plastic cups and beaming faces shortly afterwards, one can’t even flirt with the hope of denying Maximo Park’s continued clout as not only one of the UK’s finest ever guitar bands, but as an act who – galvanized by the less than strong and stable Zeitgeist – are filtering the bigger picture in novel, compelling and, perhaps most tellingly, persuasive ways. For a band who thrive in the realms of longing and nostalgia, tonight's show – bolstered by Smith's astute belief that "time is fluid" – is a firm celebration of the now, whatever that may entail.