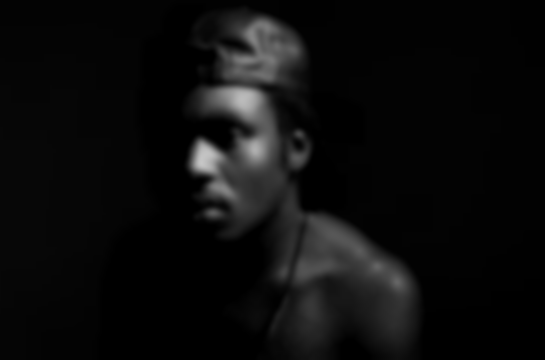 Paired with a gig at Village Underground the night before, this was Blood Orange aka producer/singer/songwriter/hipster luvvie Devonté Hynes’ first gig in his hometown in just over two years. In his absence he’s transformed himself from an awkward, mop-haired, alternative indie dude into a cool, slick , genre-defying producer known for crafting hits for Solange Knowles and Sky Ferreira, as well as his own Blood Orange project.

Donning his trademark singlet, Hynes’ restoration to the London stage felt like the triumphant return of a gold medal winning Olympian being cheered on by a clearly besotted crowd. However, understated opener “Chamakay” highlighted what could be an issue for the softly spoken singer as his voice was somewhat lost amongst the instruments and audience. The challenge would be to transfer his latest album, Cupid Deluxe – a record intended to be heard in solitary, preferably whilst staring at a pre-Instagrammed sunset (or sunrise if that’s how you roll) – into an all singing, all dancing live show for the extremely tightly packed together gathered masses.

Thankfully, support arrived, literally, in the form of Friends frontwoman and Hynes’ girlfriend, Samantha Urbani. Her vocals are peppered all over the LP and her appearance on “You’re Not Good Enough” as well as most songs on the night, created a welcome balance on stage without stealing Hynes’ limelight, as she happily blended in with the band and found herself out of most people’s eye-line stood behind one of 100 Club’s convenient pillars.

As images of his adopted home of New York were projected onto a screen behind him and his love beside him, Hynes found his mojo, announcing to the audience, “We’re allowed to have fun,” before using his proclamation as a disclaimer for engaging in his own playful shimmies and hip-swivels. The gig was almost wholly centred around Cupid Deluxe with only a bass heavy “Sutphin Boulevard” from previous album Coastal Grooves and rare B-side “Bad Girls” creeping into the evening’s setlist of the 28-year-old Essex native’s contemporary minimalistic mash-up of 80s and 90s R&B. The drums hit harder and the guitars purred stronger as the show went on and by the time grime MC Skepta hit the stage for his introspective Londoncentric collaboration “High Street”, the band churned out an energetic take on the wispy album version.

As Hynes closed the gig (part of Converse’s live series at the 100 Club), the crowd had completely submitted their will to him – the “come into my bedroom,” mantra from “Time Will Tell” felt like a personal invite to everyone there to follow him backstage, or to Manhattan, or to wherever. Solitary succeeded right? Well, until loads of people invaded the stage and shattered the illusion somewhat. In reality it was only Urbani who would accompany Hynes back to his abode, but as he ushers in a new era of pop infused R&B, it’s pretty likely that it won’t be another two years until he’s back in town, most likely playing a much bigger venue. See you there.