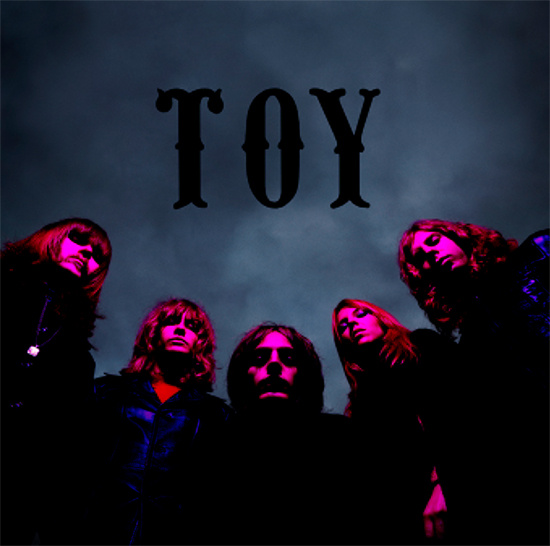 What’s your take on buzz bands? Do you eagerly rush out to get your hands on anything and everything that bears their name? Does common sense tell you to exert cautious interest and investigate whether the hype’s justified? Or does your revolted stomach churn itself to mush at the very thought of them? Not that TOY have been buzzing at a particularly high frequency – thus far they’ve escaped the levels of hype that proved too much for the likes of Viva Brother or Glasvegas, and they’re absolutely nowhere near the fanfare that greeted The Strokes’ unsuspecting swagger into a pressure cooker environment. But there’s still a faint whiff of expectation surrounding this self-titled debut, and it’s certainly fair to wonder whether it’s merited.

TOY’s origins famously lie in the dissolution of forgotten Razorlight wannabes Joe Lean And The Jing Jang Jong (eurgh), and if the album is notable for anything, it’s the hard-earned confidence that only comes from frequent touring of the toilet circuit. The seasick fuzz of ‘Colour’s Running Out’ gives a hint of the noisenik shoegazer-isms to follow (expect to see reviews spattered with phrases like “soundscape” and “sonic cathedral”) – as opening tracks go, it’s no ‘Janie Jones’, but it sets the stall out pretty well. Vertiginous guitars swoosh and swirl around a fractured melody, before a loping bassline introduces Tom Dougall’s dispassionate murmur. “It’s all out in the clear”, he declares, vaguely referring to the exposure of some unspecified untruth. As with most of the lyrics on display herein, this song will almost certainly frustrate punters who wonder why songwriters can’t all throw words together with the dexterity of, say, The Mountain Goats’ John Darnielle. But the lyrics are very definitely not the focus of this record – this is all about sound, volume and texture, and the London quintet set to their task with aplomb.

Sharp-eared listeners might observe that the majority of TOY’s ideas have already been executed by Deerhunter; it certainly wouldn’t be unreasonable to suggest that songs like ‘Motoring’ and ‘Strange’ feel like outtakes from that band’s Microcastle opus. But the scope of their inspiration is wider than aping Bradford Cox’s lot: ‘My Heart Skips A Beat’ peers over The Pains of Being Pure at Heart’s shoulders to see what they’ve understood from The Cure’s mope-psych classic Disintegration, while elsewhere there are nods to kosmische, post-punk and My Bloody Valentine’s skyscraping soar. The sampled strings of ‘Reasons Why’ sound just a tad like The Flaming Lips in the same way that MGMT sound a tad like Flaming Lips – less off-kilter psych, more atmospheric pop – but this is merely indicative of the refined, tasteful approach the band have adopted, with regard to some rather agreeable influences.

And this, in a way, might just be the band’s main problem – it’s almost too respectful to the sounds it imitates. TOY never threatens to sound like something unprecedented; it merely doffs its cap to existing sounds. Furthermore, it never really surprises – ten-minute closer ‘Kopter’ desperately wants to be an explosive freakout, but instead it just plods around the same moderately-exciting riff for what feels like an eternity. When it comes to playing it live, one suspects they’ll truly cut loose, but here it feels somewhat polite. These are contributory factors to the album’s lack of genuinely memorable moments, and in the absence of a stone-cold classic track, it’s unlikely to feature on too many “greatest debuts” lists in ten years’ time. It sounds great, which bodes well for future endeavours, and thankfully there’s enough to suggest that their potential outweighs these promising beginnings. Immerse yourself in the razor-wire tension of kraut-tinged instrumental ‘Drifting Deeper’ and imagine how good they could be with a few more hooks, a bit more chaos and a lot more reckless abandon. That’s the buzz they should be aiming for.