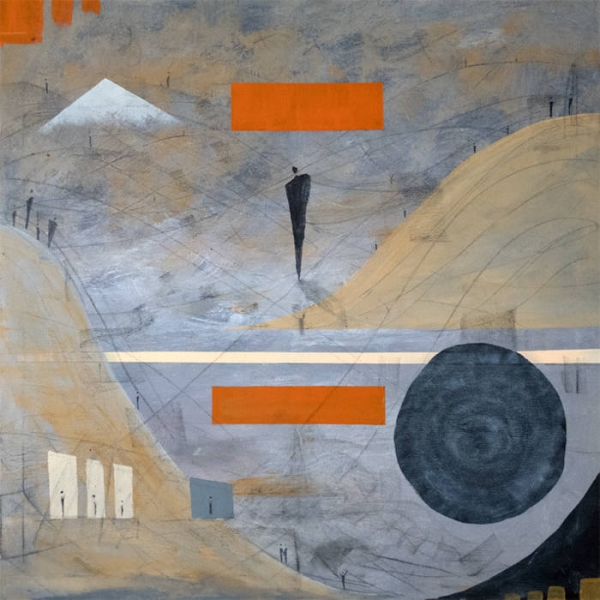 If Nick Cave were a small man from Yorkshire and sang his anxiety dreams in a falsetto, it would sound something like this.

The Little Unsaid have trodden the leftfield alt-rock edges of prolificacy for some time now. Last year’s Selected Works was an intricate piece of archival digging introducing the songs of John Elliott to most with moments of melancholic brilliance. "Day Is Golden" started with the curious heartbreak of “Once cried all day ‘cos I used the wrong toothbrush” – you’re unlikely to find a more acute lyric describing a painful awareness of one's mental ill-health.

Stepping away from discovery and into intent, Atomise is the London/Aarhus-based quartet’s response to the division and unrest that has crept into modern life. It’s doesn’t burn the Brexit flag at both ends (implicitly), but unravels the sad unease that sleeps in the pit of your stomach whilst living within the chaos, in some half-defeated search for empathy.

On "Human", Elliott’s unexplained sadness is “swamped with Xanax and plastic toy guns” through a piano-led ballad for a washed-up crooner, trying to understand his history by substance abuse and Indiana Jones. "Story" is a poetic objection to precipitous social journalism, sang over the haunting cries of a choral loop. On "Spiderman", it’s only Tim Heymerdinger’s mesmeric pattering drumbeat that stops the track floating away into an ambient wave of romantic poets and philosophising quests for the truth. You can hardly believe the sincerity with which Elliott murmurs the line “I’m so deliriously happy” – a gorgeous whiplash of delirium and hazy reveries.

Engineered by Sonny Johns (Fatoumata Diawara, Portico Quartet) and mixed by Graeme Stewart (Jonny Greenwood), the folk stylings and deft electronics ebb through Atomise with as much ease as Radiohead’s "Desert Island Disk". Songs about division and uncertainty pick at the lines between friendship and dependence, humanity and pathos. There are self-aware drive-time tracks for supermarket bargain buckets and squelching dancefloor basslines, too.

It’s a full embrace of escapism’s pastiche. They make no attempts to curtail the hopeless romantic kneeling on a mountain-side, hands raised, crying in despair (“it’s all I can do to keep my heart wired to the idea that I’m still free”). Like Friedrich’s Wanderer Above A Sea of Fog, Atomise is peacefully interpreting the chaos without purpose. It won’t dream up a remedy to 21st century depression, but it will lend you some comfort along the way.