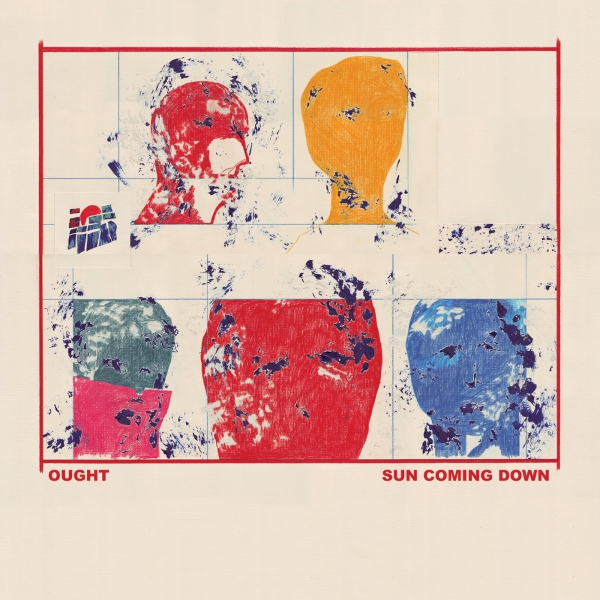 It was a refreshing proposition to discover that Constellation Records were releasing a post-punk album full of spiky rhythms and choppy riffs, it was even more pleasing when 2014’s More Than Any Other Day also proved to be one of the best debut albums released that year.

Montreal band Ought, eager to keep the momentum of their fantastic debut going, toured the US extensively, got tighter as a band and at the beginning of 2015 headed for studio to write and record follow-up album, Sun Coming Down.

The sound of Sun Coming Down is even more economical than their debut. Gone are those sporadic string-laden drone sections as well as the kind of jerky riffs which laid the foundations on tracks such as “Pleasant Heart”. Instead, Ought ramble and twitch with greater freedom and intensity, the overall feeling being that of a band that embraces their inherent naturalism and doesn’t fastidiously agonise over retakes and overdubs.

Tim Darcy is no singer. He warbles and squawks like a young Mark E Smith. His rambling delivery propels songs; anxiously shuffling forwards in a busy huddle of trebly guitar noise and steady drumming. His lyrics are at his best when – as on lead single “Beautiful Blue Sky” – they focus on the mundaneness of the everyday.

With such simplicity in its sound, the brilliance of Sun Coming Down lies in the album's pacing. The natural shifting of tempos within and between tracks keeps the record feeling strikingly vital, from the repetitive opening keyboard chords of opener “Men For Miles” to the final imploding guitar jam of “Never Better” which closes the album.

They hammer two chords on “Men For Miles”, vocals follow the basic guitar melody creating a pleasant ear-worm, breaking the highly strung tension going into the chorus by stemming the incessant guitar rhythm. This ducking and diving tempo and changing of intensity happens occasionally throughout the album, unleashed at opportune moments to cause maximum effect. They switch from washy chords and cymbal splashes to a more upright style of playing on “The Combo”, this sudden change is jarringly affective, as is sudden switch between spiky post-punk to something ironic and almost seedy on “Celebration”.

When Ought slow down the pace, they allow the lyrics and chiming guitars to shine. “Passionate Turn” begins with a lazy drumbeat and a single note repetatively played on guitar until segueing into a simple, plaintive melody. Darcy laments that he has “given up love”.

Standout track “Beautiful Blue Sky” sees Ought thriving on their utter simplicity. Beginning like a track from Television’s Marquee Moon, repetitive guitar chops and steady metorik drumming lay the foundations for Darcy’s finest lyrics on record. Focussing on inconsequential small talk and mundane chit-chat, Darcy barks lines with unerring persistence: “Well, how's the family? / How’s your health been? / Fancy seeing you here.” It’s hard to tell whether Darcy finds these inane conversations laborious or oddly life-affirming, the ambiguity furthered in the starkly highlighting lyric which opens the underplayed chorus, “I’m no longer afraid to die / because that is all that I have left / yes!”. The gloriously languid feedback solo signs off the track with a strange emotional punch.

Suns Coming Down offers plenty of what made More Than Any Other Day so compelling: the terse guitar work; the laconic vocal delivery; the simplicity of sound and style. Ought combine this with added emotional depth to their delivery and performance and a more measured understanding for pacing tracks and sequencing the album as a whole. There are no tricks on show here, the sound is refreshingly clean, the ethos is admirably simple, embracing the DIY punk spirit and spitting out a beautiful record that will also fill that Sonic Youth-shaped hole in your life.