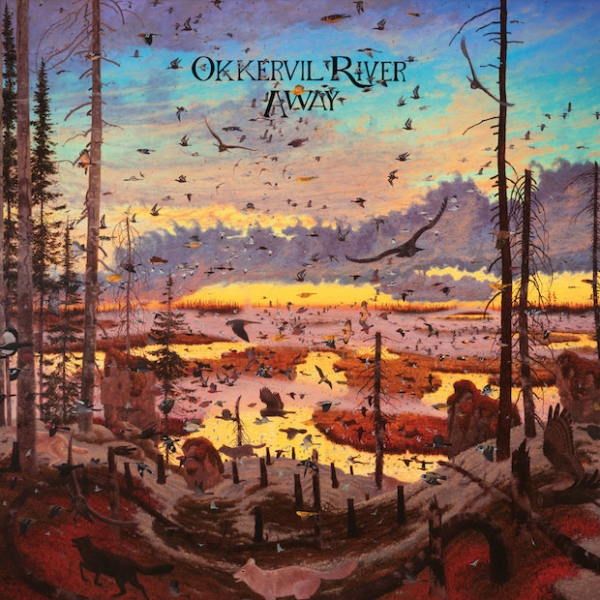 Born of great personal loss and the disassembling and reassembling of the band itself, Okkervil River’s Away is a quieter, more sullen turn from Will Sheff and his new recruits. It doesn’t have the dramatic thrust of The Stage Names or the hazy nostalgia of The Silver Gymnasium, but the band’s latest is terrifically contemplative and sonically unique among their expansive catalogue.

“Okkervil R.I.P.”, the album’s opener, deserves to be mentioned in the same breath as any of the band’s best songs. A series of vignettes both endearingly described and undeniably grim that grow bleaker as the instrumentation gets bolder. It also happens to feature some of the richest writing Sheff has ever done.

“I hightail my cool haircut / Through the turnstiles of the airport / On the run now / Flip a couple hundred pages / I was turning thirty-eight / I was a horrible sight”, he proffers as the song starts to build.

That track sets the scene for an album that balances Sheff’s typical character portraits (deliberately more roughly sketched here than in the past), with ruminations on the loss of his grandfather, T. Holmes Moore, a tremendously influential figure in his life.

“Comes Indiana Through the Smoke” is a touching eulogy, a tale fixated on Moore’s ship during World War II, portrayed here as the chariot that comes to shuttle him in his final moments. It’s a touching song even without knowing its meaning, filled with arresting images from Sheff and deft instrumentation, including an elegant trumpet line played by yMusic’s C.J. Camarieri on Moore’s own horn.

Tinged with a country twang, “The Industry” captures the lung-crushing feeling of waywardness that comes with seeing those around you change for the worse. In classic Sheff fashion, it’s simultaneously one of Away’s most uptempo tracks and also its bleakest. There’s humor certainly, but no nugget of positivity to cling to, just some particularly wry put-downs.

“Do you remember, baby, back in '96? / When some record was enough to make you raise your fist? / When some singer'd make you sure that you exist?”, Sheff inquires.

The sprawling “Call Yourself Renee”, written while Sheff was “on psilocybin mushrooms on a beautiful afternoon in early fall in the Catskills”, tumbles out effortlessly and unstructured like the best psychedelic-fueled profundity. Acoustic chords, dainty piano, and soft strings glimmer in and out of focus while Sheff trades his usual pinpoint specificity for a more splatter paint approach to rendering characters  (“You live in a hotel /  You wait for a phone call / You wait for an email / You look out the window at a tree weighted down with snow”).

“Frontman in Heaven” has the most immediate oomph of any track on Away, which makes sense given that it was written during a frenzied three-day marathon session. But while Sheff said “It wasn’t a pleasant experience”, the result is the closest he comes to replicating the band’s sound on records like Black Sheep Boy or The Stand Ins.

Of course, Sheff knows that too much has changed to ever fully go back, and he says as much in a conversation between himself and whatever deity he’s spending his time around. “I recall when things were way more fun around here / But the Sky Man reminds me I’m almost a ghost of myself / It seems to me everything fine fell away”, he sings.

Sheff summed up Away by saying, “It’s not really an Okkervil River album and it’s also my favorite Okkervil River album”, but the truth is that it’s unmistakably Okkervil. No other band could tackle such weighty topics in a way that never feels heavy-handed or mawkish. It may take some time for casual fans to fully embrace the record’s shifting sound, but anybody who has ever dealt with loss can get something out of Away.