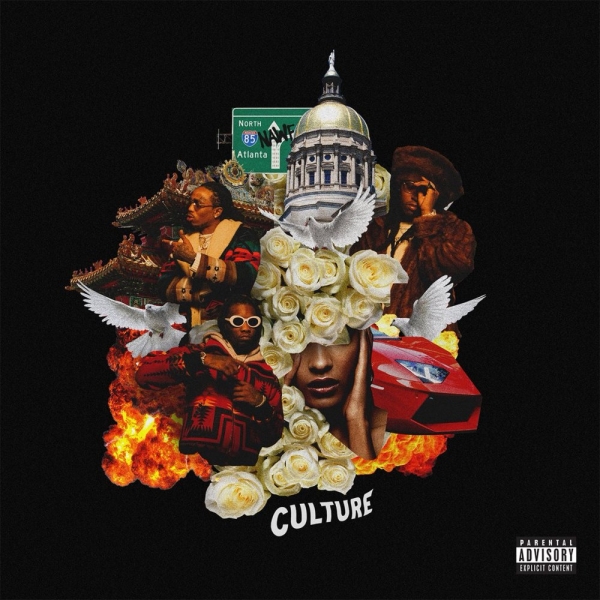 Migos is the culture. They’re at the top of their game right now, being hailed as the ‘Beatles of our Generation’ by Childish Gambino - aka FX’s Atlanta mastermind, Donald Glover - and their raw talent and distinct style comes across strong on their second studio album.

It’s been a long time coming. After the album announcement, a few delays and teaser singles, Culture shows the trio’s growth as rappers since Yung Rich Nation in 2015 and their now perfected formula for hit-making. Migos mixed and mastered the entire record themselves, with assistance from Atlanta’s most sought-after producer, Metro Boomin, and long-time collaborator, Zaytoven. Offset explains the meaning behind the name Culture as "time to let the culture be known. It’s time to claim it. And it’s time to claim that we are the Migos, and for people to understand that this is what we did. We did a lot for music. Migos is the culture." The 12 track album is the product of a rap group who have finally come into their own – and are ready to claim their culture.

After kicking off 2017 at the top of the US charts with “Bad And Boujee” and breaking into the UK top 40 last week, the album rides on the momentum on the solid stream of singles that followed”, such as “Call Casting” and the much-hyped “T Shirt”. The trio of rappers have finally broken into the limelight after fleeting periods of mainstream success through past singles “Look At My Dab”, “Fight Night” and “Versace.” This album is jump from those days talent-wise, as they fall into a flow of tripled-up bars and a start-stop rhythms over trap funk beats.

Culture shows that Migos know well who they are and why they do what they do. Quavo stands out with his perfected melodies and hooks, but don’t sleep on the other two; Offset, arguably the best lyricist of the group, shows a smooth, matter-of-fact delivery with witty bars and Takeoff’s deep vocals are always set apart. It’s the distinct vocal elements of each member combined that showcase their addictive, no-bullshit flow. The album also features a few heavyweights on some tracks, with DJ Khaled on the intro “Culture”, Gucci Mane on “Slippery" and bars from Travis Scott on “Kelly Price”. Even 2 Chainz drops a verse on “Deadz.”

What’s unique about the Migos of Culture is the general moodiness of the beats. On “Deadz”, which features a surprisingly charismatic 2 Chainz, the Fab Three drop bars on flossed-out dark beat that sounds like a drowned out royal horn fanfare. Despite the horror movie soundtrack vibe, their flow rattles off like gunfire as they ease into each song with a cool and composed confidence.

“Kelly Price” emanates a similar blurry consistency with a subtle drum-track, upon which Travis Scott fits perfectly. This particular tune is a hidden gem, if “Bad And Boujee” gets you hype, “Kelly Price” will ease your mood. The melodic tones of each song highlight how the group’s raw talent has developed since Yung Rich Nation. Their similar but improved appeal comes from multi-rhythmic rhymes and a rapid delivery of bars that never compromises their deep sound.

Here, Migos never try to recreate anything they’ve already done, but simply deliver more music that reflects their contagious, unadulterated flow. Culture is an album where they seize a moment of much-deserved success.