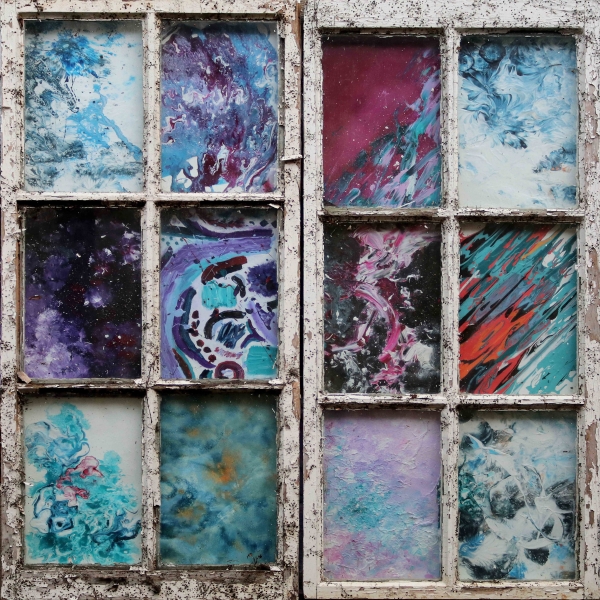 Sounding as slick and artsy as Alt-J but with an added darker side, Caro are a cool new band making interesting, introspective indie.

Far away in the depths of frontman Adam Pardey’s bedroom, way back when in 2012, the tracks that make up Burrows began to be brought to life. After several years of bashing them about open mic nights alone, a band was formed in Leeds College of Music, where Pardey met drummer Bryn Jenkins and bassist Andrew Thompson, and the songs could reach new levels when played live.

Caro then became about experimentation: pushing the instruments to new places and new sounds; rejecting the digital for the synthesized organic; “trying to find entirely new ways of making guitar music sound like a merging of the human and the technological”.

The sound of Burrows therefore is a Frankenstein’s monster of ideas, rhythms, and waves, pieced together over many years - a powerful yet harrowing experience when it comes together as the fully realised creation of Pardey’s mind.

It’s fair to draw on comparisons with alt-rock brethren Gengahr or Alt-J, but Caro also explore less travelled routes of heavier basslines as well as rivers of folk influence, dappling through the leaves of this eclectic forest. With humour and intrigue they mix the electronic and melodic into an entirely isolating world. The tracks are heavy with curious narrative as well as pragmatic self-reflection, as Pardey’s own anxieties and insecurities are externalised and recounted, to the tune of his own ranging vocals.

Self-proclaiming that the tracks are often autobiographical, we see many different moods in which Pardey attempts to tackle his inner demons. Take “Cold Comfort” or “Closet Lunatic” for example: ferocious basslines and bold instrumentation see him distanced from the third-person narratives he drives, thoroughly in control. Inspired by the novel Perfume: The Story of a Murderer, “Monster Man” takes this one step further, as he totally fixates on the personification of his own self-loathing, into an abhorrent creature of an antagonist, but to the seemingly innocent tune of a fairy-tale. “What you see behind his eyelids / Is so cruel, he hypnotizes” Pardey playfully sings, ultimately, about himself. The monster becomes blinded and then nurtured by love, yet unable to control his own destructiveness still finds himself alone at the story’s end.

Deeper still, single “Cat’s Pyjamas” is a catchy synthy tune that is actually about Pardey’s struggle with thoughts of suicide. He confronts the subject that’s so personal, yet also very universal, with a huge amount of humility, in order to get it “out in the open”, no longer let it be a matter of fear, and to “feel less alone in that feeling”. On tracks like “Figure Me Out” and “Out To Get You” he goes easier on himself, gently putting his hands up to his attacker, and coming to terms with his faults and feelings towards the vilified character of himself.

On the surface this band is whimsical and experimental but delve into the depths of their lyrics and the inner darkness becomes apparent. Adventurous and often enchanting, Burrows is one of the more intriguing debuts of the year.