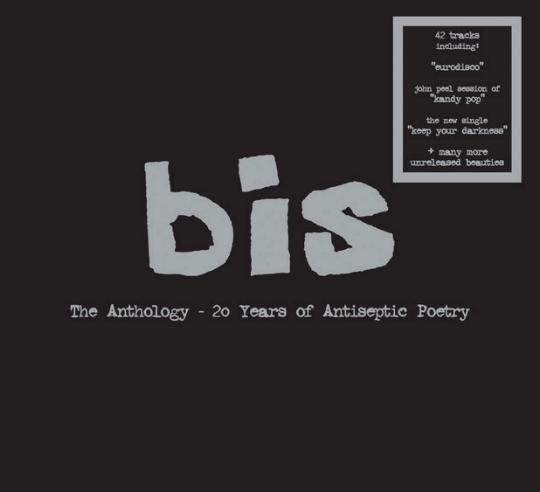 Does it seem more remarkable that Bis are able to release a twenty year anniversary double CD compilation, or that it includes new songs? If any group was surely destined not to last beyond the mid-90s, it was the three hyperactive Glaswegian teenage fanzine kids with cartoon stage names - John Disco, Sci-Fi Steven and Manda Rin. Big on anime and sugary sweets, on emergence they largely dealt in cheap keyboard and fuzz guitar-driven saccharine indie-pop songs called things like “Secret Vampires” and “Icky-Poo Air Raid” and packaged their junior escapist worldview under their own ostensibly cutesy movement, Teen-C, which Disco would define as “a mentality. It’s about prolonging your feeling of youthfulness.”

Except there was something else going on, and not just in the way those supposedly scrappy songs had their fair share of big hooks and earpricking moments. In Britain, after a couple of EPs on the hugely influential local label Chemikal Underground, they signed to Wiiija, a few years earlier the docking bay for most of the UK arm of Riot Grrrl, a movement that influenced much of their personal politics. In America they were snapped up by the Beastie Boys' Grand Royal imprint. Disciples of Huggy Bear, Bikini Kill and Ian Svenonius' Situationist post-hardcore outfit Nation Of Ulysses on the one hand and early 90s house, early 80s synthpop and original disco on the other, they've addressed gender issues, media imagery and ennui in their lyrics. Whichever way you slice it, there are few greater anomalies than this being the so-called "first unsigned band on Top Of The Pops", as the press billed them when they performed the cutesy "Kandy Pop" on the show in March 1996. Guest presenters that week were MN8, of 'I've Got A Little Something For You' semi-fame. Those were the days.

Inevitably, a band whose three albums of their original run saw a gradual development from DIY dayglo to buffed to a shine new wave disco to low-key synth sweeps have decided not to put their life's story into chronological order. Indeed, this isn't a career overview for beginners as much as it sweeps up a great deal of unavailable, unreleased or just plain overlooked material - there's live versions, remixes, demos, side projects, songs never properly released in the UK, a track from a 1997 split single with Lugworm and songs that generally haven't been available for years - 'Detour', their better than it may sound diversion into trip-hop, isn't here but its 7" B-side is. Of the two new tracks, "Social Dancing" (seemingly more unreleased at the time than entirely fresh, and sharing a title with their second album) is a five minute instrumental built on synth squiggles, bass pulses and a nagging one-finger keyboard hook, while "Keep Your Darkness" stomps along on a glam guitar riff.

Among the other forty tracks there's still plenty of admirable homebrewed spirit in the early songs, glorying in outsider culture ("we are the future that nobody knows" from "School Disco") and pitching themselves against The Man and those who "let down the kids" ("Tell It To The Kids"), not least on the caustic industry-baiting "This Is Fake D.I.Y." To say at a lot of these early times they really wanted to be a punk band isn't too much of an overstatement. What the collection does however suggest is that Bis were for all their scrappy DIY credentials eventually more geared and open towards the electronic sound than continuing down the path that made them famous. Second and final top 40 single "Eurodisco" which opens the collection and reappears towards the end as remixed into swirling filtered house by way of Depeche Mode by Stuart Price in his Les Rythmes Digitales guise, finds a middle ground between spirited distorted guitar thrash and propulsive synthpop without really ended up overbearing on either. The sound hit upon as a result was returned to with successful gusto on "Rulers And The States" recorded as part of their post-Bis band Data Panik and somehow not released until last year.

Not all of it comes off, and it doesn't help the thought that maybe once they'd shed their earliest associations upon getting older and taking on more indirect influences they struggled to commit to a sound that was resolutely theirs, but they're clearly having fun trying to work their influences into their universe and push against their musical comfort zones. "Today Of All Days" sound in various ways like both early Human League and 80s Madonna, "Protection"gives a house beat a motorik edge, "Sound Of Sleet" and "A Portrait From Space" meander and create icy landscapes not unlike Zero 7 roughed up, while "Robotic" could have sent them in a different direction towards the electroclash scene. "Silver Spoon", with its synth wash and pop melody over the top, almost sounds in tune with some current trends. That the collection then finishes with a live set closing version of rabble-rousing early single "Kill Yr Boyfriend" is not only sequentially cute but goes to demonstrate that, as uneven as it makes anthology and career alike seem, Bis are and were a band in control of what they were doing and able to split their sound pretty much into two distinct and relatively diverse halves without really harming their fusion of synthpop eclecticism and youthful indie exuberance.