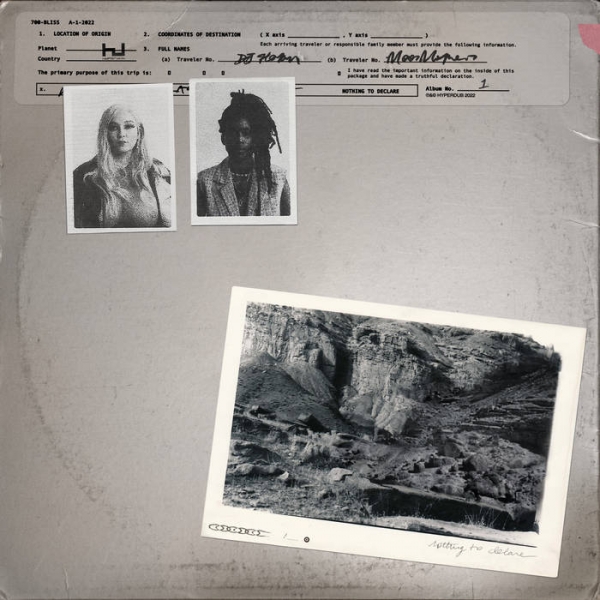 Irony is not exactly what you expect to encounter as soon as you unwrap a new album, but with Nothing to Declare, you encounter a healthy dose of it.

By name, this latest project from Philadelphia duo 700 Bliss seems to promise an unproblematic batch of songs that will most likely conform to some arbitrary genre boundary – after all, it has nothing to declare. However, this raging record sticks it in deep, broaching some of the most difficult themes right at their centre and doing it on the back of a supremely unique sound.

Moor Mother and DJ Haram – the two halves of 700 Bliss – met within the sprawling Philadelphia DIY punk/noise rap scene, honing their collective sound over numerous mic sets and noise improv sessions. Their first EP, the concise, semi-eponymously named Spa 700, displayed many of the core features that have coursed through their releases ever since. Moor Mother's insistent vocals, a peculiar brand of poetry delivered with a healthy side of urgency, constantly urges the listener to pay attention as she conveys heavy truths about our troubled world. DJ Haram's mix of her native Middle Eastern roots and dance music styles which provides a creative canvas upon which the whole project comes together.

On Nothing To Declare, these themes are apparent once again; however, over an expanded track list, the duo explores more widely to present a sound and message that is an evolution of their previous efforts. DJ Haram's palette is more colourful on this record as she incorporates a percussion-heavy instrumental that helps to create the fiery, and at times disorienting atmosphere on the album. According to DJ Haram, the beat ensemble represents an aggressive "one-sided argument, an emotional outburst that can't be controlled", and at many points in the album, this chaos is perceptible. However, it is a deliberate chaos which, on its own, carries a message. Cuts such as "Seven" and "Capitol" harness this combination of multiple styles, producing a swirling, heavy scene that is a perfect backdrop as Alli Logout elevates her energy, yelling on "Capitol", "I'm the fuckin' agitator, motherfuckin' agitator".

In terms of tone, this album speaks on some pretty touchy subjects and channels a kind of rage that is both startling but also adequate for the subject matter. On the interlude track, "Easyjet" – which is a mock critique of the album – they joke, "Not like it's the end of the world or anything, I mean, give me a break". The irony of this statement is not lost on the duo as they jump headfirst into global issues that may say otherwise. On "Candace Parker", Moor Mother laments, "they rape our mothers while y'all just record" and "We must fight injustice / Gather the masses to protest / Break down the wall that's progress" are the signals of dissatisfaction she shows on "Crown". In between these tougher cuts, 700 Bliss enlists the voices of collaborators such as Logout, Lafawndah and Orion Sun, the latter of whom contributed to one of the standout cuts on the record – "Nightflame". The singer's smooth vocals dovetail neatly with Moor Mother's delivery producing a wonderfully cohesive package tied together by DJ Haram's volatile beats.

Nothing To Declare is peculiar in both sound and concept, but the messages at the core of this album make it worth the effort to get to know it. Overall, this is a great project bursting with genre-bending sounds and heart-wrenching lyrics that perfectly capture the times.