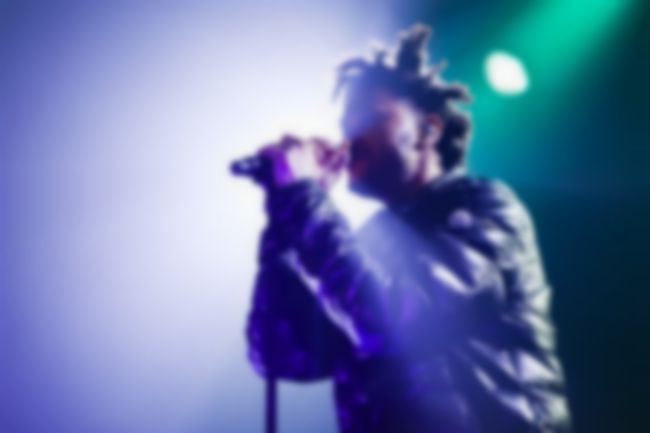 The last time The Weeknd was in London he played Wilton Music Hall (no, we weren’t quite sure where that was until we got there either). When he comes back he’s playing the O2 Arena. That is a difference of about oh say 19,600 people. Fleetwood Mac play the O2 Arena. The Who play the O2 Arena. Leonard Cohen plays the O2 Arena. Not some kid from Canada who hasn’t even technically released a studio album yet, right?

Wrong. Your technicalities mean nothing to Ontario born Abel Tesfaye, whose compilation album Trilogy (neatly titled after the three EPs that make up the bulk of its track listing) has apparently sold a cool 289,000 copies since its release via Universal subsidiary Republic Records and his own imprint XO. From enigmatic blog obsession releasing his music for free to a genuine, real life money making star in two years, Tesfaye’s rise is kind of unfathomable. Oh, did we forget to mention that tonight is the second of four straight sold out dates too?

Show time and Abel raises his hands in the air, commanding his shrieking fanfare as if a conducting a grand orchestral symphony: The flick of his wrists inspiring mass hysteria and silence in the same smooth motion. It doesn’t really matter whether you received the news of his impending November O2 arena tour with cynicism or whether you’re sceptical of his abilities to compel its voluminous halls because in he’s already there, in his head, the Electric Ballroom is an arena.

The fact that the aforementioned fanfare immediately begin singing along to every word of ‘Enemy’ plays into this mentality, Tesfaye’s agonised, sweet Michael Jackson reminiscent vocals and the crowd’s volume disguising the sheer hedonistic filth of its lyrics. There is definitely something quite bizarre about being the middle of a room full of people shouting “I wanna lose myself between your legs” but then if you’d been listening to The Weeknd since the beginning of his meteoric rise you would know that basically everything he sings about can be traced back to sex in one overt way or another.

With ‘High 4 This’ he’s soon swept the entire venue up into his sparse, down tempo R&B arms and by the time ‘One of These Nights’ comes around the shy, muted tones of the man we saw last year have all but vanished, not just behind a wall of aloft iPhones and iPads, but in a haze of sophisticated tones, a sheen of ego boosted confidence and a slick stage persona. He’s even got his own Jay-Z style “put your triangles in the air” moment worked out as everyone copies the “X” and “O” gestures he makes towards the microphone with his fingers. His vocals are still found quivering and flustering in all the right places, but as with the man, the tentative impressions left from his recorded work are bolstered with added arrangements, wailing electric guitars and rippling bass lines. A funkier groove dominates this evening’s proceedings, detracting somewhat from the soulful yearnings which appealed so much in the first place.

‘Wicked Games’ is delivered a real potency though, its pop sensibilities tripping in the background beneath irresistible upfront beats though some around me soon remark that the best five minutes of this show are yet to come, referring to the time between the end of ‘Wicked Games’ and his return to stage for the encore. Some of his fans seem a little less than enamoured this evening, his stereotypically disingenuous  comments doing little to help the matter “Scream for your city London. I want you to know that tonight’s the only night that matters” come the shrills.

We have a tempestuous relationship with bands in the UK, we love them and protect them like they’re one of their own until the moment it feels like they don’t really need us anymore, upon which the bedrock of backlashes is laid. The Weeknd’s performance tonight is utterly compelling, he’s a star, he owns the stage but it certainly feels like he doesn’t need anyone anymore.