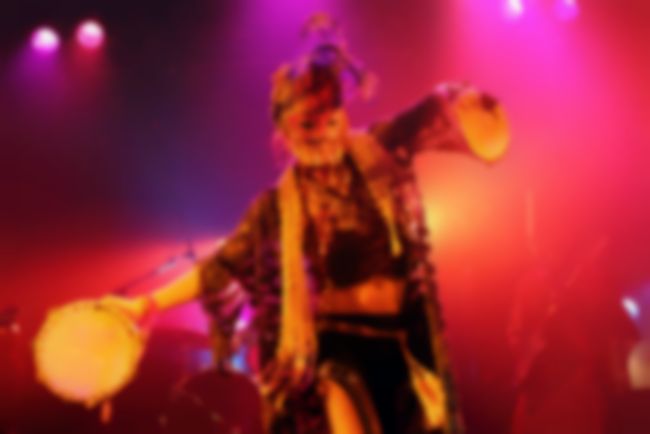 Music fans and their views on authenticity are peculiar. Quite often, it’s everything; just look at the horror with which the news that the Pixies would be going on tour with someone other than Kim Deal was recently greeted. No matter how accurate Kim Shattuck’s Deal impression is, and regardless of how varied the complaints it receives are, they’ll all boil down to one thing; “but it’s not the Pixies!”.

Similarly, Swedish septet Goat are not a mid nineteen seventies Nigerian funk band. But despite the masks, the copious feathers, and the back story about how they all grew up in some sort of atheist voodoo commune, the most interesting thing about them to me is how their audience seem not to care about whether they’re the genuine article or not.

Tonight’s show is being promoted by the fine folks at All Tomorrow’s Parties, and an ATP audience can be amongst the most muso a crowd a band could dread to play in front of (I wonder how they’ll take to Shattuck…). They should be tearing this stuff apart, especially because it has the audacity to not simply be music from another time, but from a very different place in the world.

Reactionary and culturally touristic? Goat would be sitting ducks if their hearts were sat in anything other than exactly the right place. It’s the fact that the Swedes are quite so well studied in their field, and hugely impressive both in levels of technical musicality and showmanship, that has me not worrying about whether they’re doing anything new or unique to them (they’re not, in honesty), but instead, dancing.

Their two singers are what start us all off, their invigoratingly off-key yelping on ‘Run To Your Mother’ and strained wails in ‘Goatman’ soon being joined in with by the front ten or so rows of the Electric Ballroom, who end the gig mimicking their dance moves – part belly dance, part séance – like they’re at the strangest, most enjoyable party of their lives.

The band behind them, who shine brightest on the lengthy, exploratory opener ‘Diabri’ and actually not at all inappropriately titled ‘Disco Fever’, are there in their cloaks, their hoods, their bone necklaces and with chiselled chests on show. They’re quite something to look at, and that’s all part of it – if you close your eyes, it’s nowhere near as special. But if you were to do that, you’d look odd wouldn’t you, people would dance in to you, and as anyone who has ever slid World Music out of its miraculous packaging knows, this is a band who are all about combining a sonic with a visual hit.

More than the sum of their parts, untroubled by any spurious criticisms as to their origin, Goat are the kind of spectacle that people prone to over thinking things should lose themselves in a little more often.