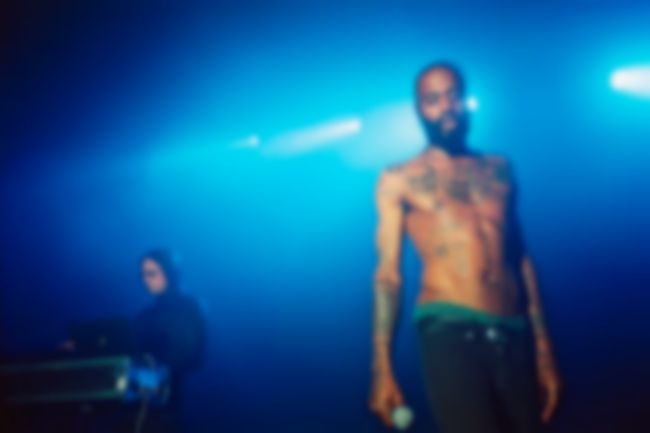 Where’s the drum kit? Seriously, why hasn’t Zach Hill set up his drum kit? Is he here? Won’t it… suck a bit, if he’s not here? What’s a Death Grips gig without Zach Hill? Stefan Burnett’s imposing and all, but can he really carry this off? This is a much bigger crowd than the last time they came to London. I really hope Zach starts setting up that drum kit soon.

Musings like that were commonplace as the Forum’s congregation stood awaiting the arrival of Death Grips. Had I not been party to a bit of insider knowledge (turns out Zach Hill had indeed stayed away from a Glasgow gig a few nights back previously), I’d have been as anxious as the others. Their show at the Electric Ballroom a few months back was astounding for many reasons, but a big one of those was Hill – watching him attack and destroy his miniscule drumkit like a possessed man taking orders from a cult leader was genuinely revelatory. I wanted to see it again, note for note, smack for smack, but at least I was prepared for something different.

Thankfully I’d not only been told that Glasgow weren’t privy to any Hill drumming, but also that it didn’t matter – the reports were just as rapturous. It turns out that Burnett’s way around a stage, (continually contorting his naked, glistening torso as he raps in a manner that has you worried that his throat might tear open to reveal an Alien-style monster), is more than enough of a visual hit to keep one entertained.

Silhouetted against the smoke and strobes, he couldn’t look more imposing. But unsung hero Andy “Flatlander” Morin – the one in Death Grips who nobody ever talks about but tonight is on stage handling everything that isn’t the rapping or dancing like a maniac – has enough technical nous and great tunes at his disposal to ensure that our musical appetites are satiated along with our visual cravings. No need to worry; Death Grips both look and sound amazing.

Live, Hill’s drumming was the most welcome distraction from a decidedly imposing set of tunes, but his absence this evening allows you – in the moments where Burnett isn’t screaming in your face – to focus on what else is going on in the music, of which there’s a baffling amount. Three albums (OK, two and a mixtape) in to their career, their style has developed in to something more diverse than breakthrough number ‘Guillotine’ – given a sound beating tonight – could ever have suggested. Though Burnett’s delivery of them is never at less than full throttle, comparing a song like the slowly revealed peril of ‘No Love’ to a hands in the air party banger like ‘I’ve Seen Footage’ reveals them to be a band with more subtlety than they’re usually given credit for. Whoever’s in Death Grips of any given evening and whatever song they’re chucking at you, they’re always on the attack. But it’s the way in which they vary their angle that really thrills.

Photograph by Howard Melnyczuk with a Lomo. Full gallery here.