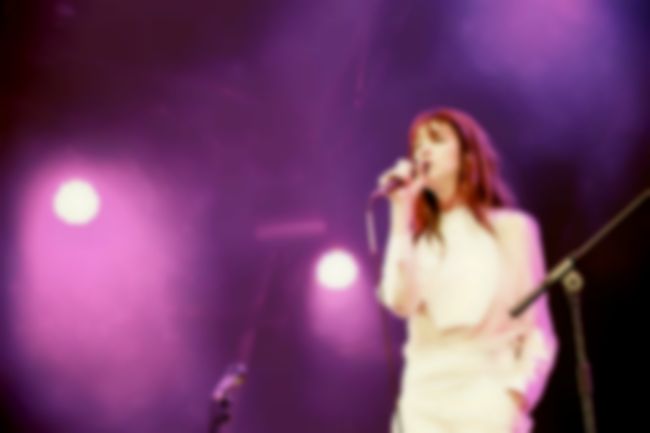 The Anglo-French daughter of Jane Birkin and Serge Gainsbourg, Charlotte Gainsbourg released her first album, Charlotte Forever, when she was fifteen, and didn’t release her second album until twenty years later. Although Gainsbourg’s been recording music since 1986, she’s only been playing live shows for a couple of years. An old star perhaps, but a young performer. This is reflected in her music and her demeanor; there’s a childlike quality to her voice, but her stage presence has a distinctly adult poise.

Flanked by her band, Gainsbourg steps onto the stage at Somerset House dressed head to toe in white, save some black stiletto-heeled ankle boots. Bathed in bright blue lights, she begins her set with ‘Terrible Angels’, her latest single off the Beck-produced album Stage Whisper. Gainsbourg sings as softly as she speaks, and the thundering drum and bass of her band overpower her voice, but it’s a lovely song.

After ‘Terrible Angels’, Gainsbourg sings ‘Greenwich Mean Time’, and ‘Jamais’, off her albums IRM and 5:55 respectively. Unfortunately her poise resembles timidity; I have to strain to hear her voice and it seems like she’s practically muttering into the microphone. I’m beginning to understand why she called her most recent LP Stage Whisper.

Tonight’s opener, Connan Mockasin, joins her on stage and they sing ‘All the Rain’ together. Then, she really hits her stride with ‘Got to Let Go’, a male-female duet which was originally written and sung on Stage Whisper with Charlie Fink of Noah and the Whale. Containing some of the most subtly charming lyrics of any of the songs in Gainsbourg’s catalogue, she performs it beautifully with a subtle but forceful sweetness absent earlier in the set.

She follows up ‘Got to let Go’ with ‘Heaven can Wait’, one of the most Beck-sounding tracks on Stage Whisper. Then, her guitarist turns to her and says: “Charlotte, I think it’s time for a cover.” Gainsbourg then delivers a rousing rendition of David Bowie’s ‘Ashes to Ashes’, her band twisting the instrumentation and rhythm so that it’s a little more tribal, a little less disco.

She then plays, ‘Don’t Forget to Forget Me’, another Serge-Charlotte oldie, which is a clear crowd favorite. It’s apparent that even as an adult, Charlotte Gainsbourg the Singer is not just about Charlotte but is also about Serge.

“Thank you very much,” she says in her slightly accented English. “Goodbye.” But the crowd calls her back to the stage with chants of “Charlotte” and she obliges their requests for more music, delivering pitch-perfect renditions of ‘Memoir’ and ‘J’taime.’

Gainsbourg’s set lasts for just over an hour. She ends with ‘Paradisco’, off of Stage Whisper. On the album, Gainsbourg murmurs her way through the song, but when played live it turns into a sprawling French pop anthem. Ultimately, Gainsbourg is not so much a singer as she is a star; although on the whole her performance was average, she can hold her own as an icon.