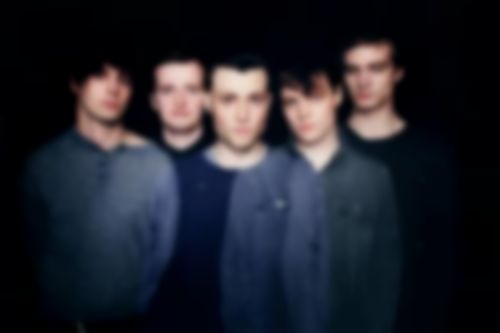 The Maccabees are slowly starting to make their mark on the British public after the warmly received second album Wall of Arms made it to number 13 in the charts, the recent single ‘Love you Better’ made the notoriously influential Radio 1 playlist and a summer of festival appearances included a big crowd on the Other Stage at Glastonbury. Although a few tickets were still being sold on the door for this gig, the 1500 capacity UEA is a significant step up for the band on what is their biggest headline tour to date.

The Lyre Birds were the support act tonight and having The Velvet Underground’s ‘Venus in Furs’ as walk on music was a good start. They were certainly at their most interesting when dark and brooding guitar lines built up an atmosphere in the songs, but by the midway point in there half hour set there was an air of predictability about them. In virtually every song mid tempo verses gave way for choruses that were striving for epic status akin to The Killers, but missed the mark by losing detail in a wall of sound.

The Maccabees churned out 18 tracks in a blistering 75 minute set, with a varied mix of old and new. The slow burning ‘No Kind Words’ got things going amidst dark moody lighting and exploded half way through for the “if you got no kind words to say, you should say nothing more at all” refrain. A brass section, which was present for much of the set, entered the fray for ‘One Hand Holding’. Debut single ‘X-Ray’ followed and sparked a flurry of crowd activity. Recent single ‘Can You Give it?’ received a similar reaction but ‘Young Lions’ lost some of the emotion and depth found on record giving way to a rawness more in keeping with their debut album, ‘Colour It In’. Orlando Weeks’s vulnerable sounding voice came to the fore on the brilliant ‘Wall of Arms’ and it is a vulnerability that he shows in a way that makes him look almost apologetic for being on stage and seems quite happy to let hyperactive guitarist Felix White do the showman bit.

Old favourites ‘Latchmere’ and ‘Precious Time’ provided mass sing-a-longs and the young whipper-snapper crowd even found cause to mosh and form a large circle pit for the lyrically poignant ‘Kiss and Resolve’, which was quite odd. They managed to refrain themselves from over-exertion in the lovely ‘Toothpaste Kisses’, which proved a welcome change of pace before ‘Lego’ and ‘First Love’ closed off the main set to rapturous applause.

‘Bag of Bones’, album closer from ‘Wall of Arms’ was understated and atmospheric but was cut slightly short so didn’t have the full impact of the recorded version. After ‘Seventeen Hands’, ‘Love You Better’ finished things off in triumphant fashion as the UEA rejoice in seeing a band on top of their game and who fully justified the step up to venues such as these.