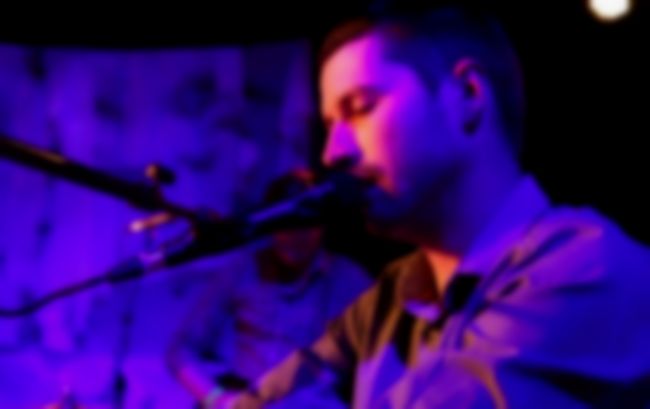 Gone are the days where Sean Carey, known to most as S. Carey, is defined by his involvement in Bon Iver, who of course need no introductions. It was an understandable initial focus point for reviews given that most of the agency for the latter is assumed by Justin Vernon. But four years on since the debut EP All We Grow, Carey has surpassed buzz-words like “side-project” and has gained his own following for his chillingly beautiful, multi-sensory compositions that have recently come into fruition in the form of the debut album Range of Light. Tonight Carey and band showcased the album beneath the high ceilings of Shoreditch’s Village Underground.

Support tonight comes from the Anglo-American married duo Rue Royal, who have joined S. Carey for the whole European tour. They’re clearly an apt warm-up, with their powerful harmonies and dark-dipped folk textures. Although being a duo is clearly part of their appeal, it does feel at times that even one more touring member would improve the fluency of their multi-intrumentation, a style that seems to characterise the evening. Their anecdotes- such as their recent cameo on a German crime series- are amusing and open up the dynamic of the show; by the time S. Carey comes to stage there is a very sweet and friendly atmosphere in the Village Underground.

Carey and his four-strong band walk onto the stage in almost complete darkness as they sink into the track that is as fragile as its name, “Glass/Film”, from the recent full-length Range of Light. It has an almost lullaby quality to it, which, as beautiful as it may be is slightly too sedate to open on. Without word they progress into “Creaking”, which takes the softness of the first track but adds some more interesting chord-progressions to spark the audience up. It is this unpredictable direction of melodies that make S. Carey special; they creep out of nowhere and dance hypnotically with your emotions so that when the dance is up and the song over you feel cleansed. The scintillating “Crown the Pines” bounces spitefully in and out of 7/4 and regular rhythms, and Justin Vernon’s falsetto undercurrent on the record is adopted effectively by Carey’s guitarist. The harmonies are on point for “Mothers” too, from the first EP All We Grow, which arguably relies on this kind of vulnerable vocal play.

Things take a welcomed punchier oomph for “Action”, which is as moving as the last but with more abrasive textures and sees Carey join his two other percussionists for a multi-textural release. Silhouetted by blades of white light, the performance is becoming visually as chaotic as it is audibly, climaxing quite differently from the velvety and dulcet progressions earlier in the set.

The highlight of the set comes in the form of “Chrysalis”, with its Death Cab for Cutie-eque drum brushes, paced composition and gentle pulses. Carey is a maestro of evoking synesthesia, and looking round the crowd -from couples getting close to those on their own with closed eyes- it’s clear that “Chrysalis” is taking people places. With a slightly different tone to the rest of the album, it sits as a b-side, meaning its probably the first time some have heard it, and there is a very touching effect because of it.

After ending on a cover of Bjork’s “Unravelled”, the band return for a two song encore. Carey resumes his role as a percussionist as he sits at the drums for “Neverending Places”, spruced up a little from the album’s version, which is so classy it sounds like it could soundtrack a scene in James Bond in which he’s snuggled with a beauty in a mountain cabin. It would make for a fitting ending, but instead Carey wants to “throw a curve ball” and end on a bass and vocal cover of Frank Sinatra’s “I Fall in Love Too Easily”. His croons would make the rat-pack proud, and no doubt the two-minute bass solo is impressive, but it starts to feel a bit like an awkward open-mic session, and Carey would have done better to save “Into the Dirt”, which from a wooping “yeeaah"s seemed to be the crowd favourite.