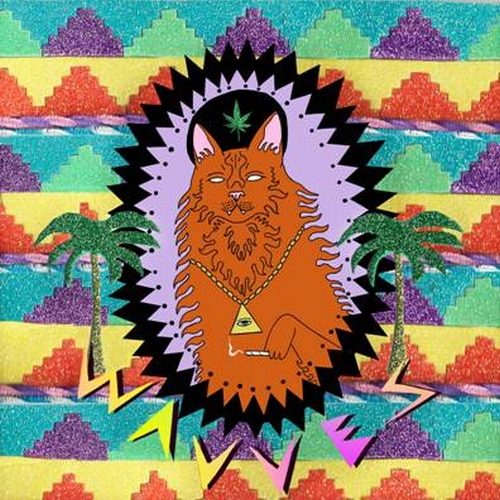 Nathan Williams has had his fair share of bad press in recent years. Portrayed as a bratty little diva that just happened to make so-so no-fi records in his room under the moniker Wavves. With his previous efforts, I always felt that the production wrapped up his music in a sort of security blanket, not giving us an accurate glimpse of what he was capable of. ‘So Bored’ and ‘Weed Demon’ showed that Williams certainly knew how to write a catchy tune but it is only now, on King Of The Beach, that Williams steps out from behind the fuzz and distortion and shows us his hand.

The dedication is evident from the offset with the title track starting off with a crackle of static. Power chords and thundering drumming surround Williams’ mission statement; “you’re never going to stop me, king of the beach”, a message of intent showing that Wavves mean business; beach punk business. Production is still rough, but now it doesn’t sound like everything is recorded unwater by a broken hydrophone and the vocals definitely benefit the most from this. The breakneck rollicking that is ‘Super Soaker’ continues the punk ethos, charging along at a rate of knots.

As refreshing and brilliant the opening of the album is I could not help but think, “I can’t listen to a whole album of this”, which is probably why I could never stomach one of Wavves’ previous efforts. ‘Linus Spacehead’ is more restrained with a chorus consisting of Williams doing his best beach pop vocal harmonies. It is not until ‘When You Will Come’ that it is obvious how much Wavves have grown. It may not be the most urgent or gripping track on King Of The Beach but that is exactly why it benefits the album as whole. ‘Just Like Honey’’s drums take the front seat and help to give the listener a rest bite from the breakneck and urgent punk heard thus far. ‘Baseball Cards’ is equally as refreshing as it ushers in a new dreamlike quality with synths the most prominent feature.

The remainder of King Of The Beach ventures, mostly, on the punkier side of Wavves’ sound. Lead single ‘Post Acid’ is by far the most pedestrian song on the album. It amounts to nothing more than average pop-punk and sounds like, dare I say it, if Blink-182 listened to The Beach Boys and not Screeching Weasel. That rare miss aside, more highlights include ‘Green Eyes’ and ‘Mickey Mouse’. The latter merges Williams’ token warbling with screeching guitars and gorgeous breakdowns. Another late gem, ‘Convertible Balloon’, could have easily been taken from Wayne Coyne’s box of psychedelic wonders. It certainly took me a little by surprise. To top it all off, closer ‘Baby Say Goodbye’ is an absolutely perfect finisher. Its slow start builds up to a thunderous finish. If that doesn’t make you smile/dance/freak out while looking at your hands, then nothing will.

As you can probably (definitely) tell, I didn’t really except much from King Of The Beach or Wavves. I had simply written off Williams as a not very impressive one trick pony. How wrong I was. Williams has completely redefined his sound and has produced an album that ventures so far away from his comfort zone that I cannot help but admire his risk. This indicates that Williams is no longer a niche one trick pony nor is he a flash in the pan. King Of The Beach is nothing short of a masterpiece for Wavves, and one that has triumphantly proved this prejudging writer extremely wrong in his assumptions.