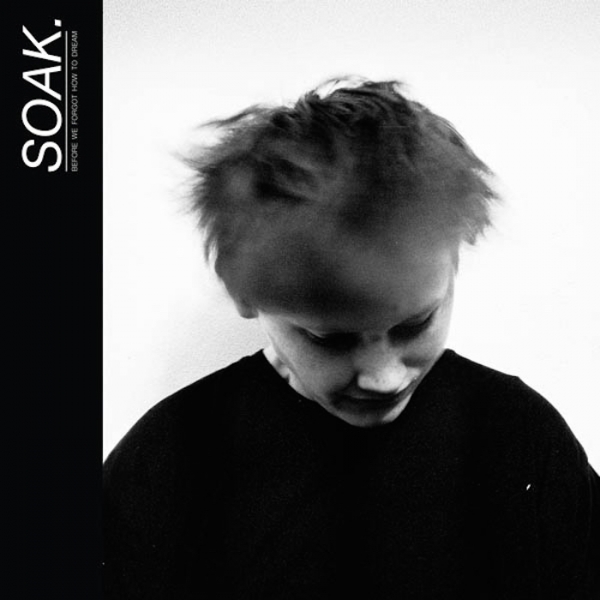 ​Derry-born Bridie Monds-Watson is the teenage talent behind the project SOAK. Despite, or perhaps because of her youthful outlook, Before We Forgot How To Dream is an insightful look into her soulful disposition and a Narcissusian caution for the rest of us elderly sceptics.

Comparisons ranging from Cat Power to Daughter lay the groundwork for understanding SOAK’s melting pot of heartfelt passion, melancholia and sparks of triumphalism. Throughout, her bluesy, textured guitar is complimented with drum crescendos and the strains of a pained violin which are all threaded together by a tender vocalist. The album passes at a slow but sure pace, with the odd driving rush of blood to the head on tracks such as "Hailstones Don’t Hurt".

As a young woman who has grown up in a world that focuses on the cult of personality and ego, Bridie is clearly preoccupied with debunking the myth that being ‘somebody’ is a panacea for life’s problems and complexities. "B a NoBody" compliments the philosophically titled instrumental "If Everyone Is Someone – No One Is Everyone". “Be a nobody/ just like me” she sings as we are left to grumble jealously at the irony.

Tracks draw on the bonds of family and friendship on a more sophisticated level than you might expect from a teen on debut. This is patronising, but frankly the music industry is not pervaded by deep-thinking and thoughtful adolescents, although some do of course exist. Her brother inspires and links "B a NoBody" to "Oh Brother", ‘SHUVELS’ seems to dwell on a metaphorical burial of a previous incarnation of herself, while her parents’ relationship also provides insightful material.

Irreverence for capitalisation and spelling in the album’s song titles belie her mature ability to wield the language within. In a time where linguists believe it may be the emoticon which becomes the picture that paints a thousand words, SOAK manipulates words to mean more than they typically convey. We know to what "Blud" refers but it suggests a whole lot more with her spin. Similarly, "SHUVELS" is blunt juxtaposition to the delicate subject matter where “a ghost... is haunting me” and “heaven’s collapsing”. The “My Brain” opener probably has more to do with the ironic ‘double bunny ears’ finger gesture, than the ‘grown-up’ convention to use quotations to justify oneself (like the one wot I just used in the previous sentence and will use in the next paragraph.)

To continue to dig, the semantic separation of the signifier and the signified in these titles demonstrate Monds-Watson re-engineering an antiquated system of self-explanation to make herself more clearly understandable and understood by her generation. As Ms. Everdene (the Thomas Hardy one) says: "It is difficult for a woman to define her feelings in language which is chiefly made by men to express theirs." Again, with her distinctive accented singing voice, everything is not quite as straight-forward as it appears on the lyric sheet. While the Irish twang sets her apart in a sea of female singer-songwriters, it also creates odd situations where certain phrases could be heard with a number of different interpretations. It’s not a case of incoherence, but of unlocking language. The Land Before Time Forgot-tattoed skateboarder may or may not intend to redefine anything, but it’s a nice dream.

"Oh Brother" not only contains the LPs titular lyric, but also forms the emotional heart of the record - despite its billing at 13 of 14 tracks. In an elegiac series of pleading vocals, her moody blues guitar gives way to a bass drum which pulses life back into what seems to be dying. You can hear every finger-slide as a refreshing 42-minutes winds down.

Age shouldn’t matter, but when this kind of album arrives from the mind of one so young - who grew up listening to her parents Joni Mitchell collection - it can’t but increase the admiration for the finished product. It is very consistent, and if anything that may be what holds it back from hitting even higher notes than it already does. As ever, those who love that sound will wax-lyrical, while criticisms that some tracks sound the same and are depressing might reduce a prospective audience.

Before We Forgot How To Dream is subtly uplifting, astute and speaks in the diction of a youth that may be tired of being talked at, rather than to. An appearance on Jools Holland under her belt and a world tour half-finished with only the UK leg to go, SOAK seems to be ably wetting everyone’s appetite for the future.