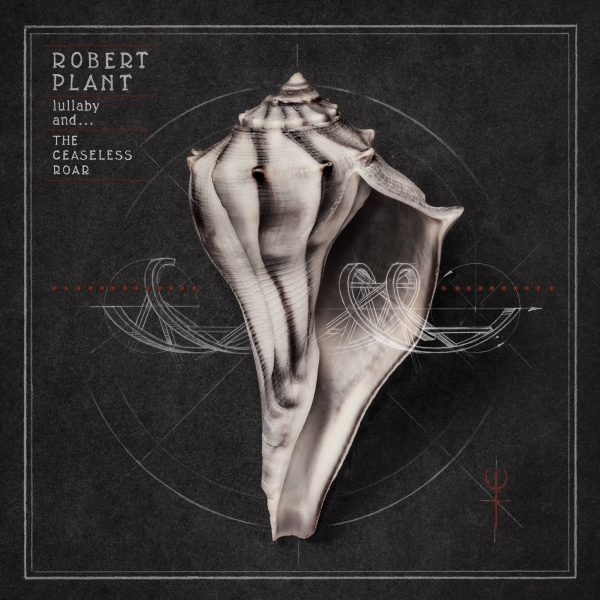 Robert Plant first found fame with a relatively successful rock act called Led Zeppelin. This new album, lullaby and… The Ceaseless Roar, finds our protagonist back in sonically exploratory mode – after detours through honeyed country with Alison Krauss and off-kilter rock with the Band of Joy (the Low covers were truly inspired), he finds himself back in the realms of his uncelebrated, underloved 2005 gem Mighty ReArranger. Like that record, Plant and his merry band of mercenaries plunder all kinds of “-beat”s to superb, startling effect. As a serious devotee of Mister Plant’s recorded works (the practically perfect Houses of the Holy is amongst my favourite & most-played records), I feel at liberty to tell you that this is probably his most solid, intriguing collection this side of his mighty covers record Dreamland. I promise.

If you, like many, go into lullaby with the simple hope of it not being a duffer (85’s stale Shaken ‘N’ Stirred still remains Plant’s least-appetising collection), you will be blown away. If you go in to it high on the shiny new remastered Zep records, you’d do well to adjust your expectations somewhat (go back and listen to Mighty ReArranger, it’ll do you good.) The albums opens with a haunting, post-digital update of banjo standard “Little Maggie” – and if banjos don’t already put you in comfortable territory by reminding you of Led Zep (and Delivrance for that matter), then Plant’s breathy croon will ease you in no sweat. The bubbling, squelchy electronic undercurrent pulsing throughout the track (and, indeed, the record) lends an odd, avant-garde flavour to the cut – a welcome one, I might add.

Second track “Rainbow” throws in some (sweetened) Waits-ian Neubauten percussion sounds in the midst of a tender ballad where chiming guitars and Plant’s golden groans bounce off each other, completely enveloping the listener. The track opens with, and is underpinned by, Plant cooing beautifully amidst the peaceful desolation that his band conjures around him. He has previously shown an interest in bands like Low (covered them) and The Cure (covered them and borrowed a guitarist from them), so the fact that he is able to imbue his tracks – and voice – with an atmospheric density isn’t that surprising. However it can catch you off-guard, that someone so renowned and celebrated for caterwauling rock and classicist blues is, at heart, a sonic revolutionary. No amount of solo albums will reduce the level of shock and awe produced by hearing this older, wiser Rock God craft sweet, contemporary and, most importantly, relevant pop music. “Pocketful of Golden” offers a sprawling, kaleidoscopic psychedelic soundscape framed by Plant’s seductive murmuring.

Following track “Embrace Another Fall” is the true star of the album: A white-hot electric guitar stings and hisses among crashing, sonorous percussion and insistent strings. The track could (seriously) have been culled from the latest Swans record, such is the bone-dry desert-blues expanse offered by the band. Plant’s trademark barechested, bell-bottomed, lion-maned, gung-ho brand of slinky rock ‘n’ roll is here, too (kinda): “Turn It Up” is another album highlight, showcasing as it does a gargantuan guitar riff and clattering drums. Did someone say “Whole Lotta Love Part II”? Tender, bleary-eyed ballad “A Stolen Kiss” precedes the Gene Clark Americana of “Somebody There”, providing more evidence (should any be needed by this point) that Plant’s ability to cast new, distinct forms of expression from a molten blend of his life-long influences. Fans drawn to the record by the Zep factor will become positively clammy at the sound of Lead Belly’s “Poor Howard” - if the fiddle were replaced by some guitar pyrotechnics, you’d have a fine Presence-era slice.

The mildy Gothic, heavily Alt rock of “House of Love” soothes, while “Up On The Hollow Hill (Understanding Arthur)” scintillates – both cuts are stylistically contrary, but thematically necessary. Plant’s tendency to alternate between tenderness and wildness is none more evident here – dig the fleshy beat on “Hollow Hill” and tell me you’d expect it on an album this deep into the man’s career. Closer “Arbaden (Maggie’s Babby)” reprises the first track, but opens with a scarily Moroder-ish blip-scape before descending into full-on freak-out mania, while the showstopping performance from Juldeh Camara is truly breath-taking.

Congratulations must go to, primarily, the band. Justin Adams, Skin Tyson, John Baggot, Billy Fuller, Dave Smith and of course Juldeh Camara are, undoubtedly yet somewhat sadly, outshone by the name on the marquee but offer a perfect set of sympathetic sounds for him to work with. Congratulations are also in order for the insanely talented Tchad Blake, whose mixing for the likes of Tom Waits and the RZA has gained him quite the rep. Here Blake shows himself to be the best secret weapon (and de facto producer) for a band this side of Chris Walla.

This is a riveting, first-rate record from a man who has made quite a few of them. It sits side-by-side with his career highlights with ease – you can tell, when listening, that this is the artist capable of and renowned for genius performance, relentlessly engaging artistry and a tendency to surprise. lullaby and… The Ceaseless Roar won’t replace Houses of the Holy as my favourite record to bear the name ‘Robert Plant’, but if you’re not fond of Led Zeppelin and/or you’re coming to this record with little idea of what to expect, it could be the best thing you’ve heard from the man. Long may he continue to use recorded sound as a means to tease, to hypnotise, and to enthrall – after all, he’s only been doing it since 1968.