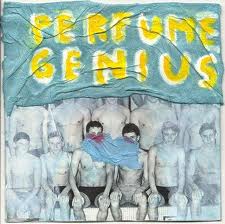 Perfume Genius’ spectral, half-real, half-dream debut Learning was one of the minor joys of 2010 and even made some inroads towards actual popularity with its sharp, shimmering shock of a lead single ‘Mr Petersen’. That the album was pretty, pretty strange and prettily sad is a given – but it also lacked the kind of solidification of ideas, the singularity of intent and conclusive songwriting that make a truly memorable, even classic album.

For his follow up Michael Hadreas suffers none of the niggling reservations that made his debut a half-diamond, none of the wavering lo-fi tendencies that muffled his stunning, soft crystal voice in the past. Put Your Back N 2 It, utterly ludicrous title and all, is one of the most wonderful records in recent memory.

From the hard breath and high tension piano notes that pick out the opening of ‘Awol Marine’ – the only track in which the vocal is mostly unintelligible, leaving you searching through the bold instrumentation like rubble for meaning – right through to the closing line (“Don’t you stop, ‘till you know you’re gone”) and 30-second ambient fade of closer ‘Sister Song’, this is an empowered, almost impossibly tender, superbly sexual record.

The assurances of the Leonard Cohen-like plucked acoustica of ‘Normal Song’ – “No violence, no matter how sad/Can darken the heart or tear it apart” – are representative of Hadreas’ new-found assuredness and comfort as a potential sexual role model; even if, as on the brutal, fragile ‘17’ he discusses self-loathing and body dysmorphia in terms as cutting as “String it up on a fence/Cover it with semen (cement?)/I am done with it”. While he still has his moments of weakness, they are put out there in song to be shared and to be used as beacons for those who may feel entirely alone.

His instrumentation is as inspired by Angelo Badalamenti’s work for David Lynch as on his debut but again it’s crisper, and more pronounced. As much as form follows content Hadreas is not speaking a new language here, it’s simply that his annunciation has become that much better.

‘No Tear’ would stand a Prince cover rather well, it’s split demon/angel vocal lines and resilient survival-at-all-costs sentiment a delectable, sinewy delight; while ‘Take Me Home’ is a soulful tale of subsuming oneself in lust – “I will be like a shadow of a shadow…of a shadow/For you” he soars, with one of the most memorable melodies of the whole album.

It’s just all so achingly soft, so bruisingly powerful. Ballads and torch songs of almost unknowable longing, like the huge, canyon-like piano anthem ‘Hood’ lay alongside poems of almost unbearable loss and loneliness like ‘Dirge’, sleeping next to paeans to possible futures as yet unrealised such as the near-angry cry for liberation ‘All Waters’.

It’s a simple case that every time his hands hit the keys, every time those angelic backing vocals erupt across the sky of his sunset music, it is a wonder to behold. The Sufjan Stevens jag of ‘Dark Parts’ is an ideal example of just how utterly brilliant this record is – a stadium torch song told through a dark, unbearably sad but suddenly self-assured voice. “I will take the dark part of your heart into my heart” croons Hadreas, the sound of pure, blinding honesty, absolute self-sacrifice in every note he speaks.

Ultimately this is an album that could draw comparison with the likes of Mr Stevens, perhaps Plush, perhaps Bon Iver et al but Hadreas has more potential to find himself in the company of the likes of Paul Simon, the aformentioned Cohen, perhaps Nick Cave as a master of melody, an unrivalled wordsmith and the originator of a singular sound that many will imitate but few will equal.

It’s a near perfect album and Perfume Genius has, ever so swiftly, made the transition from interesting outsider to fully-realised musical hero.