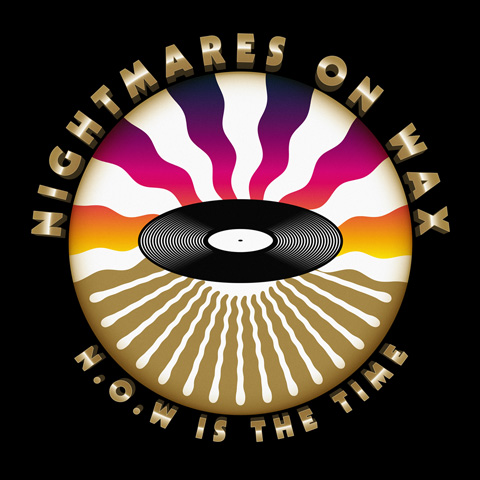 Over the past 25 years, Nightmares On Wax has been an inescapable name for anyone familiar with the intricacies of UK Hip-hop and its various sub-genres. Even if you’re sitting there reading this thinking ‘who is this mysterious artist working under such a disturbing epithet?’, if you have been to a bar within the past 20 years, you’ll have heard the music of George Evelyn and his collaborators.

N.O.W Is The Time is an assortment of N.O.W’s greatest hits, collating the fragments of a fertile and inventive career into what might be regarded as some kind of holy scripture of trip-hop. The double disc collection documents classics which at the time shaped the sound of the 90s and have now come to crystallise certain moments in the evolution of British underground music. Take the 1990 release “I’m for Real” - its pumping bassline and drum beat is so evocative of the techno and house of the time, but its mechanically insistent synth pattern and fragmented drum samples now shine like a beacon, signalling the beginnings of developments in dance music that would define the following decade. Of course, the album closes with the unforgettable “Nights Interlude”: the soundtrack to so many nights in dark cocktail bars and, by now, countless TV montages. With its Quincy Jones sample, it perfectly embodies the sensual, soulful sound that marks so much of N.O.W’s work.

If a brief introduction to N.O.W is simply not enough, the N.O.W Is The Time: Deep Down Edition will be released in tandem with the greatest hits collection. This vinyl box set includes re-works by the likes of Mr Scruff, Loco Dice and Morgan Geist. “Aftermath” takes on three new incarnations, thanks to Acid Mondays, LFO and Special Request. All three tease out various strands of the surreal within the track, each forcing you to lose connection with reality in its own way, be it through veils of dark reverb or through a euphoric connection to pure rhythm. The sheer variety of genres in this remix collection is just one indication of the breadth of influence that N.O.W has exerted over the past two decades.

These releases celebrate a career the like of which most artists can only dream of: N.O.W can still gain half a million views when he plays a Boiler Room set and his touring schedule seems more hectic than ever. XCongratulations, George Evelyn, on sheer domination for a whole quarter of a century.