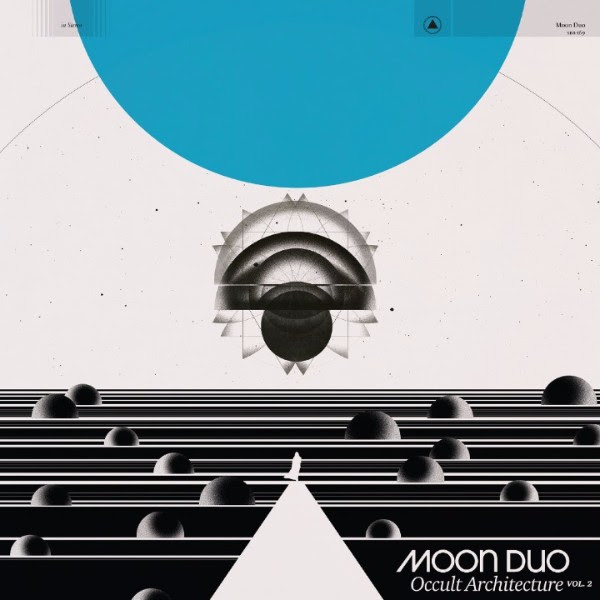 The second half of a drone-edelic saga that began this past February with Occult Architecture Vol. 1, the serialized story of Moon Duo’s fourth album comes down gently.

Steeped in music with a history of unpredictability, Moon Duo have reached a cosmic level of consistency. Guitarist Ripley Johnson (also of Wooden Shjips) and keyboardist Sanae Yamada have avoided the steady rain in Portland, Oregon, since the end of the ‘00s by staying dry in the basement sculpting thick, hash-hazed compositions. Already close to being fully realized on early albums like Escape and Mazes, Moon Duo are one of those bands that serve as a model example of the “if it ain’t broke, don’t fix it” ethos being successfully implemented.

Yamada and Johnson do allow themselves plenty of room to tinker -- or, in the case of Occult Architecture, expand. Despite the color-coded covers, this pair of platters may not exactly be their Use Your Illusion I and II, but the ambition always peeks out from behind an undertaking such as this. What they have achieved here to a commendable extent, though musically the halves are far from polar opposites, is a compartmentalization of their dueling harsh and mellow impulses.

The song titles on Vol. 1 made it clear what side of the force it represented: “The Death Set”, “Cold Fear”, “Will of the Devil”, et al. “New Dawn”, “Lost in Light”, and “The Crystal World”, on the other hand, frame the easier flow of Vol. 2. “New Dawn” is the bridge between the two, with a viscous guitar solo dripping over the grinding sandpaper groove. “Mirror’s Edge” straightens out Krautrock’s languid fringe. “The Crystal World”, a ten-minute pastel retro-futurist finale, is new astral territory for them, sending Occult Architecture Vol. 2 off on a path of further exploration.