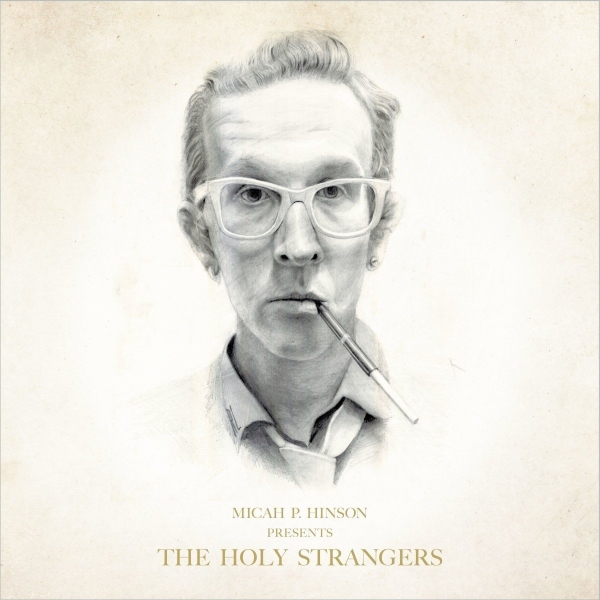 Tennessee born and Texas raised Micah P. Hinson’s new album Presents the Holy Strangers is described by the artist as being a “modern folk opera”. This is perhaps the only way it could be summarised, as it transcends genre. The songs move from instrumentals to country to spoken-word, sometimes depressive and sparse and sometimes fast and engaging.

A slow, rousing instrumental “The Temptation” kicks the album off, tempting the listener in with a slow crescendo, teasing notes and melodies towards the end of the four minute opener. It leads into “The Great Void” which is classically Hinson – a long and developed song which sets the scene of the family that the album follows. Throughout the record, we see the age-old themes of birth, marriage, children and death, but presented in an original and thought-provoking way. The story is absorbing, but not glorified. Hinson’s yarn-spinning ability that was so beautifully displayed in previous albums has not mellowed – it’s here, and rawer than ever.

While the storyline is consistent throughout, it’s somewhat strange how each song is so different – there’s the Johnny Cash-style “Lover’s Lane”, the weary “Oh, Spaceman” and the seven and a half minute long spoken-word core of the album, “Micah Book One”. The latter sounds like a twisted Bible parable being preached by a father in a strict fundamentalist Christian household – which, interestingly, is the situation in which Hinson grew up.

While the story told is captivating, it's the instrumental tracks which reel you in. Five of the fourteen tracks are wordless, with “The Years Tire On” standing out with its orchestral crescendo and repeated melody. If you hadn’t seen the title of this song there would be no other name for it but “The Years Tire On”, with its weary and trudging tones. At the same time, it’s exhausted yet rousing, painful yet uplifting. When Hinson goes on tour with a full band in September, audiences will be guaranteed captivation by its majesty.

Towards the latter half of the album, as relationships in the story break down, the songs follow the same path. The tunes become discordant, and repetitive backing tracks disappear only to be replaced with clashing notes. It leads to “The Last Song”, in which Hinson croons over and over “These are the final words I'll sing for you / these are the final words I'll give to you”.

But Hinson is not done. In the three tracks that follow, there’s still a death and a suicide to come. “The Memorial Day Massacre” instrumental is suspenseful and uses clashing strings against a regular beat, perhaps the most musically interesting point on the album. It's in this track that we can hear how the album was recorded at a basic level, only entering the digital realm once pre-mastering took place. The whole of Presents the Holy Strangers is created incorporating ancient reel to reels, analogue keyboards and old Tascam and Yamaha desks, almost giving it an unfinished, demo-like feel.

Hinson may have gone back to a simpler time when making the album, but his writing is as evolved as ever. While not as personal as 2014’s album Micah P. Hinson and the Nothing (how could it be, given that at that time Hinson had been in a near-fatal car crash and was piecing his life back together?), the album’s fiction is deeply relatable on many levels.

Hinson’s “modern folk opera” ends on what sounds like an updated version of Kumbaya for the pessimistic. The original song, a simple appeal to God for help, includes adjectives like laughing and singing, yet Hinson takes us back through the sad events of the family in the album story: someone’s fighting, someone’s hurting, someone’s screaming, someone’s burning, someone’s died, no one’s cried – Oh Lord, come by here.