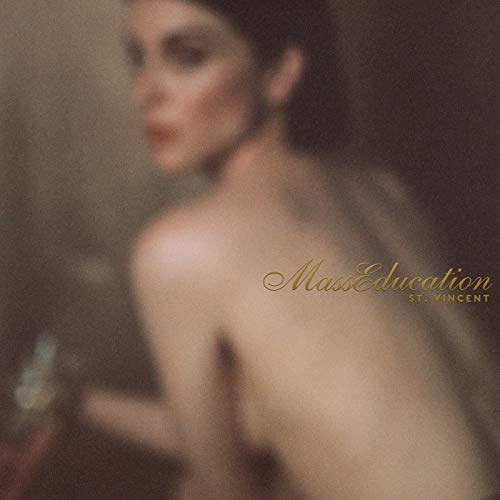 Love is an angel disguised as lust. And her name is Annie Clark.

Clark’s latest masterpiece, MASSEDUCTION, was more than just a hit here at Best Fit – in her beautiful review, Claire Biddles gave the record a glowing, incredibly thoughtful dissection. She described it, and I’m paraphrasing to some extent, as a maximalist fantasia of excess, sexual freedom and limitless creativity. And, of course, she was completely correct to give it a near-perfect rating. But in many ways, the new version is better.

MASSEDUCTION is a Friday night in a Berlin strip bar – all-encompassing, all-consuming, all-arousing yet strangely militaristic (and sexier as a result). There are people wearing shades indoors, it reeks of latex and sweat, effortlessly blending lines between gender, sexuality and identity.

MassEducation, however, is the complete opposite – despite being constructed of exactly the same songs. Annie Clark, you bloody genius. MassEducation is an evening drive, a neon-light in the darkness, a cocktail bar on a Wednesday. It’s the aloof, debonair younger sibling to its bloody-minded, red-blooded sister. MassEducation smokes outside. It prefers white wine to red. It eats well. It’s an antidote to modernity where the original adhered to all of the rules of ‘now’. There are no winks, no nudges. There’s no confusion: MassEducation is pure, emphatic. Clark strips all of the excess from MASSEDUCTION – the Fripp-ian guitar skronks, the digital sheen – and bestows upon the new versions her own, sincere power.

Let’s talk about the new versions. “Los Ageless” is probably the standout on both records. On this record, it’s a dainty, soulful piano ballad that doesn’t mess with that instantly-recognisable, brain-tickling hook. It’s was a jewel, it’s now a precious metal. By resisting the urge to change it completely, Clark shows that her creative instincts have remained just as sharp despite the fact that she’s spent the last year touring the hell out of these songs.

“Sugarboy” carries over to the new record incredibly well, too. It plays in a more cinematic, restrained sandbox than the original – but it sounds no less intensely liberating. “Masseduction” is also great here. On the original, Clark made it plain – if anyone was unsure by that point – that she was revelling in the sense of freedom she found in sex. Specifically, she didn’t, couldn’t, and wouldn’t turn off what turned her on. On this version, Clark’s voice takes on a new-found tone, and a raw sincerity. By accident or design her voices frequently evokes Patti Smith here, too.

The “Savior” here is, surprisingly, sexier than the original. It starts slowly, sensually, longing and aching, before building to an incredibly intense crescendo. “Pills” takes on a frazzled, deranged angle that makes you think of the earlier St. Vincent material – specifically the drugged-up Disney of Actor. Frequently MassEducation sounds like a love letter to the fans of her earliest material – the ones that have hung around for this long, at any rate. “Hang On Me” is another track that could have been on Actor –it's tender, loving and beautifully emotional.

On the cover of this new version, we see Clark with her back to the camera, seemingly naked (or at the very least topless): it’s an apt visual metaphor for the songs that we find within MassEducation, as trite as that may sound. Look a bit deeper and it’s more than that, though: it’s in soft-focus, hazy and unclear. And it’s actually her this time: the legs and ass on the cover of MASSEDUCTION belonged to her friend. I think this is Annie telling us that this version is closer to the real her, but she’s still keeping something back. She’s nude, but covered. The photo is revealing, but not necessarily erotic. It’s a magnificent cover to a magnificent record.

Finally, I’ll just say that I think MassEducation hangs together better than its predecessor. It’s cleaner, with less sharp edges and smoother transitions. It’s precise where MASSEDUCTION was deliciously sloppy. But in real terms, they’re both as near to perfect as a pop record is going to get these days – incredibly perceptive, personal and inviting with clever lyrics sitting on beautifully inventive melodies. Both albums are great. Both albums deserve all the awards.