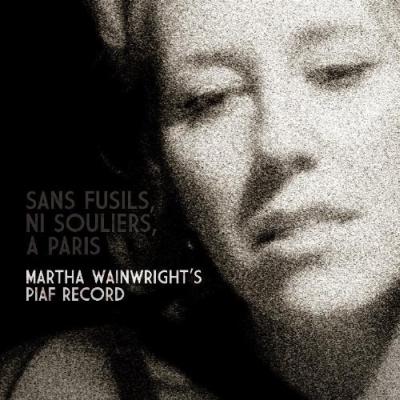 Martha Wainwright’s latest release is not only a tribute to the cultural icon that is Edith Piaf, but is heavily imbued with the spirit of her mother, Kate McGarrigle who recently passed away. Wainwright has spoken in length about how much her mother was involved in the making of this live album, helping her choose which Piaf songs to interpret, as well as providing backing vocals and accordion. Having been totally captivated by Piaf from a young age, Wainwright’s latest release was recorded live after a series of intimate gigs in New York last year. Akin to her brother’s famous Judy Garland at Carnegie Hall, this rather self-indulgent set of tracks is more a theatrical performance than a collection of songs.

Sans Fusils, Ni Souliers… begins timidly with gently the cascading accordion and cautiously joyous and sparse piano keys of ‘La Foule’. In tackling the oeuvre of such an important French icon, Wainwright has carefully selected the less well known and b-side tracks of Piaf’s, feeling that tackling tracks such as ‘La Vie en Rose’ or ‘Non, je ne regretted rien’ would not have been right for her, not to mention far too intimidating. The melodrama and confidence of ‘L’accordoniste’ and ‘Non, La Vie N’est Pas Triste’ are striking, the nuances of Wainwright’s voice echoing out over thunderous keys. Whilst her delivery of ‘Une Enfant’ and ‘Les Chants D’Amour’ are subtle, as her sighing vocals glisten against the fluttering of violin strings.

Sans Fusils, Ni Souliers… is a beautifully crafted album, expertly produced to capture the raw anguish, hope, joy and sadness of the live performance, although it is a release that I doubt will appeal beyond Martha Wainwright’s existent fan base, and one that will probably disappears into the depths of my collection after writing this.