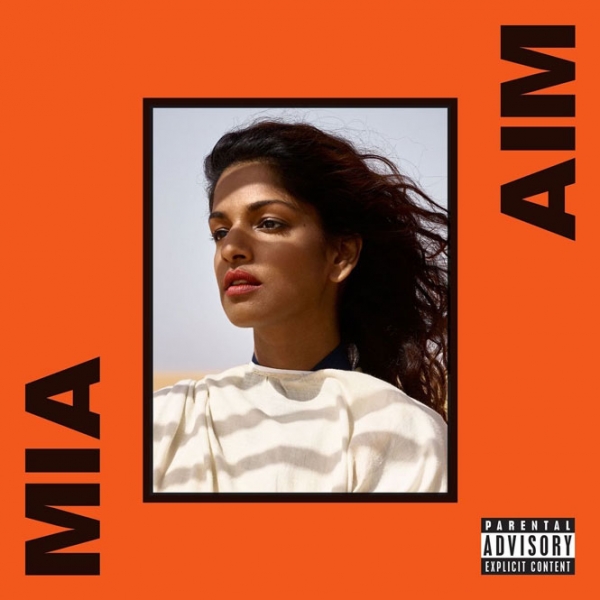 Last year M.I.A. unveiled “Borders”, the brilliant lead single from what she claimed may be her last studio album. It delivered a rousing social commentary on the UK’s handling of the refugee crisis - one of few to be offered by any mainstream artists.

Following suit comes her fifth studio album A.I.M.. Alongside tracks "Foreign Friend", "Jump In" and "Visa" which all offer different takes on the same topic; "Platforms" confronts the meaning of value in different societies; and the outstanding "Talk" grieves society's real, lasting interest in current global or current affairs, most succinctly in the last line: "Ebola scare or a bomb scare, it's the same shit just hit and share".

M.I.A.'s frustrations towards social media culture; the UK's national identity; and faddish interest in global disasters are what give A.I.M. it’s weight – but by adopting a playful rather preachy manner with her pop-culture references, she keeps things flowing and easy to take in.

There are several moments in which things become a little derailed. There’s the slightly confounding "Birdsong", which works a list of bird names into a series of popular culture references with lyrics such as "I believe like R. Kelly, we can fly / but toucan fly together"; at several points she falls into the realm of completely clichéd bragging, rapping "what haters say about me don’t worry me / I keep moving towards what’s ahead of me" in "Finally"; and throughout the album, themes of romance and her personal life which pop up occasionally feel a little distracted.

Musically it’s all very M.I.A. – there are plenty of weaving hooks, and sequenced electronic percussion covers all frequencies under a catalogue distressed and displaced samples drawn from a variety of eastern music genres. Alongside her, Blaqstarr and Skrillex offer their hands to production throughout them album, all teaming up behind the pulsating "Go Off".

If this it to be M.I.A.’s final release, it’s a fittingly confrontational, vibrant and invigorating piece of work.