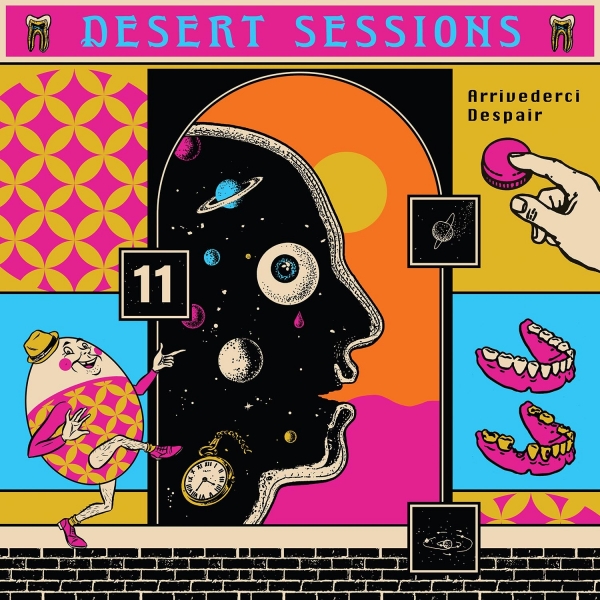 You’ve made it here because you know what the Desert Sessions are, and who’s behind them, yes? Well the guestlist for this instalment is extensive and reliably diverse: everyone’s here, from old favourites Billy Gibbons, Jake Shears, and – allegedly – Dave Grohl (who may be called Töôrnst Hülpft for this release), and new collaborators.

And what of the songs?

The opener, “Move Together”, is a beautiful take on Tom Waits’ Mule Variations sound – from the hushed, creaking vocal delivery from Billy Gibbons (who you could easily mistake for Josh Homme himself), to the delicate musical accompaniment, which is only sporadically punctured by blasts of noise. Then there’s “Noses in Roses, Forever”, which is the closest thing to classic Queens Of The Stone Age on the set – which makes it the best thing here. Robotic, lockstep rhythms and rolling riffs that sound like electricity passing through rusted wires. The guitars are undeniably gorgeous.

Instrumental slice “Far East for the Trees” is Led Zeppelin folk in space, and it grows gradually stranger with each pass of the riff. Then ‘Libby Grace’ takes lead vocals for the rather subdued, melancholic cowboy strut of “If You Run”. This is intriguing, not least for the fact that ‘Libby Grace’ doesn’t seem to exist – and is almost certainly somebody we know. Suggestions have been made that it’s Brody Dalle, but who knows? Answers on a postcard.

“Crucifire” finds Mike Kerr, from Royal Blood, taking lead vocals – and it’s probably the best thing he’s ever sang on. Considering that his day job is the leader of Diet Queens of the Stone Age, he does a bang-average job. It’d have been a great bonus track on Era Vulgaris.

“Chic Tweetz” is anything but average. If you can imagine a lost ABBA tune, reimagined by Ariel Pink, then refashioned for early morning kids TV, you’re close – except for the fact that the lyrics are gross. Is it Dave Grohl or Trent Reznor on vocals? Probably.

The collection then closes with a pair of downbeat, navel-gazing plodders. The first, “Something You Can’t See”, is led absolutely nowhere by Jake Shears. The second, “Easier Said Than Done” is only the third song here worth saving after the first two. It’s got that new Josh Homme “Vampyre of Time and Memory” elegiac quality.

Vols. 11 & 12 give few answers but leave us with many questions, such as: Where is Iggy Pop? Where is Alex Turner? Where are the rest of Warpaint? Where are all the fucking songs? Who’s even gonna listen to this shit? When can we have a new QOTSA album?