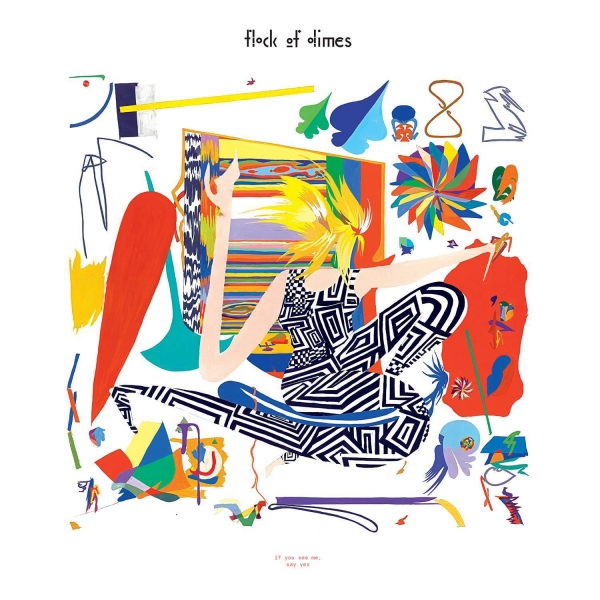 You probably know Jenn Wasner as ‘the one with the guitar’ from Wye Oak, but in her latest guise as Flock Of Dimes, she displays a compellingly multi-faceted personality.

Wasner’s website includes a letter from her friend, writer Rachel Monroe, which outlines her anxious move to North Carolina from her native Baltimore, a place that Wasner both loved and felt as though it was “eating her alive”. And this goes a long way to explaining the complex push-and-pull of If You See Me, Say Yes, it’s a work of tentative steps and excited optimism.

If You See Me… draws much less from the folk infused stylings of Wye Oak and much more from Wasner’s short lived, synth heavy Dungeonesse project from 2013, where she teamed up with producer Jon Ehrens to embrace a mutual fondness of 90s R’n’B. But with Flock Of Dimes, Wasner has left the party behind and taken definitive steps towards a maturity of sound that showcases a solid knack for crafting rousing, erudite pop music.

After the blink-and-you’ll-miss-it intro of “Sometimes It Is Right…” (its counterpart “… To Have No Answer” neatly frames the album at the very end) “Birthplace” announces its arrival with a tidal rush of frenetic tribal drums, washes of guitar and weighty analogue synths like a fresh beach breeze the morning after an 80s infused afterparty.

“Everything Is Happening Today” is an alt-pop gem that eases you in with a steady build before bursting into life with a rush of electrifying synths and a mile-high hook. Warner’s vocals lead the track as her metaphor heavy lyrics are delivered with a controlled restrain before she lets lose the full force of her range towards the end of the track.

The confident stomp of “Semaphore” delivers some sonic textures that wouldn’t be out of place on a golden-era Peter Gabriel record, and stand-out “Minor Justice” flutters with arpeggiated loops that coalesce into a wonky-pop masterstroke that approaches Róisín Murphy territory.

But If You See Me… also sees Wasner also hold back at points. “Flight” and “Apparition” run with the 80s aesthetic that permeates the album but sprawl out into more spacious territory, the latter even feels a touch improvised at times, but points like these never feel unfocused, it just seem Wasner is letting herself dip a toe into more experimental waters.

The fact that practically every note on If You See Me… was played by Wasner herself shows that, as Flock of Dimes, Wasner allows herself to fully embrace her pop sensibilities, even if at times, this gets the better of her. I just hope Flock of Dimes isn’t as fleeting as some of Wasner’s other projects because If You See Me… has the potential to mark the beginning of something very special.