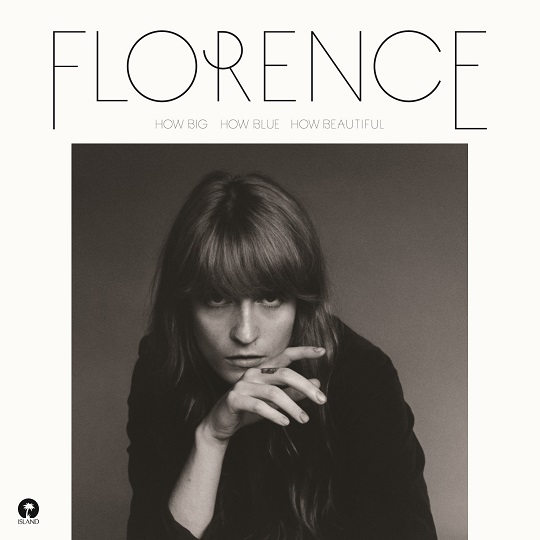 Florence and the Machine’s second album Ceremonials contained a song, “No Light, No Light”, that was a rebuttal of the irresistible force paradox - what happens when an unstoppable force hits an unmovable object? The answer is that something has to give, yet its outcome was actually a stalemate.

On How Big, How Blue, How Beautiful however, something does give. Florence has been hit by the brutal force of a broken heart, and the songs here are a stunning document of the consequences.

This context has influenced the whole feel of the record and Florence has never sounded more naked. That’s immediately apparent on the sleeve - instead of the brightly coloured hues and visual theatrics of Lungs and Ceremonials, it’s a simple black and white portrait.

Lyrically there’s reduced use of metaphor and magical realism. Florence has always been an open book in her songs, yet interestingly the severity of her experience has led to an unadorned, day-to-day narrative. The storyline is decidedly non-linear, but the opening triptych of songs reveal the three key threads of the story - being brokenhearted, the chaos that brings and the desire to try and fix everything.

“Ship To Wreck” is the most conventional song she’s ever written, but the Trojan Horse trick it pulls off is remarkably subversive for a mainstream artist, it’s about succumbing to self-destruction whilst sounding as poppy as you like.

“What Kind Of Man” is a cri de coeur of unadulterated fury, but despite the treatment she suffers at the hands of her lover, there’s seemingly no other road to walk. “You do such damage/How do you manage to have me crawling back for more?”

Nonetheless, there’s an eternal hope of salvation to be found throughout, not least the astonishing title track which is suffused with one of many of Will Gregory’s wonderful brass scores - imagine Aretha Franklin taking the vocals on Arcade Fire’s “The Suburbs”. It’s that good.

Producer Markus Dravs, who also recorded Arcade Fire and a key influence here, Björk’s Homogenic, brings an organic feel to proceedings. The acoustic approach to the instrumentation and the controlled restraint of the singing gives the songs room to breathe. The lush string arrangement of “Queen of Peace”, which is essentially baroque chamber music, is simply beautiful. “Delilah” dials down the gospel delirium of its musical cousin, Ceremonials “Lover To Lover”, with a thrilling touch of R&B falsetto.

Turning down the volume on her voice gives a heightened vulnerability to the lyrics too. “Various Storms & Saints” is a tale of being worn down by a corrosive love; “Long & Lost” is a hymn of yearning ("Are you missing me? Is it too late to come on home?"); “Caught” is a soliloquy of the desire for self-preservation ("It’s the hardest thing I ever had to do, to try and keep from calling you").

The record ends with “Mother”, a retreat to the womb to escape the mess that love can be, but the penultimate song “St Jude” feels like the natural denouement. "Another conversation with no destination… each side is a loser, so who cares who fired the gun?" The motif of the bass drum that replicated the sound of her heartbeat on Lungs “Cosmic Love” is repeated here, but it’s significantly slower. It’s an acceptance that love is sometimes destined to fail and of the wrong choices that can lead to such a breakdown ("Maybe I’ve always been more comfortable in chaos").

How Big How Blue How Beautiful is a cathartic, devastatingly honest personal diary set to music. There’s a terrible sadness at its core, but it’s underscored by optimism and the desire to get back on ones feet, no matter how severe the damage of being hit by the unstoppable force of a broken heart is. “So much time on the other side/Waiting for you to wake up, maybe I’ll see you in another life if this one wasn’t enough.”